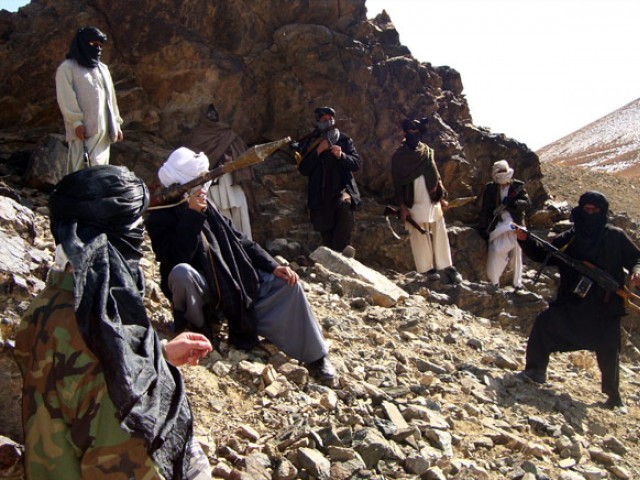 Taliban spokesperson rubbished the claims of outside help for their ‘jihad’. It's a purely indigenous struggle, and that they are not getting any help from any country. PHOTO: AFP/FILE

The Taliban have raised doubts about the identity of a key interlocutor that US government officials say they have engaged with in countries as far afield as Qatar and Germany earlier this year.

“Tayyab Agha is as close to us as ever. But he has never met with US officials,” Mujahid told The Express Tribune in a telephone interview from an undisclosed location in Afghanistan. “Somebody might have swindled the US officials by impersonating Tayyab Agha,” he added.

In recent months Washington has disclosed that senior State Department and Central Intelligence Agency officials have had secret ‘exploratory conversations’ with Tayyab Agha in Qatar and Germany. Though the talks broke down following the disclosure of Taliban negotiator’s identity, it wasn’t known whether or not Agha was still as close to the Taliban as before 2001.

Mujahid said that last year a shopkeeper from the Pakistani city of Quetta had milked thousands of dollars from Nato and Afghan officials after engaging them in talks as Mullah Akhtar Muhammad Mansur, the second-in-command in the Quetta Shura of Taliban and civil aviation minister in the Taliban regime.

He also rubbished a claim by Afghan lawmaker Homa Sultani that she had met Mullah Omar and that he had mandated her to negotiate with US and Afghan officials on their behalf. “We were simply surprised by her claim. I don’t know at whose instigation she made that claim,” Mujahid said.

The Taliban field commander in the northeastern province of Kunar, Maulvi Abdur Rahim also rejected the reports of talks with the Taliban as a “conspiracy to divide their movement”.

Talks on exchange of prisoners

The Taliban spokesperson, however, did admit that his group had been in talks with ‘foreign officials’ for the past 18 months. “But these talks should not be misconstrued as an effort to find a negotiated settlement of the Afghan issue,” Mujahid said. “The agenda of these interactions was mainly the exchange of prisoners,” he added.

Mujahid said that the Taliban would not sit across the table with US or Afghan officials as long as US-led Nato troops were in Afghanistan. “Our jihad against ‘occupation’ forces will continue till foreign forces pull out of our land,” he added.

‘Taliban are updating their weaponry’

Earlier this month Taliban shot down a CH-47 Chinook helicopter during action in the Afghan province of  Wardak, killing 31 US soldiers – most of them elite Navy SEALs – and seven Afghan troops. Some US analysts believed that the chopper was brought down not with RPG (Rocket-propelled grenade) but with I-RAM (Improvised rocket-assisted mortar), commonly known as ‘flying IEDs’.

Asked about the contribution of the Haqqani network which the US believes is based in Pakistan’s North Waziristan tribal region, the Taliban spokesperson said, “(Jalaluddin) Haqqani is a mujahid (holy warrior). And his role in the Afghan jihad is second to none.”

US Defence Secretary Leon Panetta, speaking in the US National Defence University alleged earlier this week that Pakistan has links with extremist groups, including the Haqqani network. Ties with the Haqqani network are cited for Pakistan’s reluctance to launch a military operation in North Waziristan Agency.

But the Taliban spokesperson rubbished the claims of outside help for their ‘jihad’. “These are baseless rumours. Ours is a purely indigenous struggle. We are not getting any help from any country,” he claimed.

Missing persons: Amidst the madness, some tales of reprieve