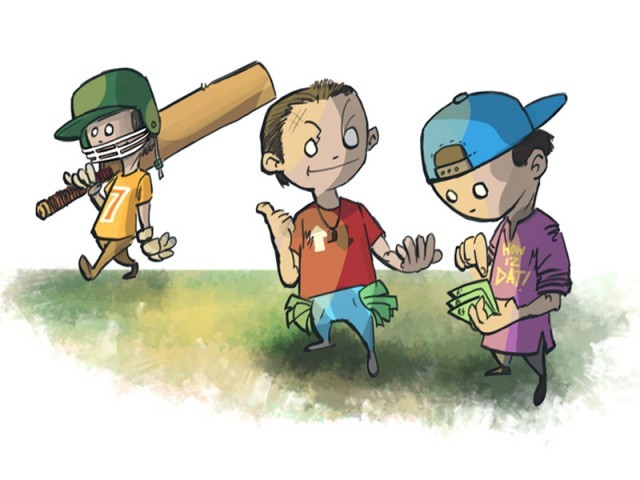 There was a time, not long ago, when youngsters idolised and tried to emulate Imran Khan and Wasim Akram, or more recently Shoaib Akhtar and Shahid Afridi, as they honed their cricketing skills playing on the streets.

It seems, however, that things have changed drastically, for the worse, because teenage cricket lovers are now following in the footsteps of tainted fast-bowlers Mohammad Asif and Mohammad Amir, the disgraced duo currently serving a ban from all types of cricket for their involvement in the spot-fixing saga.

Fixing matches, or at least placing bets on them as a series of festival tournaments take place across the country, is not new but the act being carried out on the streets has become a favourite pastime for many. While betting – placing money on their predicted winner – is common, cash for underperformance has now hit the streets.

How it is being done

Numair Ali, a fan and a player, has not missed a single night without cricket action this Ramazan while finding other ways to enjoy the sport.

“We’re having a lot of fun by betting on each delivery,” Numair told The Express Tribune. “One of my senior teammates used to bet on different deliveries by taking the bowler into confidence and I also enjoyed it on my first attempt.

“Normally, we ask the bowler to bowl a loose delivery and place money on that ball being hit for a four or a six. We also bet on a wide or a no-ball but that is quite rare. Betting on a run-out – where a player traps his partner – is another popular part of this practice.”

Numair, 18, did make it clear that it was not the money that forced him to take up this hobby.

“Such bets don’t involve huge amounts. In our group, we don’t bet more than a thousand rupees and sometimes, it’s just a bottle of drink that is used as bets. We only do it for fun and it is gaining popularity.”

Numair agreed that the involvement of former captain Salman Butt, Asif and Amir played a huge role in popularising spot-fixing and getting the youth involved in it, even if it’s for recreational purpose.

“The saga was when we got introduced to the word spot-fixing and only came to know much about it after the trio was caught.”

Meanwhile, the President of Karachi City Cricket Association (KCCA) Sirajul Islam Bokhari believed that although such offences were unlikely to have any impact at a higher level, they still needed to be condemned.

“I have yet to see it happen at club or domestic level,” he said. “But if it’s being committed on the streets, it should be discouraged because youngsters should be raised with a clean frame of mind.”

The writer is a sports reporter at The Express Tribune.