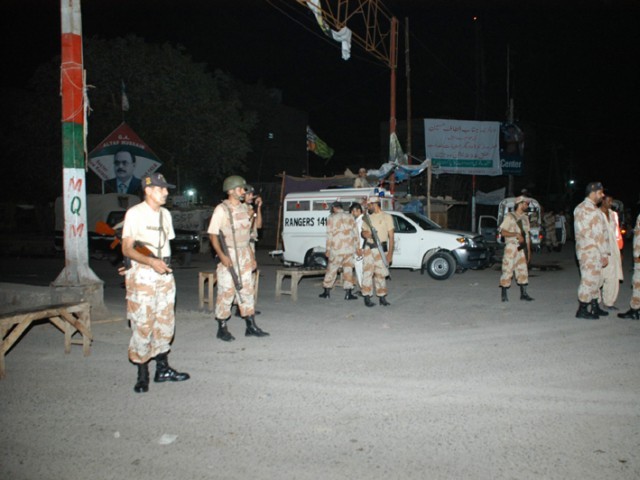 KARACHI: Four policemen were stopped, ambushed and shot at late on Friday.

According to Express 24/7 correspondent Sabin Agha, the four policemen were commandos who were heading towards Chakra goth in Korangi where two groups were engaged in heavy gunfire.

A DSP, from Qaidabad, was also injured.

Seven vehicles were torched in different parts of Karachi raising the death toll for the day to 20.

The death toll for two days of violence has reached 64.

The bodies bore signs of torture and were stuffed in jute gunny bags.

In fact, most of the killings reported were in the southern Lyari neighbourhood, a Pakistan Peoples Party (PPP) stronghold infested by powerful criminal gangs.

Karachi’s worst-affected areas are impoverished and heavily populated neighbourhoods where most of the criminal gangs are believed to be hiding.

A meeting chaired by President Asif Ali Zardari reiterated that no criminal would be spared.

The independent Human Rights Commission of Pakistan said 800 people have been killed in Karachi so far this year, compared with 748 in 2010.

Updated from Print edition (below)

The political leadership put together appears impotent to rein in the escalating, unbridled violence in Karachi.

As leaders gathered at the Presidency on Friday to discuss the worsening law and order situation, 27 more casualties were reported in the city, including five police personnel.

In the most brazen attack witnessed in the recent round of violence, unidentified gunmen fired at a bus carrying the Sindh Reserve Police personnel who had been called in to control the situation in Korangi.

Five personnel were killed in the attack and 30 injured, including deputy superintendent Badar Ali Shah.

Simultaneously, in a separate incident in Korangi, two political activists were killed and three injured.

Meanwhile, at least seven bullet-riddled bodies were found dumped in sacks across the city. Police officials said four of the victims were Urdu-speaking and were killed after having been abducted.

Officers said their hands and legs were tied and they bore several marks of torture.

There were also unconfirmed reports of 12 to 15 passengers in a bus being kidnapped in Sohrab Goth.

A heavy contingent of law enforcers patrolled the city throughout the day. Lyari was particularly tense. Families of the victims protested over the killings after funeral prayers.

Meeting at the presidency

Beefing up the intelligence network in Karachi and working out an arrangement to allow for pursuit of criminals fleeing the city were among the decisions taken at a meeting chaired by President Asif Ali Zardari at the presidency on Friday.

Governor Sindh Dr Ishratul Ibad and Chief Minister Sindh Syed Qaim Ali Shah were among those present at the meeting.

Participants at the meeting decided that Sindh government will approach the government of Balochistan for working out arrangements to allow for pursuit, by the Sindh police, of fleeing criminals.

The participants also decided to beef up the intelligence network in Karachi to provide real time information to the police, said spokesperson to the President Farhatullah Babar.

A committee comprising Sindh governor, chief minister and home minister was formed to oversee the law and order situation in Karachi.

During the meeting, the president called MQM chief Altaf Hussain in London and emphasised on the need to work together to fight lawlessness.

Elements behind the recent spike in violence wanted to drive a wedge between the Pakistan Peoples Party and the Muttahida Qaumi Movement, the president said.

Reciprocating the sentiment, Hussain said that ending violence in Karachi was critical for peace and stability and the MQM supported any move that was aimed at restoring peace in the city.

The president also invited the MQM chief to join the federal and provincial governments and said that the gesture would send a powerful signal to deter criminal elements.

Federal Interior Minister Rehman Malik said that the police and law enforcement agencies have arrested around 50 suspects involved in recent violence in Karachi.

A joint interrogation team has started the investigation and the detained suspects have provided important information regarding their network and affiliation, Malik said after a meeting with Inspector-General Police Wajid Durrani, Additional IGP Saud Mirza Rangers and intelligence officials.

He also appealed to the residents of Karachi to cooperate with the police and law enforcement agencies to indentify suspects in their areas.

Official sources said that Prime Minister Yousuf Raza Gilani may also reach Karachi on Saturday to hold a meeting on the deteriorating law and order situation.

Gilani will also talk to the local PPP leadership on the issue of proposed amendment in the local government system and rejoining of the MQM in Sindh and federal cabinet.

No need for army

Sindh Home Minister Manzoor Wasan said that the army is not required to control the situation in Karachi and the government is trying to restore peace with the help of all political forces.

Talking to the media at Islamabad airport, Wasan said that every political party possesses weapons and has the people to use them.

“We have arrested some persons who are affiliated to different political parties,” he said. With additional input by Irfan Ghauri in Islamabad, Hafeez Tunio in Karachi and wires.