Imran directs MNAs to stay away from no-trust session

As the threat of losing his seat of power edges closer, Prime Minister Imran Khan on Tuesday formally barred lawmakers from the ruling PTI from attending the National Assembly session on the day of voting on the opposition’s no-confidence motion -- likely to be held in the first week of April.

The premier issued the directives as the leader of the parliamentary party of PTI, a day after the no-confidence motion was tabled in the lower house of parliament against him by PML-N president and leader of the opposition in the house, Shehbaz Sharif.

“No member of the Pakistan Tehreek-e-Insaf shall attend or make himself/herself available at the time and day of voting on the resolution of No-Confidence,” it added.

The statement read that only designated parliamentary members would speak on behalf of the PTI during the course of debate on the motion against the premier in the assembly.

“All members are required to adhere to these directions in true letter & spirit and keep in mind the intent behind the provision of Article 63-A of Constitution of Pakistan, 1973.”

The PTI chief also warned all lawmakers that “no member shall violate any instruction or extend any favour, relating to the vote of no confidence, to any other parliamentary party / group whatsoever”.

It added that any violation of these directions will be treated as “express defection in terms of Article 63-A”.

Earlier in the day, National Assembly Speaker Asad Qaiser decided to continue the no-confidence motion session on the upcoming Saturday and Sunday.

According to sources, a consultative session on the voting on the no-trust move against PM Imran was held under the chairmanship of the NA speaker.

The opposition, which has 162 members, filed a requisition for a no-confidence motion on March 8.

The motion, moved by 152 opposition members, said that PM Imran had lost the confidence of the house. The ruling coalition currently has the support of 179 members of the National Assembly.

The no-confidence move comes as Pakistan faces a recurring economic crisis, with the incumbent government banking on the International Monetary Fund (IMF) to release the next tranche of a $6 billion rescue package to shore up dwindling foreign currency reserves.

PM Imran, who will turn 70 in October this year and a former captain of Pakistan's national cricket team, lost a parliamentary majority with a series of defections from his party, and a united opposition is calling on him to step down. He has vowed to fight to stay put.

In his power show in Islamabad on Sunday, PM Imran blamed a foreign-funded conspiracy for trying to topple his government.

However, the country’s relevant authorities have seen no evidence yet that there is an international conspiracy to oust the premier from his post.

One source, whose department deals with external threats, said if there had been an imminent threat, certain actions would have been taken by now.

But there was neither any "unusual movement", nor any other action taken by the authorities concerned against the backdrop of the purported foreign-funded plot.

Another source added that if the threat was so serious, why a meeting of the National Security Committee (NSC) was not called immediately. It is believed that quarters concerned and some officials in the Foreign Office were upset that even if there was a certain plot, the premier should have taken up the issue at the relevant forums instead of raising the subject in public.

The prime minister, under oath, is not allowed to divulge details in public that have been shared with him as the country's chief executive. Some say his effort to raise the issue in public is tantamount to violating his oath of office. 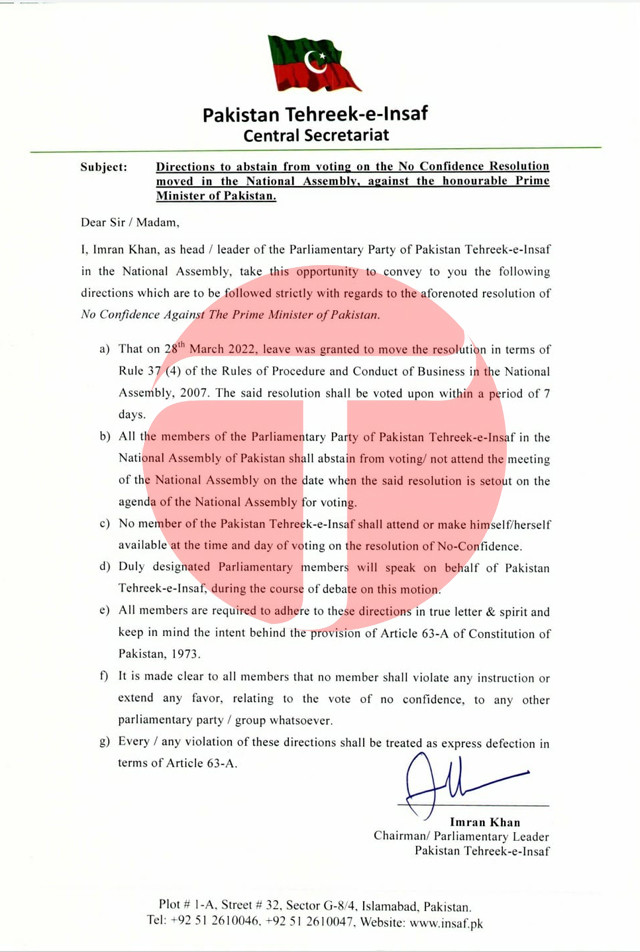