Bill Manhof­f, the Americ­an playwr­ight, must be turnin­g in his grave. He must be crying out in agony. At the very...
By Enam Hasan
Published: June 27, 2010
Tweet Email 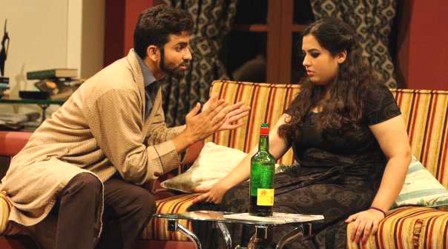 Bill Manhoff, the American playwright, must be turning in his grave. He must be crying out in agony. At the very least, he must be somewhat grateful at not having lived to see the Karachi Arts Council’s latest adaptation of his play ‘The Owl and the Pussycat’, under the helm of Napa graduate Fawad Khan, who mounted a recent production of it from June 17 to 20 in Karachi.

The play begins with Chandramukhi, a sex worker, storming into the London apartment of Fred Solomon, an aspiring writer, in the middle of the night. She announces that she will camp there for the night because her landlord has evicted her.

Solomon is not open to this possibility, to say the least. He is snobby, elitist, and particular. He has binoculars and as it happens, has been spying on Chandramukhi. In fact, earlier that day, Solomon himself had reported her to her landlord for immoral activities. Thus begins the battle, supposedly of wits, between an unconvincingly feisty sex worker and a self-proclaimed writer who struggles for groundbreaking ideas and wrestles with self-constructed but uninspiring phrases such as ‘the sun spit morning…’ Sure, Manhoff’s controversial play, based on his relationship with his wife Margaret McLaughlin, attracted some criticism upon reception due to its subject matter, which is not the same thing as the criticism drawn by this play, for its poor direction and lacklustre performances.

Fizza Zehra is, in a word, miscast. She was more convincing in last year’s ‘Odd Couple’, though she still seems to lack the necessary presence, in particular, the voice projection required for a truly satisfying performance. Joining her onscreen was the director, who appears to have taken on too much. This could, to be fair, be symptomatic of the credit crunch on theatrical productions, whereby the producer cannot afford to take on professional actors and must make do in less than ideal circumstances. Otherwise, a slew of Napa grads — Saqib Khan, Mohsin Ali, Ali Sheikh, for example – could have done a much better job.

All good playwrights have a message to their narrative behind the mere words and actions. In a bid to carry it forward, the directors interpret or take on what lies deep within the script. At the heart of this play, Manhoff appears to question the self-sufficiency of the intellectual. Through Solomon, his male protagonist, he makes a case for not being able to live a life of the mind alone, denying oneself the simple joys of life. Reason without feeling tends to arrive at conclusions that do not necessarily reflect reality, a gap exists between the thinking and feeling mind, “Even with fantasies, and dirty words and the guilty stink of the sewer you can only sometimes whip yourself into a parody of passion.” This lies at the heart of the play, but is not drawn out at any point in this production, which is a shame since it’s a message worth putting out. It deserves a more skilful execution than this.