Stereotyped in their own country

Stereotyped in their own country 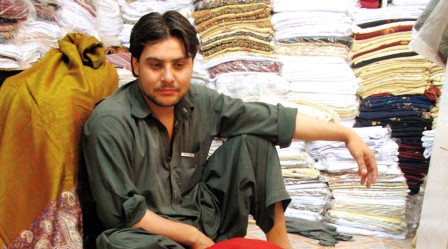 A shopkeeper showcases shawls at a bazaar in Peshawar. PHOTO: SABA IMTIAZ

There’s an acceptance in conversations, conducted in lounges and living rooms, that life in Peshawar has changed, but it hasn’t died.

Young adults critique music and discuss politics, dabble in recreational drugs and eat out at popular eateries such as Masoom’s and Chief Burger. While the latter is a legendary fast food joint, Masoom’s features outdoor seating, with fairy lights strung on trees, where diners can smoke sheesha.

Driving to Rawalpindi to catch a film at Cinepax and gorge on McDonalds is a regular exercise.

The Faisal Shahzad case has resonated here, and several residents shared stories of how Shahzad was a regular guy they knew of at school, who returned to Pakistan from the US a completely changed person.

But while Peshawar residents, regardless of age and social background, realise that the bomb blasts have taken a toll on the city, they are far more taken aback at how the city has been stereotyped in Pakistan as unsafe, a bombed-out shell and the residents as cave-dwellers.

MBA student Shoaib Anwar summed it up best, “It is like the comments you hear about Pakistan in the US … Peshawar has been stereotyped in the same way in Pakistan.”

Musician Aamer Shafiq reenacts double-takes people do when he tells them he’s from Peshawar, and recalls a Karachiite girl asking him if he had access to electricity. “I told her, ‘my father works at the Water and Power Development Authority in the same room where they turn the electricity on … so yes, we have electricity’”.

The shopping markets are crowded with women (and pickpockets, one shopkeeper warns) buying fabric and jewellery. Old bazaars, like the famous Qissakhwani, sell every household item under the sun, while sprawling shopping malls house stores like the retail brand Outfitters, Chen One and dozens of fabric and accessory shops.

“We go shopping, even though we’re scared of something happening,” said BBA student Malghalara Hussain. “It was not like this before. But the reason people have developed a negative image of Peshawar is because of the security situation.”

Sana Khan, a graduate of the Kohat University of Science and Technology, believes that trends have changed over the past few years. “More women,” she says, “are enrolled at university. Parents are now encouraging their daughters to study courses which will help them get jobs.”

Imran Khan, who gave up his career as a lawyer and is now opening a restaurant that will cater to young adults and families, finds it unbelievable that even in Islamabad, which is a short drive away, people are clueless about Peshawar. A student from the Institute of Management Sciences’ laughingly shared some questions asked to him on visits to Lahore.

“When we go to Lahore, they are amazed that we can speak English, we can use Facebook. We have everything in Peshawar. We may be a bit more conservative and Lahore may be more multi-cultural, but we have everything here.”