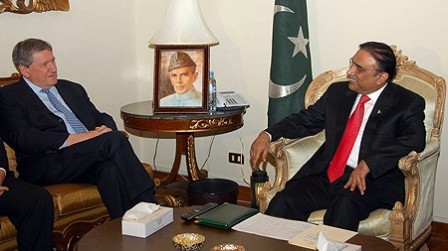 Holbrooke and Kayani discussed matters of mutual interest. During the meeting Holbooke took the army chief into confidence over the change of command of US forces in Afghanistan. They also discussed issues regarding the removal of General Stanley McCrystal.

President Asif Ali Zardari also met Richard Holbrooke at the the Presidency and reiterated the government’s resolve to eliminate terrorism.

In the meeting, the president urged the US to support Pakistan, as it has already suffered a lot from being the frontline state in the war against terrorism.

On his part, Holbrook assured the president of compensation for the losses Pakistan has incurred in the fight against militancy. He said the US wants long term relations with Pakistan and the current strategic dialogue is part of this effort.

Richard Holbrooke landed in Pakistan on Wednesday from Kabul to meet Chief of the Army Staff Ashfaq Pervez Kiyani whom he did not meet in his last visit as the latter had gone to China. He is also expected to meet Foreign Minister Shah Mehmood Qureshi.

After meeting with the higher officials, he will directly go to Nato headquarters in Brussels from Islamabad.

Sources added that a set of issues including current regional security situation, Pak-Afghan ties, talks with Taliban in Afghanistan and Pak-Afghan border issues will come under discussion during the course of the meetings.