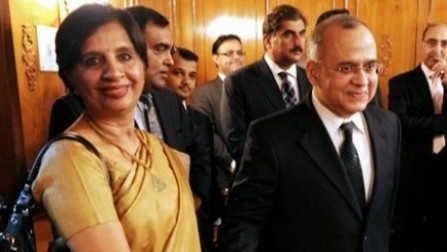 ISLAMABAD: Pakistan has welcomed the warmth and openess with which India has approached the talks between the two governments.

Bashir said the talks were fruitful as core issues were discussed during the meeting. Moreover, both the sides have agreed to bridge trust deficit between the two countries.

While, Rao has said both the sides should stand against terrorist elements, as joint efforts are needed to root out terrorism from region. Elaborating on the talks she said, bilateral dialogue is the only way forward, as India agrees to strengthen relations with Pakistan.

India’s Home Minister Chidambaram is also due to arrive in Islamabad for a Saarc meeting on Friday. He is expected to meet Pakistan’s Interior Minister Rehman Malik.

Nirupama Rao and Salman Bashir had an informal meeting over dinner here on Wednesday and discussed ways to ensure that upcoming Pak-India dialogue would be successful.

Indian Foreign minister SM Krishna said that ‘nothing spectacular or dramatic’ is expected from talks with Pakistan because of the complexity of bilateral ties.

He said Foreign Secretary Nirupama Rao’s visit to Pakistan was primarily to prepare the ground for his visit to Islamabad.

Krishna is scheduled to visit Pakistan in July to meet with Foreign Minister Shah Mehmood Qureshi.

‘Pakistan is a great country to work with’