Britain not to interfere with Pak decision: Hague

Britain not to interfere with Pak decision: Hague

Pakist­an’s relati­ons with Britai­n’s first Conser­vative setup in over a decade got off to a promis­ing start with the...
By Naveed Akbar / Sumera Khan
Published: June 24, 2010
Tweet Email 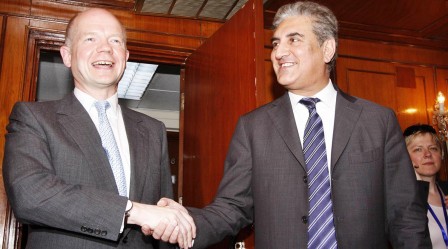 ISLAMABAD: Pakistan’s relations with Britain’s first Conservative setup in over a decade got off to a promising start with the new government pledging deeper and long-term bilateral ties with Islamabad.

British Secretary of State for Foreign and Commonwealth Affairs William Hague, who arrived in Islamabad on Wednesday on a three-day visit to Pakistan, also asserted, in reference to the Pak-Iran gas deal, that his country would not interfere with Pakistan’s “sovereign decisions.”

During his first visit to Pakistan as foreign secretary, Hague met with Prime Minister Syed Yousaf Raza Gilani, Foreign Minister Shah Mahmood Qureshi, Minister of Interior Rehman Malik, and PML-N chief Nawaz Sharif.
Appearing at a joint news conference with his Pakistani counterpart after the meeting, Hague said, “I’m delighted to be in Pakistan again and on an extended visit, my longest overseas visit so far since my appointment. The new British Government is committed to a long-term, productive and friendly partnership with Pakistan.”

“One of my key objectives while I am here is to deepen and broaden the UK-Pakistan strategic dialogue; we view Pakistan as a long-term, strategic partner with whom we want to have even closer relations.

The multiplicity of British connections to Pakistan through families and history gives Britain a particular role in supporting Pakistan’s democratic future,” he added.
Commenting on the Pak-Iran gas pipeline, he said, “Britain will not interfere in any sovereign decision of Pakistan but at the same time the UK supports the UN Security Council resolutions on Iran.” He also said that new measures against Iran  would affect the investment by European and North American companies in the fields of gas and oil in Iran.

Foreign Minister Qureshi justified the deal with Iran, saying Pakistan acutely needs natural gas from Iran to overcome its energy crisis. However, he added, Pakistan is also aware of its international responsibilities.
He said Pakistan was working on a multi-pronged strategy to address its energy shortfall, and will take a decision keeping in view all possibilities.

Pakistan will also hold talks with the European Union in this regard, he said, adding that the Friends of Pakistan forum was also considering the issue and is going to hold its next meeting in Brussels in October to discuss Pakistan’s energy needs.

On the meeting of the Nuclear Suppliers’ Group (NSG) in New Zealand and criticism of the Pak-China civilian nuclear cooperation, the British foreign secretary said he was fully informed on it and will like to see the outcome of the NSG meeting. Britain, he said, understands that Pakistan severely needs energy but there were also some regulations parallel to it.

He said that any comments on this matter would be premature.
To a question regarding ties with India and their possible impact on Pakistan, Hague said that Britain has relations with many countries and these do not impact ties with others.

He said that Britain would not lecture India or Pakistan on how to resolve contentious issues such as the water dispute as he believed that both the countries have the ability to resolve them on their own.
In the end Hague spoke very highly of Pakistan’s sacrifices in the war against terror and also paid rich tribute to the resilience shown by the Pakistani people in fighting extremism and terrorism.

“I salute the efforts of Pakistan in fighting extremism and terrorism,” he said.
Hague also termed the comments of the allegations on Pakistan in a recent report of London School of Economics as “useless.”
He said Britain will provide development aid of 665 million pounds in the next four years, out of which 250 million pounds will be spent on education, while five million pounds will also be spent on development of areas bordering Afghanistan.
The British foreign secretary will spend the rest of his time in Karachi where he will meet with Pakistan’s trade leaders.