Bilawal blasts govt over mini-budget, says it is 'confused' over economy

Information Minister Fawad Chaudhry on Wednesday said that high-profile cases of Usman Mirza, Sharukh Jatoi and the Lahore-Sialkot motorway gang-rape were challenges for the justice system.

“Why aren't these cases being heard on the daily basis,” the minister questioned in a tweet. “The prosecution and the court should fulfil their responsibility,” he added.

Fawad maintained that it is the state's duty to bring these cases to a logical conclusion. 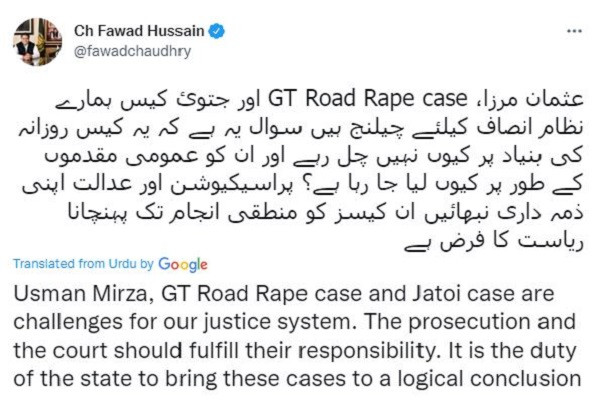 The minister was responding to a tweet of media person Maria Memon in which she said the state should be the plaintiff in such cases because “the whole society has been psychologically affected by the terror of this incident!”

She was referring to the report published yesterday, which mentioned that the victims in the couple harassment case retracted their statement against the accused, including the main suspect Usman Mirza.

The couple in their written affidavit told the trial court that they did not want to pursue the case against Mirza and co-accused Hafiz Ataur Rehman, Adaras Qayyum Butt, Rehan, Umar Bilal Marwat, Mohib Bangash and Farhan Shaheen.

The accused had been booked and charge-sheeted after they were arrested for stripping the couple naked, torturing them in Sector E-11 of Islamabad and later uploading their video on social media in July last year.

On the retraction of the statement, journalist Rauf Klasra claimed in a tweet that according to police sources, a deal of more than Rs10m was made for reconciliation between the defendant and the prosecution.

“All the hard work of the police has been turned upside down,” he added.

It is also pertinent to note that on Monday it was reported that Shahrukh Jatoi, the murder convict of the 2012 Shahzeb murder case, was living a “lavish life” on the upper floor of a little-known private hospital in Karachi’s Gizri area on the pretext of medical treatment.

Home department sources told The Express Tribune that a senior official of the Sindh government played a role in transferring the murder convict from prison to hospital under the guise of medical treatment.

His presence at the hospital was only known through a leaked video. Following the release of the video, the jail authorities moved Shahrukh back to the prison.

At least 10 killed as terror comes back to haunt Balochistan