“If you are a trader, wholes­aler or retail­er, you need not worry how much to pay, the mafia will decide your rate".
By Farhan Zaheer
Published: August 18, 2011
Tweet Email 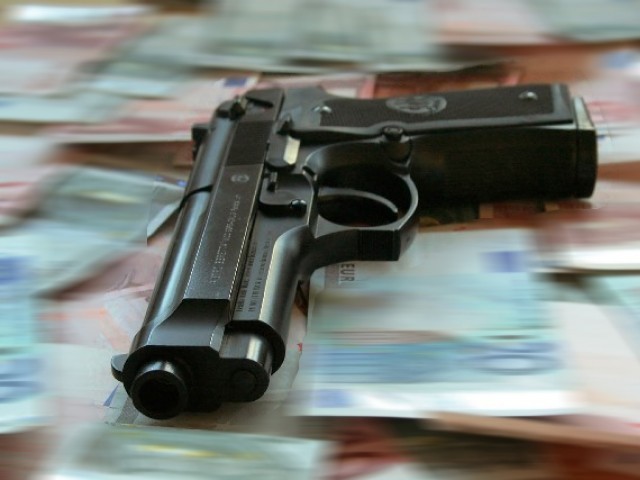 CCTV footage shows a man, who is known in the area as Shahbaz, walking up to the counter of the restaurant and demanding money at gunpoint.

Traders and industrialists say that although bhatta, or extortion, is one of the top irritants to businesses throughout the year, the activities of the bhatta mafia increase manifold in Ramazan. This year, however, the extent of its activities has forced traders to protest. Some of them have even gone for complete shutter-down strikes.

There have been many incidents in recent weeks in which the bhatta mafia attacked shops with hand grenades after their owners refused to pay them hefty amounts. In some cases, shop owners were killed in broad daylight.

Talking to The Express Tribune, All Karachi Tajir Ittehad chairman Atiq Mir said that almost all religious and political groups collected bhatta throughout the year, but their activities surged phenomenally in Ramazan.

“If you are a trader, wholesaler or retailer, you do not need to worry how much you have to pay in Zakat and Fitra. After considering your annual sales carefully, the mafia will itself decide your rate. The more you earn, the more you have to pay,” Mir said.

Normally, Zakat and Fitra collection is between Rs200 and Rs5,000 per shop, he added.

“These people have complete data of businesses’ supply chain, annual sales etc. Whenever they are done with compiling your complete information, they come to you with ‘slips’ and you have to pay what they demand,” he said.

A wholesale association representative, who did not want to be named, said, “The bhatta mafia is now a complete industry. It is a system in which the police are their partner.”

“The worst part is that all these groups have their own targets of bhatta collection. Eventually, traders have to help them meet their targets by paying more,” he said.

Representatives of traders’ associations are convinced that the worst affected markets are in the old city areas like Kharadar, Khajoor Market, Sarafa Bazaar and cloth and grain markets.

These congested areas have the biggest wholesale markets in Pakistan where traders from all over the country come to buy imported and locally manufactured wholesale goods.

Traders say that over 80 per cent of the total bhatta collected in Karachi comes from these centres.

In recent years, Karachi witnessed one of its worst political and ethnic rifts. More than 300 people were killed in July because of violence in the country’s main commercial hub.

“Interestingly, such rifts don’t exist in bhatta-seeking groups,” a trader said, adding that these mafia groups had people from all ethnicities living in Karachi.

“If anyone wants to learn brotherhood and ethnic partnership, he should learn it from this mafia,” he said. “It has people from Urdu-speaking, Pashtu, Sindhi, Baloch and Punjabi communities. Yet they work so efficiently that you cannot believe your eyes.”

However, these groups are not limited to old congested business centres. According to traders, these bhatta groups have now extended their influence in posh areas as well. They had little influence there two years ago, they said.

According to an eyewitness account, a couple of armed young men barged into a superstore in Defence Housing Authority (DHA) Phase 5 recently and took away money from the owner. It was later learned that the amount they snatched was in line with the ‘slips’ which they had distributed a few days ago in the area.

He added that the young men fled the scene with ease despite the fact that a police mobile was standing guard right in front of the store.