From Malala proving less is more to Katrina rocking a sari, here are our wedding favourites

Just when we thought 2021 would be free of weddings due to the coronavirus pandemic, a slew of celebrity weddings were announced one after another. And not just in Pakistan, as a string of Bollywood and Hollywood personalities decided to jump onto the marriage bandwagon too. However, one thing that did change (and something Covid-19 forced us to alter!) was the scale of weddings – most stars opted for low-key, intimate events, celebrating with their close friends and family.

Here’s a lowdown of the top wedding looks of the year. 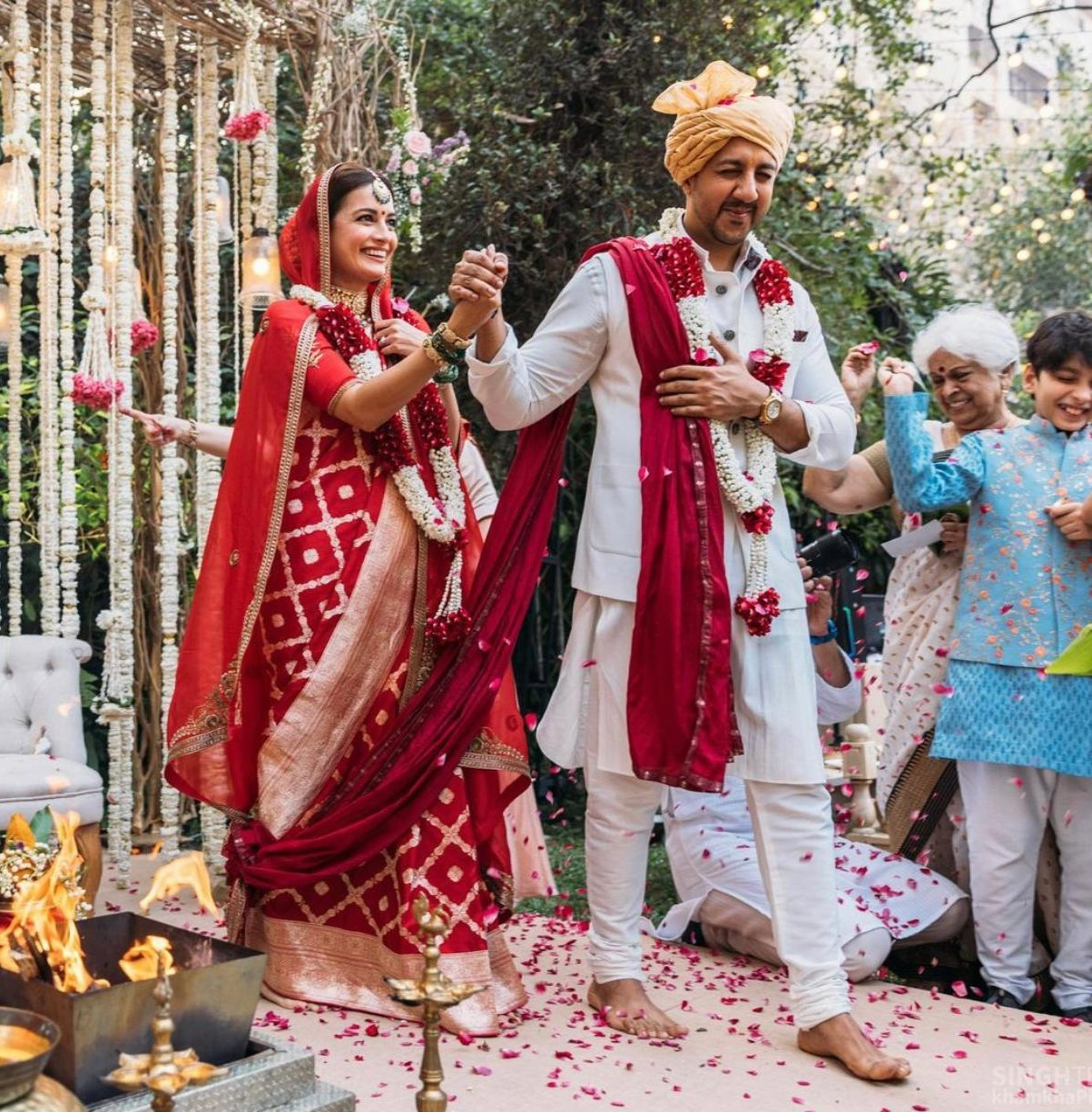 The B-town starlet exchanged vows with Mumbai-based businessman Vaibhav Rekhi, in an intimate event in February, 2021. She donned a bright red sari for the occasion, coupled with a net dupatta featuring gold detailing. Keeping her makeup to a minimum, Dia opted for an emerald green teeka and choker. She completed her look with a beautiful jasmine setting in the hair. Rekhi looked rather dapper in a classic white kurta-pajama paired with a yellow-gold turban tied around his head. 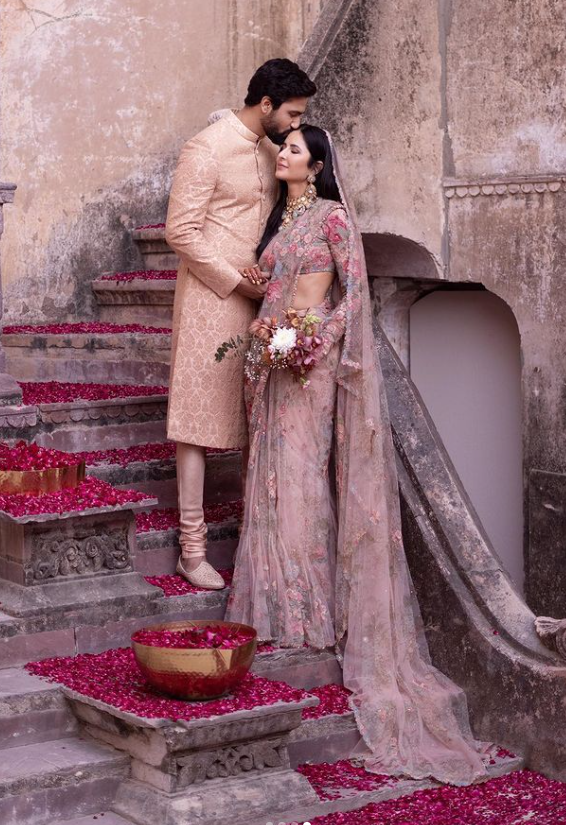 It was Sabyasachi galore at the Vicky-Kat wedding. The Indian cinema pair was dressed in the ace couturier’s creations for each one of their festivities earlier this month. And while Katrina’s typical red garb for the main event was something that we have seen too much of on Indian brides, the sari she picked for the last day of her wedding events was a sure-fire stand-out. From the pastel pink, baby blue and white flowers embroidered on the blouse and pallu to the shimmery edges, she looked every bit a princess in the outfit. Vicky’s beige sherwani perfectly complemented his ladylove’s look for the day. 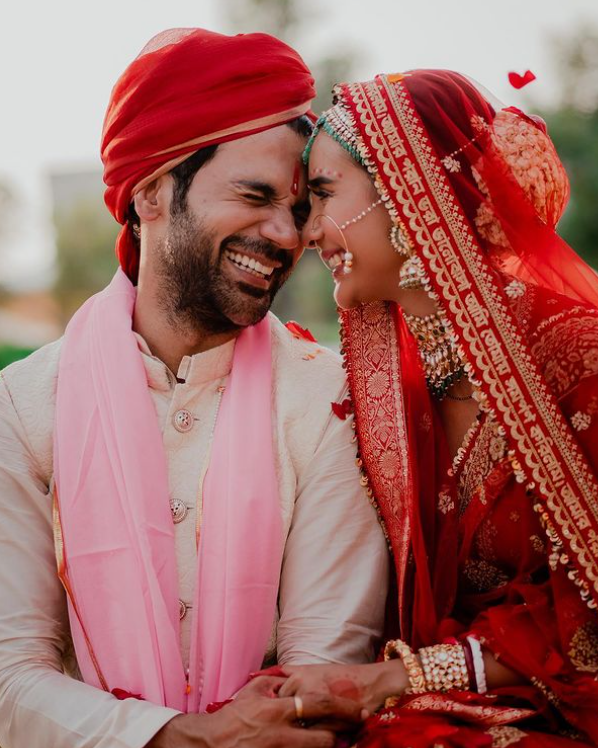 This Bollywood star’s happily ever after was nothing short of filmy. From his wedding to wife Patralekhaa coming as a shock to many (despite them dating for over a decade!) to their cheesy pictures together, we enjoyed every bit of Rajkummar’s wedding look. He looked suave in a white sherwani and an off-white waistcoat with silver buttons. But if there is one thing that stood out for us, it was that the star did not decide to be all ‘matchy matchy’ with Patralekhaa’s outfit. While she was dressed in an all-red lehenga choli, the actor decided to go with a pink patka around his neck. Opposites attract, yes they do! 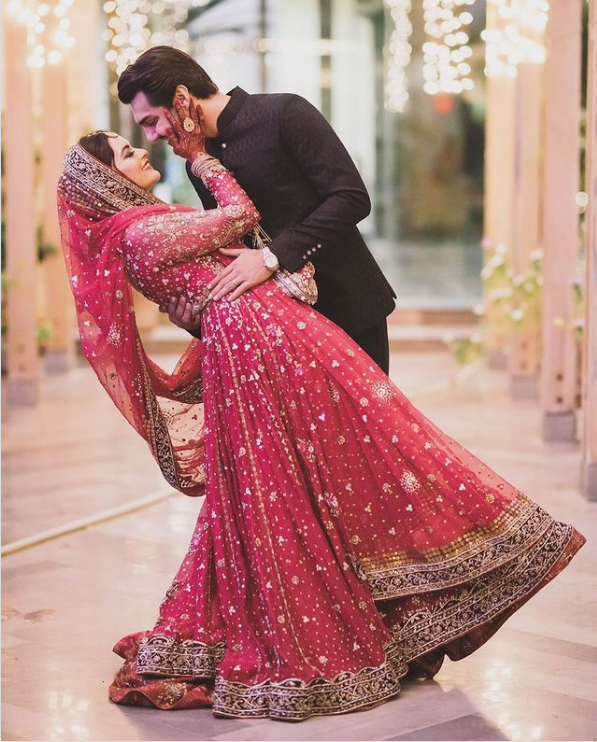 While the Pakistani TV actor and her beau Ahsan Mohsin Ikram had a bevvy of events in September, Minal’s look from her wedding day was nothing short of breathtaking. She sported an exquisite red lehenga choli designed by Annus Abrar, pairing her ensemble with traditional kundan jewellery by Ali Javeri. The outfit was heavily adorned with silver embellishments, with hints of cutwork adding a modern twist. Dark eyes and a red pout completed her bridal look. Red and black compliment each other like no other, and we’re glad Ahsan opted for the latter. 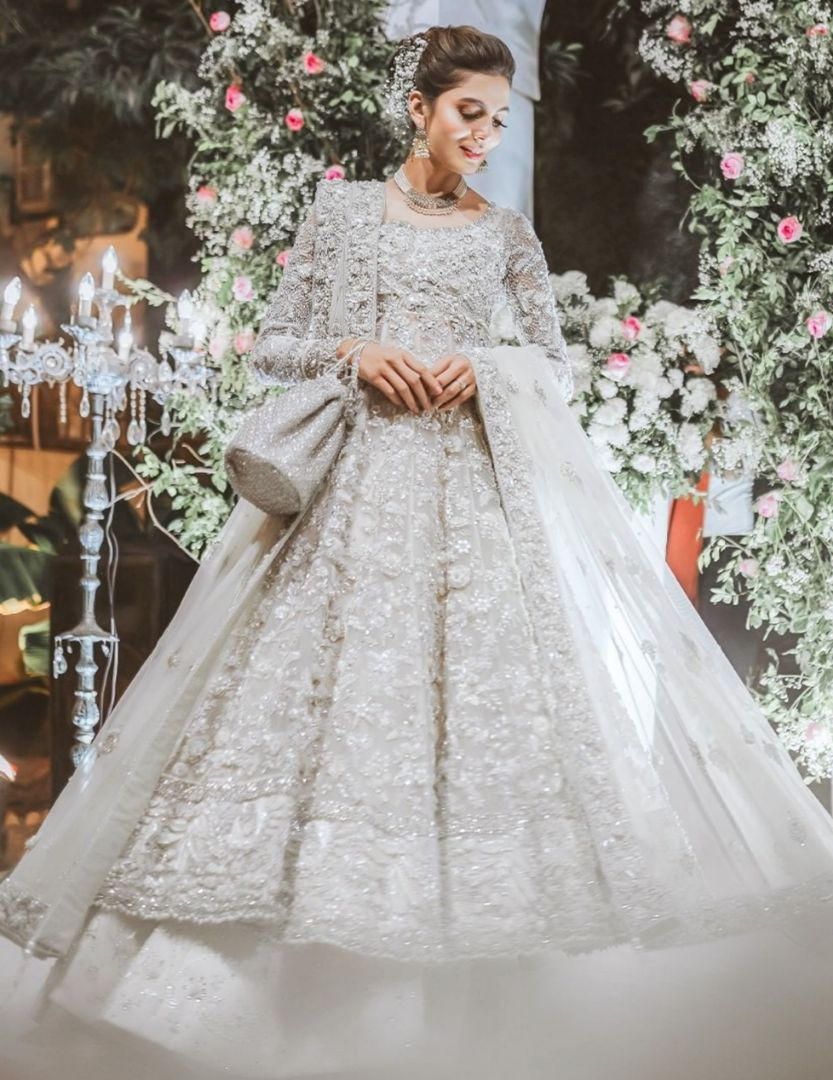 The newest bride on the block, the Pakistani supermodel knocked it out of the park with her reception look. Looking ethereal as ever in an ivory Élan peshwaas, Mushk wore her hair up in a bun for the occasion. Since she opted to not wear a dupatta on her head, we love how Mushk opted for baby’s breath for her updo. Her husband, Nadir Zia, upped the ante in a grey suit and white shirt combo. The pair got married this month. 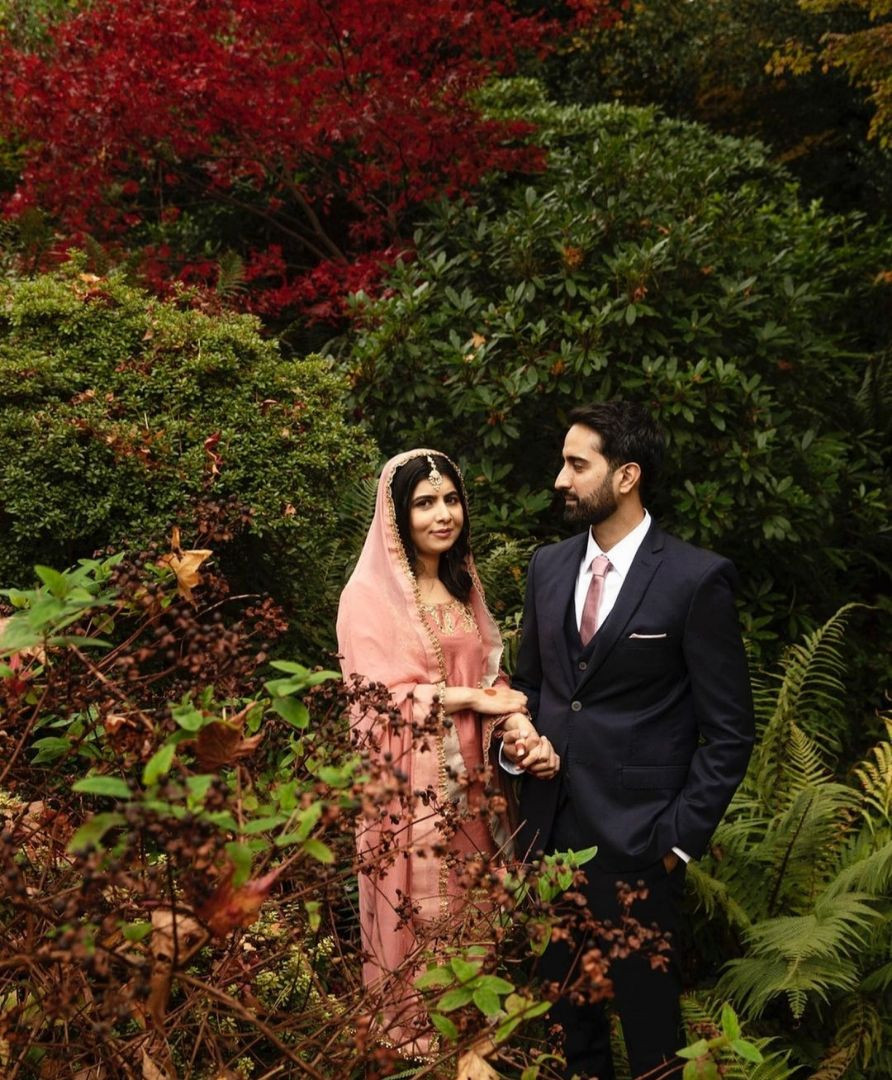 Who says brides have to be clad in over-the-top outfits and jewels for their big day? Pakistani activist Malala sealed the deal in the simplest and most non-cliché of ways in London last month. She went for a tea pink kameez, complete with mirror work and gold accents, alongside a matching dupatta and plain shalwar. She let her hair down and accessorised her look with a small-sized teeka. ‘Less is more’ has been the motto of 2021 (courtesy Covid-19) and Malala did just that! 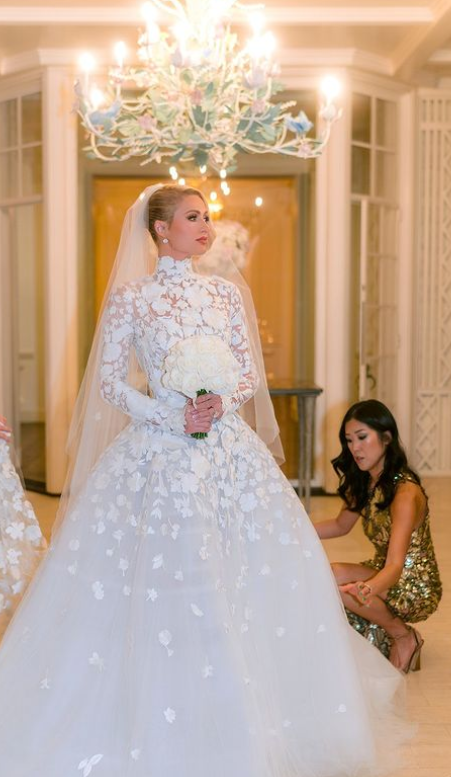 The Hollywood actor and socialite said ‘I do’ in November this year, and we say ‘Yes!’ to her wedding gown. Paris looked ravishing in a white Oscar de la Renta gown. Sharing an image of her look on Instagram, Paris wrote, "My forever begins today”. The turtleneck was something different from the typical V-neck cuts, as were the floral motifs on the dress. A white veil that trailed to the floor and a bouquet of white roses added to the finishing touches. 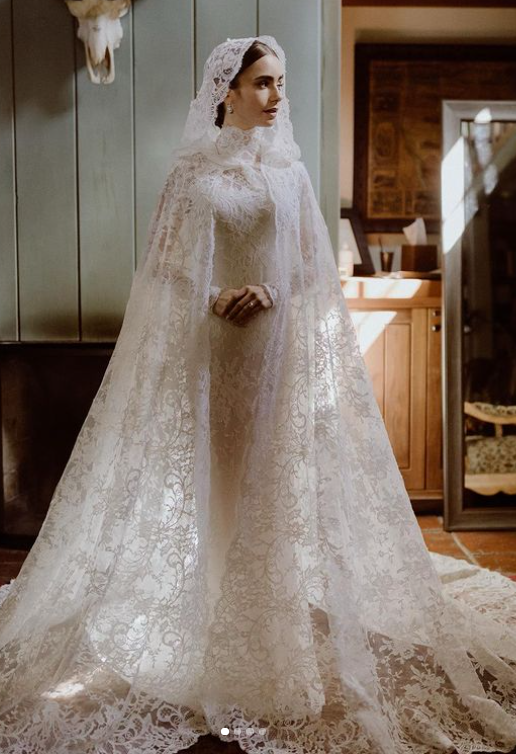 Ever seen a ‘white’ riding hood? Well, neither had we until we set our eyes on Lily on the day she tied the knot with director Charlie McDowell. The Emily in Paris actor wore a long-sleeved, hooded lace gown by Ralph Lauren. Adding to the oomph factor, a cape draped over her shoulders and fell to the floor, almost in line with the hem of the dress. It’s one of the few wedding dresses the brand has designed, along with Priyanka Chopra's. Lily chose to go for a no-makeup makeup look and tied her hair in a bun. Charlie and Lily became husband and wife in September this year.