Makli: Our own city of silence

Spanning nearly 12 square kilometers, Makli is one of the world’s largest necropolises.

The meaning of heritage is profoundly symbolic. In a recent Instagram activity, the husband of Britain’s princess Beatrice Edoardo Mapelli Mozzi shared few photos of the Acropolis and the magnificent Parthenon of Athens in Greece showing the grandeur structures seen by many as a representation of the origins of Western civilization.

At home, the enormously outsized area of the Makli necropolis is as amazing as its scheme dimension. Covering nearly 12sqkm, Makli is one of the world’s largest necropolises, performing as the final resting place of a debatable figure of more than half a million people, including kings, queens, saints, and scholars. Presumably, from 14th-18th century, enrolled as a Unesco World Heritage Site in 1981, Makli is admired for its imposing tombs and intricate artwork. Monuments are congregated as clusters with some visible chronological arrangement of construction layout. The structures seem more like an upscale property project than graves. Also branded as the ‘city of silence’, it is one of the finest examples of a grave town found in the history of necropolises. Auspiciously, Sindh owns this quintessential funerary site that saw building activity for over 400 years till recently now restricted due to its heritage status. 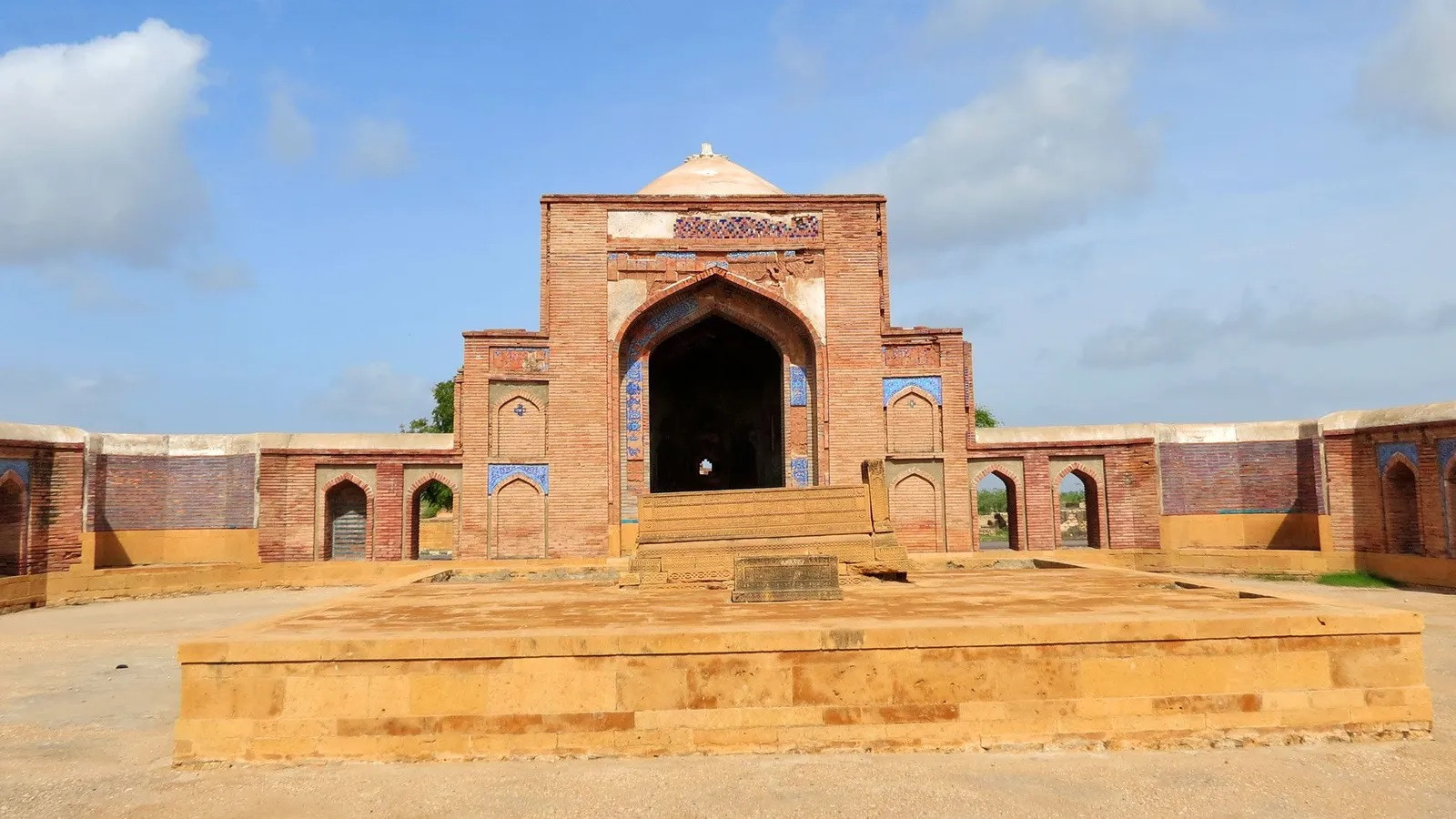 In the lower Sindh’s district of Thatta, a medieval river port city of the Indus, the necropolis developed as a burial site and exhibits the grandeur of an affluent class. Numerous ancient historical pieces of literature provide adequate testimony about geography, natural wealth, navigation, and trade of Sindh with reference to the river Indus and endorse that a powerful and influential history of Sindh’s river basin what some researchers attribute to Samma Dynasty rulers, who positioned their government at Thatta as their capital.

The grave city has a concept of a confluence between the living and the dead with a well planned construction based on social and religious traditions, and the thorny legacy of who is included in this extravagantly adorned resting place. An examination of the delicate artwork and use of poised construction material suggest that there was no toxic tangle of priorities or segregation. The necropolis has an effective design. Six types of monuments can be found across Makli. They include tombs, canopies, enclosures, graves, mosques and khanqas or learning spaces, where saints would teach and preach to their disciples. Many of the newer monuments are located at southern part.

Two of the most impressive monuments from this period are the tombs of Dewan Shurfa Khan, who died in 1638, and of Isa Khan Tarkhan II, who died in 1644. Both men ruled as Mughal governors in Thatta. The tomb of Isa Khan Tarkhan II, has two-storey stone building with majestic dome and balconies. The tomb of Jam Nizamuddin, a Samma ruler between 1461 and 1508 is an outstanding monument. The tomb of Darya Khan, referred by scholars as a brave Samma general, is a well-designed fort like protective structure. It is assumed that he was adopted by Jam Nizamuddin, and had defeated Arghun army in battle. On the north of the hill, about 6km from Makli’s southern entrance the cluster of Samma monuments are turning point for the researchers. The origins of the Samma Dynasty are not clear. Many scholars maintain that the rulers were native people belonging to the Rajput clan. 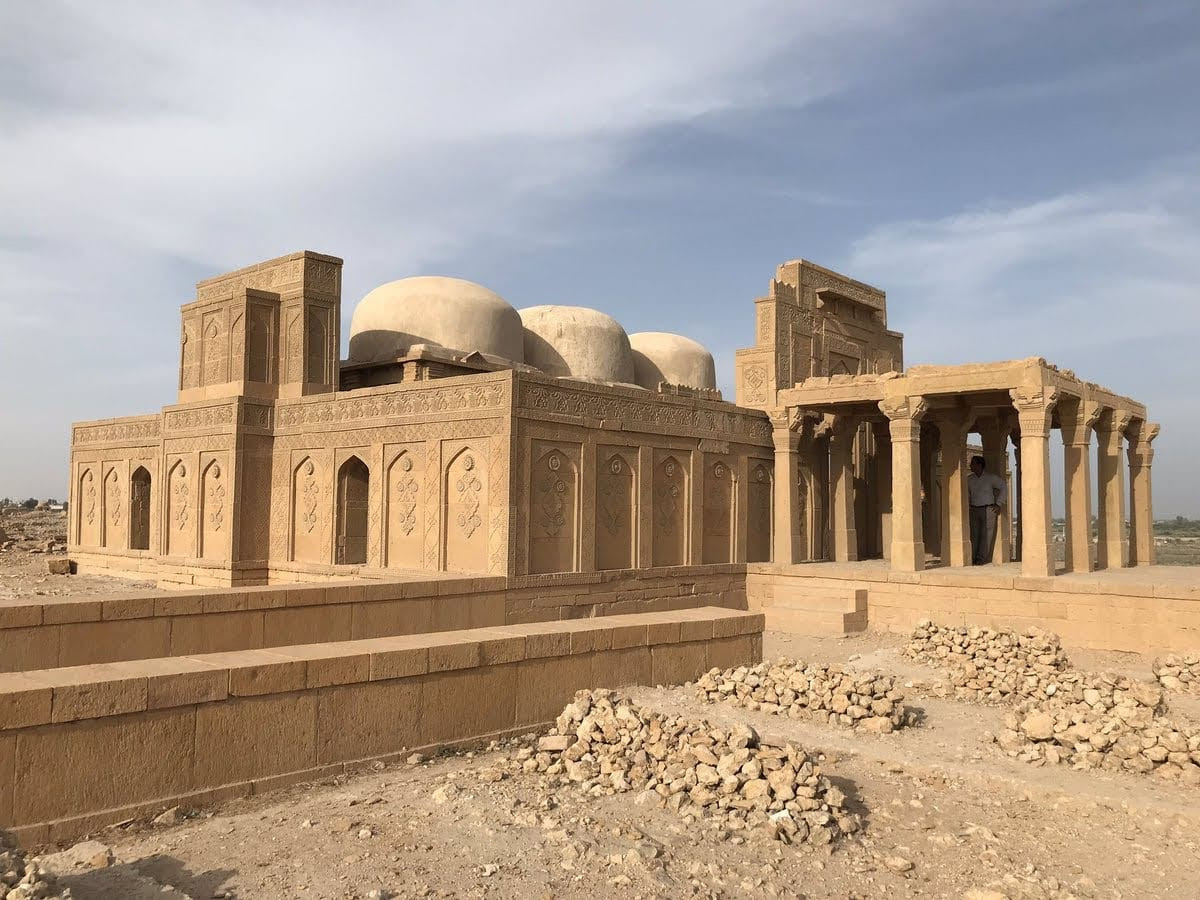 Although the grave scheme is being attributed to Samma rulers, the identity of the architects of this classic necropolis remains shrouded in the mists of history. Yet its unique art and designing are indicative of a class typically comprising people of noble birth and holding hereditary titles and positions. Scholars suggest that 14th-century Samma prince Jam Tamachi laid Makli’s foundation. A cluster of monuments were presumably raised during Arghun, Tarkhan and Mughal rulers of Turko-Mongol origin who invaded Sindh between 1524 and 1739. Then the influx of migrants or travelers, who visited the region during mediaeval time, brought along diverse fine arts to this region. The fantastic creativity expresses that the country itself had a colorful and vibrant picturesque environment ready for the impressionists to copy-past the nature’s elements to their works. This was the case in the designs and patterns of Makli’s funerary architecture that seemingly grew parallel to the Chaukandi’s creative show. The delicate floral art, geometric patterns, and designs adorning the architecture, and stone carvings found in Makli are drastically similar to those of found in Chaukandi. The basic difference between the two sites is at Makli there are dates inscribed on some of the structures, while Chaukandi lacks any such record. 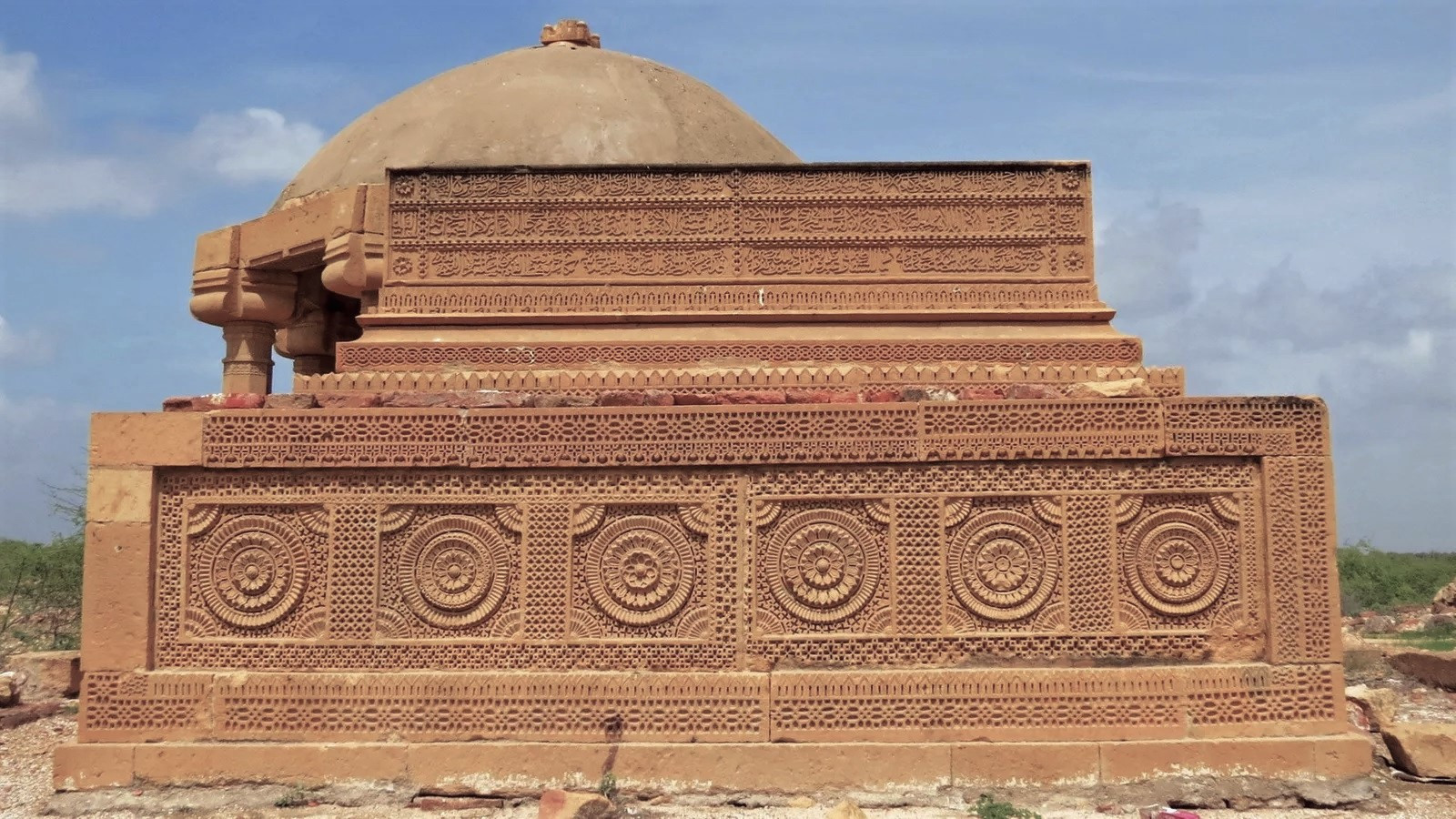 The photos shared by Edoardo Mapelli Mozzi on Instagram show architectural features of the acropolis are characterised by simple and Doric order columns of classical Greece having no decoration at the base and a simple capital at the top. Doric columns tapered so they were wider on the bottom than at the top.

But here at Makli, pillars are exuberantly decorative and perhaps belong to Corinthian order, an advanced Greek order following Doric and ionic orders. Later, this order was copied by Romans and rest of the world in different styles of adornments. While plans for protection and restoration are underway, the fact that the monuments have lasted this long is a testament to the quality craftsmanship of the architects of that time.

Lavishly decorated structures testify the artistry of the craftsmen who created the ornamental décor of the necropolis. The rosette has been used extensively. Intense scrutiny demonstrates designs of 4-18 or more fold petals, stars and leaves. Interestingly, free shapes are dictating almost all the stone canvas while geometric motifs and spiraling leafy themes inlaid in circles are typical arabesque that were borrowed from Persian and Mughal era. There is an exquisite display of delicate relief work accentuated by calligraphic carvings.