Genome sequencing of virus sample in progress, patient discharged and isolating at home

Pakistan has detected its first 'suspected' case of the Omicron variant in Karachi, said the provincial health minister on Thursday.

Sindh Health Minister Azra Fazal Pechuho said the authorities "suspect the case to be of the Omicron variant due to the virus' behaviour".

"The genome sequencing has not been done as of now, but we suspect it to be the Omicron variant due to the manner in which the virus is behaving".

She added that the suspected Omicron-affected patient is a 57-year old woman from the provincial capital.

"The Omicron variant spreads quickly, but recent reports from South Africa suggest that the variant does not cause serious illness or a high number of deaths."

She said the virus also spread because people were not vaccinated. “This woman was not vaccinated either. I am appealing to you to get the second dose and if you are fully vaccinated, get the booster dose. It can protect you.”

The minister's statement came hours after her spokesperson, Mehar Khursheed, confirmed the detection of the first Omicron case in a woman from Karachi. She said the infected woman was unvaccinated and had been admitted for treatment to Aga Khan University Hospital.

A spokesperson for the Aga Khan University Hospital confirmed the development and said they had "received the first patient suspected of having Covid-19 Omicron variant".

"We are awaiting the results of the final (genome sequencing) confirmatory test, which will take a few days and have reported the suspected patient to the health department."

He added that the patient has been discharged.

"Our current COVID-19 prevention and management protocols are adequate for the treatment of the virus."

Karachi (08-12-21): Minister for Health and Population Welfare, Sindh, Dr. @AzraPechuho's statement on the suspected case of Omicron. A genomic study is being conducted which will confirm the exact variant but for now getting both doses of the vaccine is the best precaution. pic.twitter.com/24wi7MwXlR 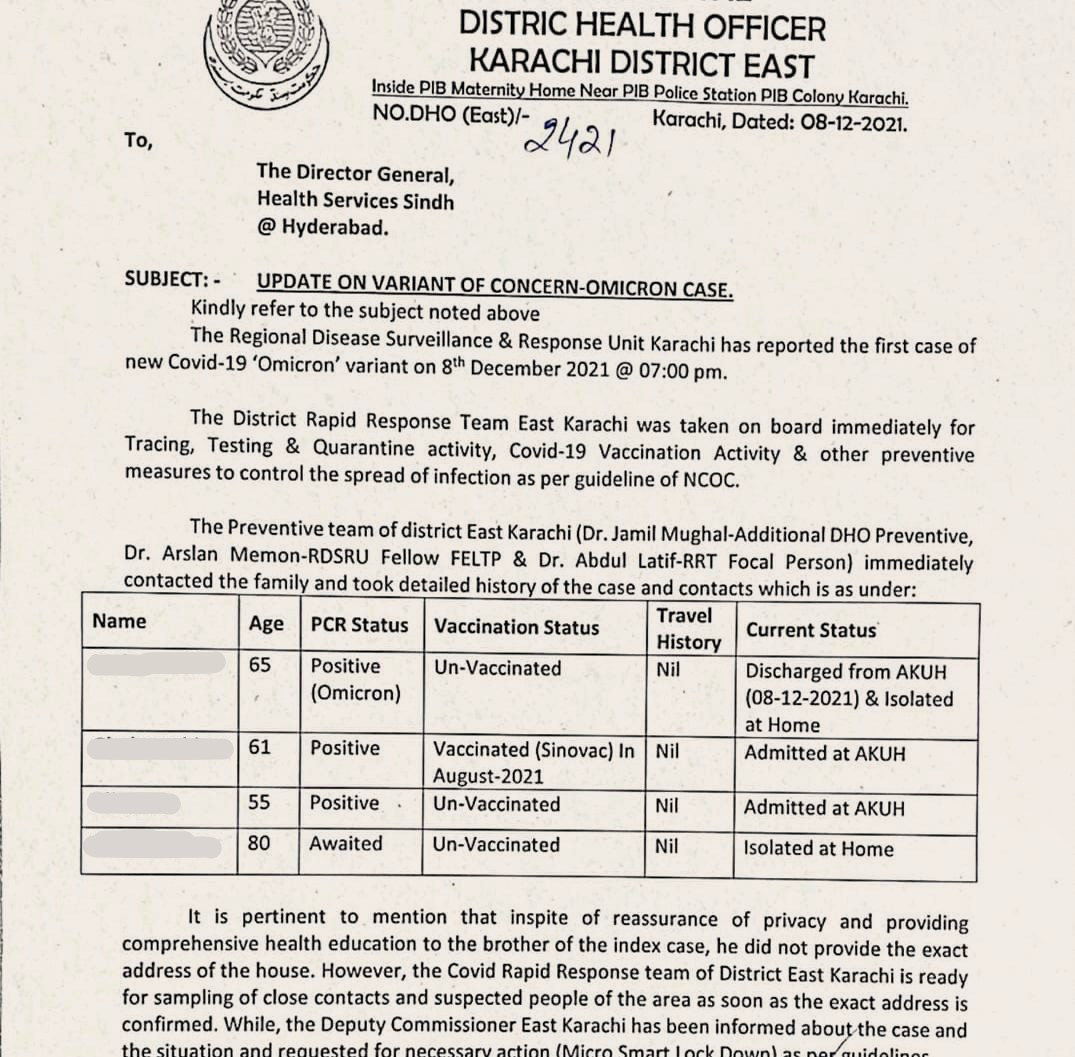 A spokesperson for the Aga Khan University Hospital confirmed the development and said they had "received the first patient suspected of having the Covid-19 Omicron variant".

"We are awaiting the results of the final [genome sequencing] confirmatory test, which will take a few days and have reported the suspected patient to the health department."

He added that the patient had been discharged.

"Our current Covid-19 prevention and management protocols are adequate for the treatment of the virus.”

The district health officer of Karachi's East district wrote a letter to the provincial director general of health that the Regional Disease Surveillance and Response Unit in the city had reported the first case of new Covid-19 'Omicron' variant on December 8, 2021, at 7pm.

The letter added that the woman, who was 65 years of age, was unvaccinated and did not have a travel history. She was discharged from the hospital on Wednesday and was isolating at home.

“The rapid response team was taken on board immediately for tracing, testing, quarantining, vaccination and other preventive measures to control the infection's spread as per the guidelines of the National Command and Operation Centre.”

The letter stated that the district's health team also immediately contacted the woman's family to take a detailed history and trace her contacts.

It added that the deputy commissioner of the district was also requested to take the necessary action and impose a micro smart lockdown.

The National Institute of Health (NIH) in Islamabad said the sample of the coronavirus patient was "not yet confirmed to be Omicron via whole-genome sequencing" which would be performed after the NIH received the sample.

With the latest expansion, the number of countries on Category C increased from seven to 15.