The health insurance, a subsidiary of Kamyab Pakistan Programme, will provide free medical services worth rupees up to one million annually to 7.5 million families in Khyber-Pakhtunkhwa.

Addressing the launching ceremony of the programme in Peshawar, Prime Minister Imran Khan announced that with the Punjab government spending Rs320 billion on a health insurance programme, the insurance facility will be available to every citizen of Punjab, Khyber-Pakhtunkhwa, Gilgit-Baltistan and Azad Jammu and Kashmir.

The PM said his party – Pakistan Tehreek-e-Insaf - had started its political journey with a goal to make Pakistan a “true” Islamic welfare state as envisioned by the country’s forefathers.

Read more: Pakistan and the vision of a welfare state

“When the PTI came into power in 2013 in K-P, welfare-oriented programmes like health insurance projects were prioritised to benefit the poor people and low-income strata,” he added.

“The development projects, reform initiatives and dedicated party leadership have resulted in the unprecedented two-third majority of PTI in the 2018 election in the province,” he said. Referring to a UNDP report, the prime minister said that a significant reduction of poverty was witnessed in K-P during 2013-18 owing to the PTI government’s “prudent policies.”

The prime minister said that 6.3 million scholarships with an allocation of Rs47 billion were being given to students on a merit basis, adding that data of the students and scholarships were being compiled by the Prime Minister’s Office so that no deserving student could be deprived of the facility.

He said the PTI-led government has been succeeded in improving governance, restoring the law and order situation and boosting the morale of the police force that was at the forefront in the war against terror in 2013 in K-P. Despite the coalition government during 2013-18 in K-P, he said that 30 per cent of health insurance has been provided to the people. 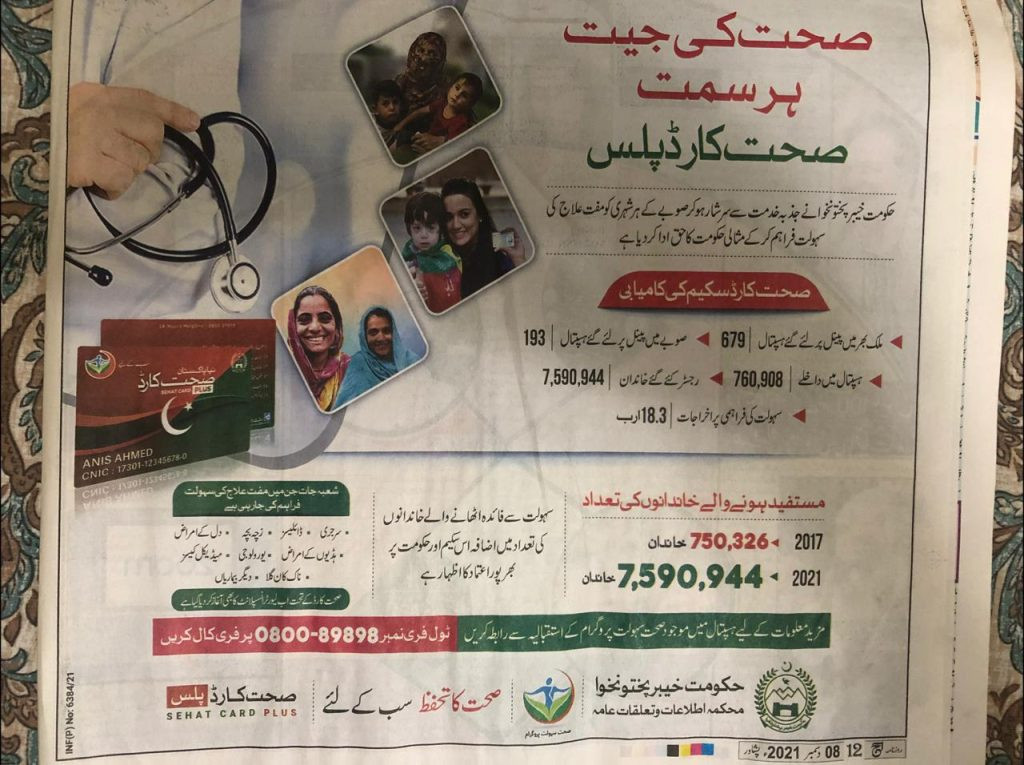 He also congratulated the K-P government for extending free health insurance to the 100 per cent population. Under the Kamyab Pakistan Programme, micro health insurance would provide free medical services worth Rs1 million annually to 7.5 million families in the province.

He added the health insurance programme would also be launched in Punjab from January 1 2022, and the entire population of the province would be covered in three months. The government of Balochistan, Azad Kashmir and Gilgit Baltistan also intended to launch such a mega programme.

“Free health insurance card was a great blessing for poor people and low-income groups,” he said, adding that universal free health coverage in K-P was unprecedented as such facilities “were not available” in the developed countries.

Appreciating the performance of the NCOC, the prime minister said the country had effectively tackled the coronavirus pandemic that created havoc in the world and severely affected the supply food chain in the world that causing inflation, price hikes and increased prices of petroleum, gas and food commodities in Pakistan.

He claimed that the anti-Covid policies of the government had saved people from hunger, starvation and many precious lives besides averting the downfall of the economy. PM Imran said the government had announced a historic Ehsas food subsidy package worth Rs120 billion that would benefit over 20 million households.

“The Ehsaas Ration Discount Program will provide groceries to about 20 million families by covering 130 million people and giving them 30 per cent discount on the purchase of essential food items,” he said, adding that about 53% of the country’s total population would be benefited. Families with less than Rs50,000 per month income are eligible for the Ehsas Ration discount programme.

The prime minister urged the elected representatives to visit their constituencies and informed people and owners of grocery stores about the benefits and procedures of the Ehas Ration Program’s registration.

He also said that another welfare programme was being launched to benefit about two million poor families, adding interest-free loans up to Rs500,000 to each family, technical education and Rs2.7 million for construction of a house to live a prosperous and dignified life.

Also read: The dream of welfare

The premier regretted that heavy loans borrowed by previous governments had overburdened the country’s economy and added the major chunk of revenue generated by the government was being spent to pay interests on those loans.

He said that 10 new dams would be constructed in the next 10 years to address the problem of water scarcity and bolster food production. He said there were about 80,000 dams including 5,000 big dams in China.

The dream of welfare