The silent drought in the making

Against a growing population and urbanisation, ground water reserves in Peshawar are rapidly depleting

“I found water at a depth of 65 ft when I started constructing a borewell at my house in 2008. Then a friend, who bought a house in my neighbourhood – also while digging a borewall - found it at a depth of 75 feet.”

“In 2021, another friend in the same neighbourhood, told me that the level has gone down as he found water a depth of 110 ft,” said Dr Inamullah, a teacher at Agronomy Department at the University of Agriculture Technology Peshawar (UATP).

Dr Inam lives in Islamia Town near the university, a relatively semi urban locality, not that developed with land surface to prevent recharge groundwater table.

“Imagine how precarious the situation is getting, and how deep we will dig if groundwater table continues to deplete at this speed,” he said while expressing his concerns.

Raising alarm bells over the continuous depletion of groundwater level, climate change and water experts in Khyber Pakhtunkhwa called for immediate action by the government in order to formulate comprehensive and clear legislation to stop the misuse of groundwater.

A silent crisis that is looming large over the capital of Khyber Pakhtunkhwa, Dr Inam urged the government to wake up and take step to divert it.

Groundwater, being used for drinking, domestic, industrial and even agricultural purpose in Peshawar city, is depleting at a fast pace due to its excessive extraction.

“Water found at 110 ft depth is unfit for drinking and locals are even unwilling to wash their faces with it,” he said. “The water in fact, is muddy and even smells so bad that some people don’t want to wash their floors with it.”

He says that Pakistan might be the only country where people wash cars with clean drinking water, sprinkle on roads and streets.

Dr Attaullah, who co-authored a publication, ‘The Impact of Built Environment’ published in 2019, mentioned that 800 million gallons per day is being extracted from 1400 tube-wells in the city.

He mentioned that the water level has dropped by 15 meters at different locations of the city. The publication claimed that around 20 per cent of tube wells have collapsed between 1981 and 2021.

“We are a concrete loving people. We cut trees, concretise land surface without taking environment and water in consideration,” he lamented.

A cloud on the horizon, as he said, while pointing out several reasons that has been causing groundwater depletion.

“The pace with which this crisis is unfolding is faster than the steps being taken to divert it,” said Agronomist Dr Muhammad Akmal, a professor at UATP.

The experts held urbanisation, non-implementation of laws and lack of awareness about the consequences of excessive mining of water as some of the major reasons that are leading the city towards a possible catastrophe. 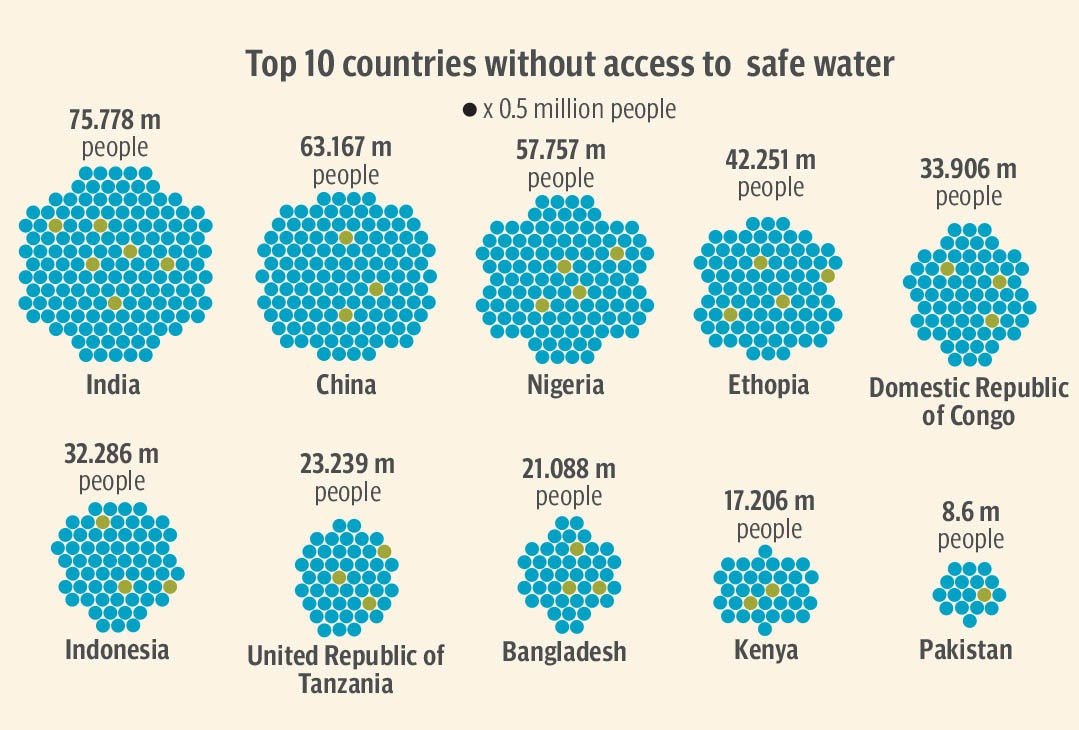 An apparent sea of concrete that continues to stretch in every direction, Peshawar city is not only losing agricultural land but also its groundwater sources.

Families from rural areas continue to migrate to the city in search of jobs, easy access to health and education facilities. Moreover, mass displacement due to militancy in the tribal peripheries have overburdened the city’s meagre resources.

It is expected that the population of the city reaches to 3.5 million by 2030 and the demand for water will increase to over 310 million liters per day, Dr Attaullah said. 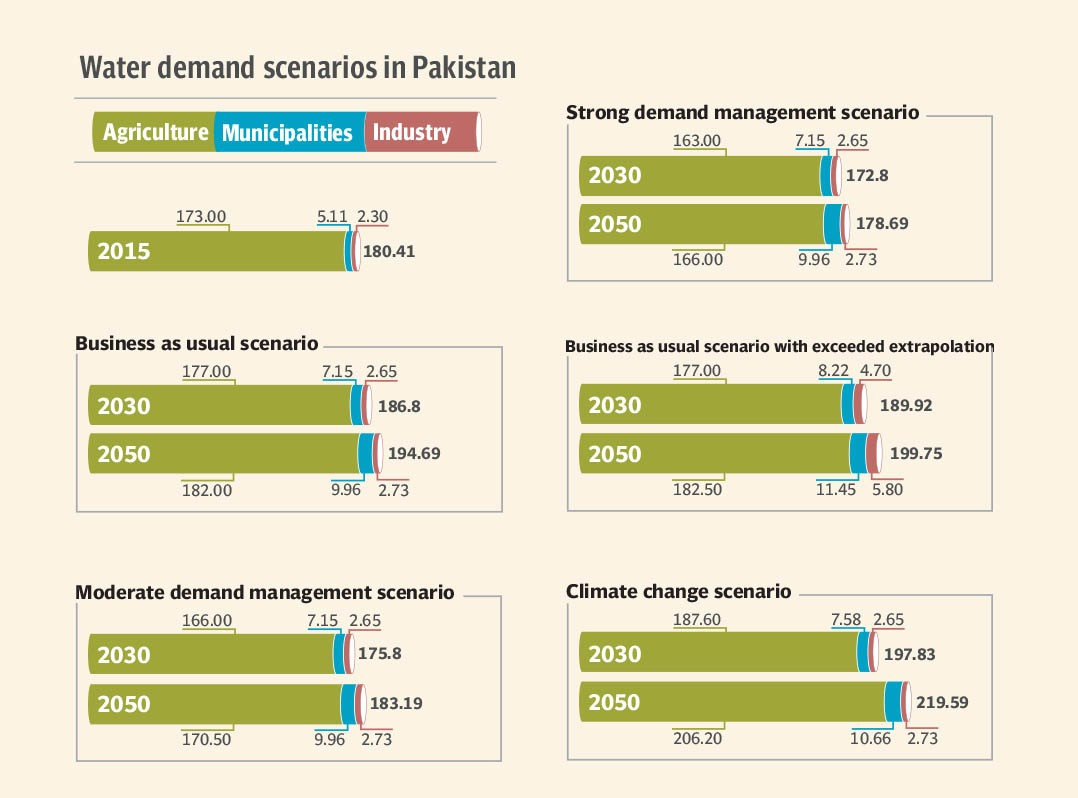 The irregular and rampant urbanisation is leading to the mushrooming growth of private housing societies throughout the city, a lucrative business.

According to Peshawar Development Authority (PDA), there are around 198 private housing societies (PHS) of which only 18 are approved, 18 unapproved and 162 have been declared illegal for not getting a No Objection Certificate. The number of PHS that have been completed is unknown. However, there are hundreds of PHS that have been completed with no data available with relevant departments.

These societies are eating away not only farmlands but also covering land surface, which leaves no space for rainwater to recharge the groundwater level.

Dr Attaur Rahman, chairman Geography Department University of Peshawar, in his research publication on loss of agricultural land titled, ‘Soil Sealing and Depletion of Ground Water in Rapidly Growing Peshawar City District,’ mentioned that built area has steadily increased from 4,635 hectares to 20,451 hectares between 1981 to 2014.

To cater to the water demand of city dwellers, there are four departments that are providing services: PDA, Public Health Engineering Department, Cantonment Board and Water and Sanitation Services Peshawar (WSSP). The latter supplies water to people in 43 urban union councils and has no law in place to impose fines, disconnect or shut down the illegal water connection.

These service providers have their own tube-wells. According to Dr Attaullah, there are 1,400 tube-wells in the city. WSSP owns 524 of the tube-wells that are supplying water to consumers in 43 urban union councils while four are under construction. Two of its tube-wells however, have collapsed. The company, however, has only 84,000 registered households.

PDA, which is offering services in Hayatabad Township and Regi Model Town, have two kinds of tube-wells – for supplying drinking water and for horticulture purposes. When contacted, Deputy Director Water Supply Sardar Hussain said that PDA has 90 tube-wells for drinking water, however, he expressed unawareness regarding number of horticulture tube-wells as well as of the total water discharge. He promised to provide the data, however, despite several attempts from this writer, the data was never received from him. 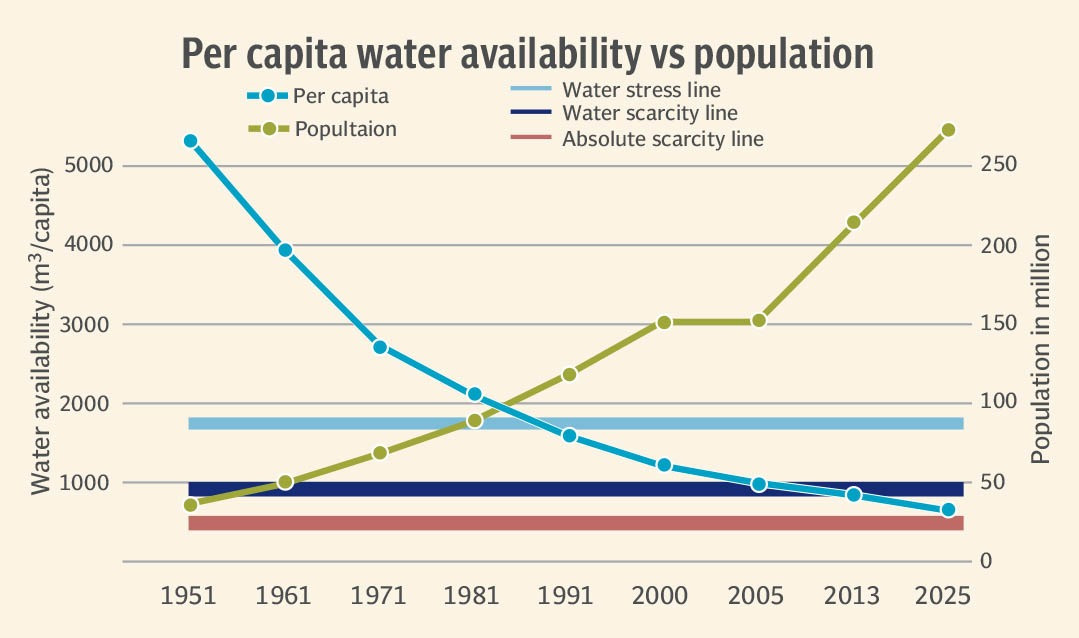 Besides, there are private tube-wells and thousands of borewells that are unregistered with no check on them, despite the fact that construction of a borewell without the prior permission of water service provider is illegal as per the Khyber Pakhtunkhwa Water Act 2020.

To conserve water sources, the Supreme Court in 2018 took a suo moto notice and asked provinces to make legislations on water conservation of water resources. The KP government passed the KP Water Act, 2020. The Khyber Pakhtunkhwa government in July 2020 passed the act that empowered the water services provider to install water measuring meters and a fine for tempering with them. Under the law, the government was supposed to establish a Water Resource Commission not later than six months of passage of the act.

The act says aquifers shall be allowed where it is not practicable for a water service provider to supply water in pipes. In this case, the service provide may allow a person, through special permission, to abstract water for domestic purpose only.

There are hundreds of commercial entities like plazas, wedding halls, hotels and car wash centres that have their own bore-wells.

There are hundreds of car wash centres who have dug bore-wells that are 150 to 200ft deep and extract water to wash vehicles. The WSSP claimed to have registered over 100 car wash centres in the city. Those registered have no flow metres installed to find out the total discharge per day. The exact number of such centres in localities under PDA and cantonment board could not be ascertained.

Moreover, there are hospitals, 16 public and private universities, colleges and schools, hundreds of mosques of which only 43 mosques are registered with Auqaf department that are mining groundwater.

These entities have constructed tube-wells and bore-wells and are pumping out water, and most of them are paying no charges. There are also no flow metres or devices installed to check how much water each entity is extracting and taking the consequences into account.

In an attempt to prevent wastage of water, WSSP in January 2020 decided to register all the commercial entities and install flow metres to check water discharge. The move invited resistance from traders and owners of markets and plazas, resisting registration and installation of flow metres.

The owners moved the Peshawar High Court against the decision, claiming that they constructed the bore-wells on their own expense and are paying power expenses for extracting the water.

The court has reserved a judgement in this regard, with remarks, as reported by several newspapers, that the sanitation company should first provide facilities then charge the petitioners for extraction of water. The judgement is awaited.

There are thousands of private borewells that are unregistered and extracting water without any check.

In the summer, WSSP announced to increase the water supply duration from eight hours to 10 hours a day from its 543 tube-wells. It said that the company was extracting 50.49 million gallons of water per day – the highest ratio in Pakistan – as it claimed.

Dr Gul Daraz Khan, Chairman Water Resources Management Department at the Agricultural University of Peshawar, admitted that aquifer is not recharging because of concretising land surface, drains and canals. The concrete land surface accelerate the rainwater run-off and this will have severe impacts in future.

He said everyone is extracting water but nobody cares and think how to recharge the table. “Drains, rainwater, canals and rivers recharge groundwater table but when you concretise land surface, leaving no space for it to permeate, it will definitely deplete,” he said.

Poor infrastructure is also causing massive loss of water. “According to an estimate, we lose 55 per cent of the extracted water due to leakage,” said Zonal Manager WSSP Engineer Turab Shah. However, no department has the exact data in hand to ascertain the exact volume of water discharge from the ground and lack strategy on how they would prevent its depletion.

“Groundwater belongs to Allah. Are you going to sell us what belong to Allah,” said Muhammad Ismail, manager Citizen Liaison Cell of WSSP.

Talking about masses’ perception regarding water conservation, he said masses shrug us off with a ridiculing laugh, when we appeal to them to save water. “No way, there is no end to gift of God, they say,” he said.

The federal government has launched various hydro-power projects including the construction of Mohmand and Jabba dams. On completion, the Mohmand dam will supply 300 million gallons of water per day to Peshawar, said project manager Mohmand Dam Mohammad Javid Afridi in a video uploaded on social media. However, experts claim that despite water supply from the new dams, the city would still face a shortage of one million gallons per day.

According to experts, a water crisis due to mismanagement and climate change seems to be in the cards for the entire country too. A 2016 UNDP Pakistan report titled, ‘Development Advocate Pakistan’ the National Climate Change Policy identified some threats in relationship with Pakistan’s vulnerability to climate change: erratic monsoon rains causing frequent and intense floods and droughts, projected recession of the Karakoram-Himalayan glaciers due to global warming and carbon soot deposits from trans-boundary pollution sources, threatening water inflows into the Indus River System, increased siltation of major dams caused by more frequent and intense floods, rising temperatures resulting in enhanced heat and water-stressed conditions, leading to reduced agricultural productivity, and increased intrusion of saline water in the Indus delta, adversely affecting coastal agricultural, mangroves and the breeding grounds of fish.

Moreover, the report states that only 20 per cent of the available water in the country is safe for drinking. Additionally, 16 million people in the country have no choice but to collect unsafe water from unsafe sources.