Removes its name from First Schedule of ATA, 1997 as proscribed organisation

The federal cabinet on Sunday revoked its earlier decision of declaring the Tehreek-e-Labbaik Pakistan (TLP) a “proscribed” organisation under the country’s anti-terrorism law after it committed that it would abide by the Constitution and the laws of the country – no more violent protests.

The cabinet approved the interior ministry’s summary after the Punjab government proposed that the “federal government may consider de-proscription of the TLP” in view of the “larger national interest and long-term perspective to ensure that such incidents do not recur in the future”.

Just six months after being outlawed, the TLP got a clean chit from the federal cabinet and its cases quashed as well as workers released from jails after reaching a secret agreement with the government.
The content of the agreement, which was reached after the Chief of Army Staff (COAS) played a key role, has yet to be made public as the facilitators of the talks had announced that it would be shared at an appropriate time.

“It is because of his [COAS] blessings that everything got done,” Saylani Welfare Trust Chairman Maulana Bashir Farooqi had revealed right after the announcement about the agreement. “Army chief has a 1,000 percent role in settling the issue,” he added.

Farooqi along with Maulana Mufti Muneeb and business tycoon Aqeel Karim Dhedhi had met the army chief and played a key role in the talks. From the government’s side, Foreign Minister Shah Mahmood Qureshi, National Assembly Speaker Asad Qaiser and Minister of State for Parliamentary Affairs Ali Muhammad Khan held talks with the TLP leadership.

The TLP, whom the cabinet had declared a banned outfit in April and recently decided to treat it as a militant organisation, is all set to return as “the third largest political party of Punjab”.
Even before the interior ministry’s notification announcing revocation of the TLP’s proscribed status, political parties hinted that they were ready for seat adjustments with the TLP in the future.

Late on Sunday night, the interior ministry announced its decision of restoring TLP’s previous status after the federal cabinet approved the summary seeking its de-proscription. “The cabinet considered the summary dated Nov 6, submitted by the Interior Division, which was circulated in terms of Rule 17 (1)(b) read with Rule 19 (1) of the Rules of Business, 1973 for ‘de-proscription of TLP’ and approved the proposal,” the decision by the federal cabinet read.

The TLP was proscribed by the federal cabinet on the recommendation of the Punjab Home Department via its letter of April 13. The interior ministry had outlawed the TLP on April 15 under Section 11-B (1) of the Anti-Terrorism Act of 1997. 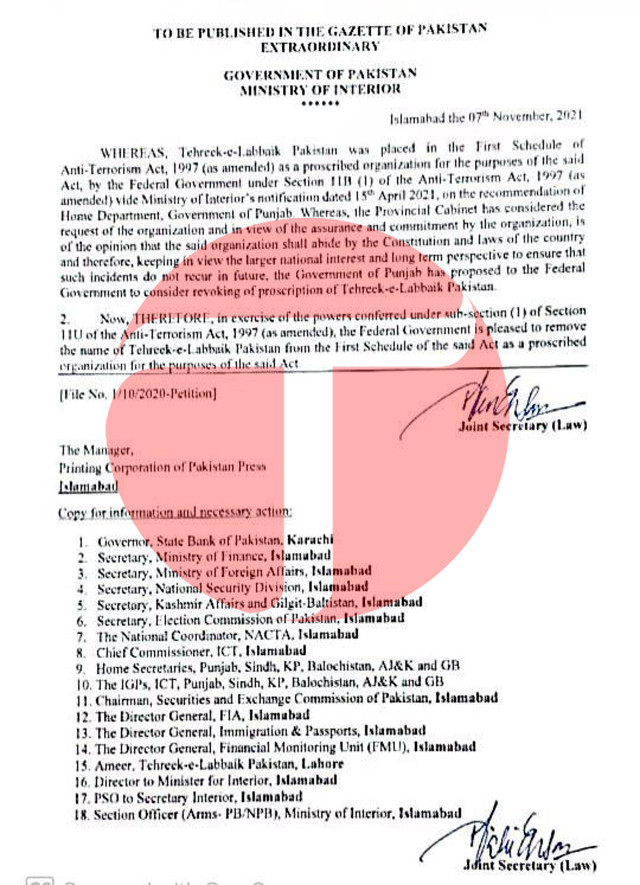 The federal government had said that it had “responsible grounds to believe that the TLP was engaged in terrorism, acted in a manner prejudicial to the peace and security of the country, involved in creating anarchy in the country by intimidating the public, and caused grievous harm, hurt and death to the personnel of law enforcement agencies and innocent by-standers”.

In its grounds for disbanding the party, the government had stated that the TLP “attacked civilians and officials, created wide-scale hurdles, threatened, abused and promoted hatred, vandalised and ransacked public and government properties including vehicles and caused arson, blocked essential health supplies to hospitals, and had used, threatened, coerced, intimidated, and overawed the government and public, creating a sense of fear and insecurity in the society and the public at large”.

The TLP frequently created unrest in the country; went on a rampage; had violent clashes with the LEAs leaving several policemen dead while hundreds of others injured. In their protests, the TLP workers and activists kept demanding the closure of the French embassy and expulsion of its ambassador after the publication of blasphemous sketches of Holy Prophet (PBUH) in France.

In between these two notifications, the TLP had frequently protested; blocked thoroughfares of the country; and threatened to march on Islamabad if their demands were not met. At one point amid anti-French protests, France had urged its citizens to leave Pakistan.

Repeatedly, the government had vowed that no one would be allowed to challenge the writ of the state; cross the red line, denouncing its “misuse of religion” and putting a ban on its coverage. However, almost exactly the opposite has happened and the TLP got a clean slate despite being accused of crossing the defined limits time and again.

Dhedhi, who was named as one of the guarantors of the deal with the TLP, had recently answered the question about the killings of policemen when he said that “we have to forget about these eight-10 killings and move on” – perhaps, that’s what the state did. 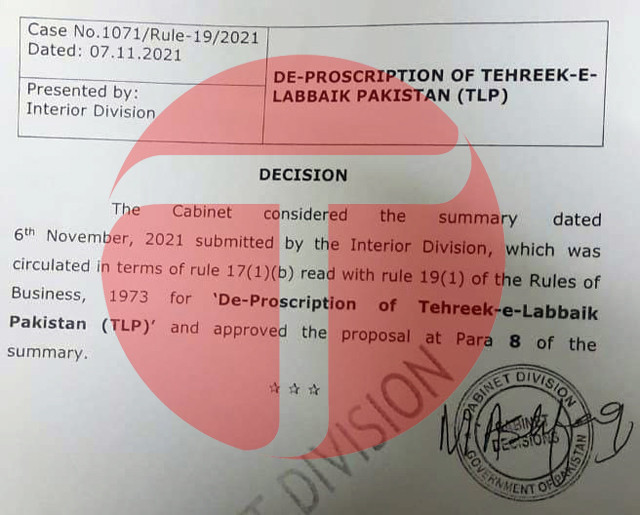 Taimur Jhagra says his efforts to Dar going in vain

Man booked for protesting against PPSC

Govt trying to make good use of idle properties in US

Iran's Raisi vows to pursue crackdown on protesters after execution