The fort was constructed at an altitude of 15,000 feet by Hindu king Inder Pal. photos: express
RAWALPINDI:

The over 1,000 century-old Nandana Fort still bears its original might and magnificence despite its obviously dilapidated condition.

Three months ago, the archaeology department discovered its foundations – a vital first step for its restoration.

The building was constructed at an altitude of 15,000 feet by wealthy Hindu king Inder Pal and completed within a period of three years.

It is located in the Baghanwala village of Pindadan Khan Tehsil in the Jhelum district on a 300-kilometre salt range – bearing architectural similarities to the Katas Raj Temple, and housing a shrine built by the Hindu Shahi King Jayapal.

The fort was ruled by the Shahi kings until the early 11th century when Mahmud of Ghazni expelled them from the area.

The building also served as a study centre, and while there were other structures that occupied the same role, only the fort remained when Mahmud of Ghazni took over.

The landmark fort housed the laboratory of renowned Muslim Persian scientist Abu Rayhan Al Biruni, where he measured the circumference of the earth. Understandably, the building is also known as the Al Beruni Centre for this reason.

The building has been a safe haven for Mughal emperors Jalaluddin Akbar and Jahangir, and they hey often visited Nandana Fort to hunt deer and birds. 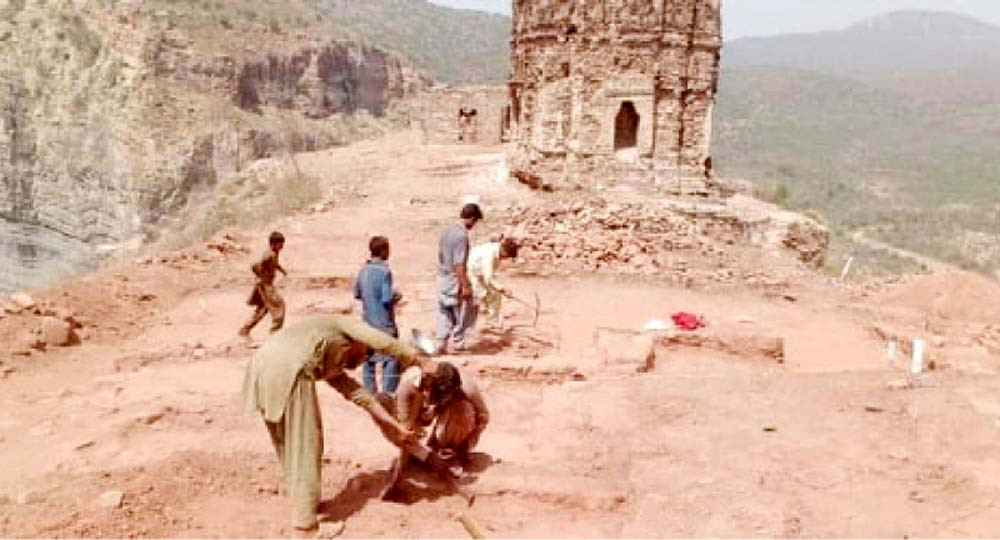 Located within the salt range, the foundations of the fort were severely damaged and in dire need of restoration.

Punjab Chief Minister’s Adviser on Tourism Asif Mehmood said that Prime Minister Imran Khan visited the area and a rehabilitation project had been prepared accordingly. The restoration project would be completed by June 30 next year.

He said that as part of the plan, the Al Beruni laboratory was being set up, where young scientists and students would be able to perform experiments.

He revealed that the recent excavations by the archaeological department would be helpful in determining the accurate age of the building and that valuable pottery and antiquities had also been recovered from the premises.

Under the project, the Baghanwala village had been given the status of model village and would get a telephone line, water, electricity, gas, and internet service.

Mehmood said that double-way signal-free roads would be constructed from GT Road to the village at three points. The first point would be made at Baghanwala Ground where tourists could stay and it would also contain a large parking space and rest houses.

He said that the second stop would be at the midpoint, where stalls would be set up, along with washrooms and temporary accommodation. The third and final point would be at Nandana Fort, where extensive parking, hotels, and rest houses would be constructed, he said.