The ‘F’ factor in Urdu literature

Dr Nuzhat Abbasi is one of Pakistan’s best-known contemporary women poet, who also has a most natural prowess and elegance with which she brings verse to life. A poet as well as a social curator and critic, she also explores feminism and relishes the contradictions and complexities around her in her verses. Whatever she has penned is a result of the urge from within herself to write on that subject. Dr Abbasi heads the department of Urdu literature at a private university. With four published books, alongside contributions to various magazines and other publications, this progressive poet is an important presence on the map of Pakistani poetry in Urdu. She is associated with good number of literary guilds and the president of Dabistan e-Ghazal. She also has participated in International Urdu conferences and Mushairas. A frequent face in literary activities, Dr Abbasi received Parveen Shakir Aks-e-Khushboo award for her book of poem ‘Waqt ki Dastak’. She is widely acclaimed for her sharp and incisive poetic expression, for having a feminist view, and for celebrating women’s voice and attitude in the universal human struggle for equality, justice, and freedom. Dr Abbasi is a poet who has carved a niche of her own. She has achieved a place in Urdu literature, where she is the supremo of soft feminine diction, melting voice and a tone that many would long for. When it comes to analysing literary works of Dr Abbasi, it turned out to be more prolific than most of her contemporaries. She has authored two collections of poems, a book of literary criticism and research titled Nuskhaha-i-Fikr. Prior to publishing these books she had published her PhD thesis ‘Urdu ke Afsanvi Adab me Nisai Lubo Lehja’ (feminine tone and accent in Urdu fiction writing). Her book explores the history of feminism in Urdu fiction writing.

Early female writers in Urdu did not write by their own names and went by suffixes like ‘daughter of’, ‘wife of’ or ‘mother of’, hiding behind a man's identity, living as his shadow like Zahida Khatoon Shervania who penned as ZKS with a hidden identity. But the scenario changed with time and women rejected this kind of identity that was dependent on a man. They came forward and started writing with their real names. The very first hint of feminism that we see in Urdu literature is when women gave up their titles of ‘Mrs’ and ‘Daughter of’ and the like and made their own identity in the world of literature back in the early 1900s. In an interview with The Express Tribune, Dr Abbasi defines grey lines of oppression and inequality in society while mapping the perceptivity of feminism—the ‘F’ factor in Urdu literature.

STF: How would you define feminism and its presence in Urdu literature?

NA: The concept of feminism is clearly defined as a movement for women’s socio-economic and political rights. It is a philosophy of life and way of thinking. Feminism is also a practical activism. This concept took a sharp rise during 20th century in both East and the West. It is a school of thought and its influence can be seen on every walk of life and every field of life. It is evident in arts, sociology, politics, and literature too. We have been watching wide ranging gender discrimination from centuries on. The basic theme of feminism is to eliminate gender discrimination and achieving equal status for women. One should not consider it as a movement against men.

STF: Did really female writers and poets play a role in shaping up the ‘F’ factor in Urdu literature?

NA: Of course, they play a leading role in constructing feminism in Urdu literature. In fact, they inspired the present generation too. Feminism and literature co-exist from the very first day the movement was born. It was an awakening being recorded in words by female creators of words. No doubt that the forerunners of this women’s movement were female writers. It is the reason that we can clearly see the influence of feminist school of thought and the feminist value in literature and prominence of woman like Virginia Woolf. Like literature in other parts of the globe, we can find the influence of feminism in Urdu literature too and not anyway it is borrowed from the West. In an undivided, greater Indian subcontinent women were largely involved in science and fine arts even thousands years ago during Vedic period.

STF: How this ‘F’ factor has been influencing Urdu poetry? 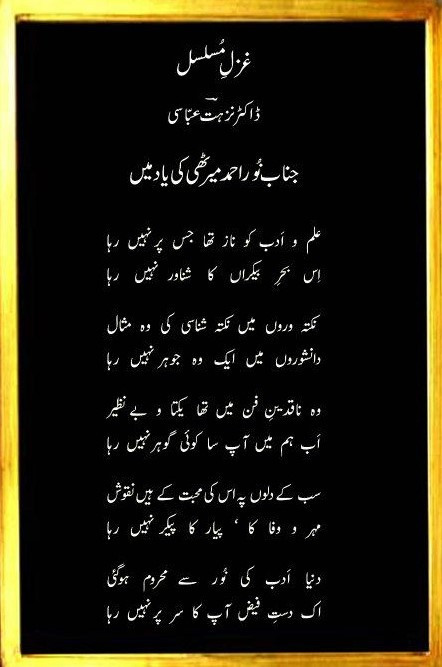 NA: In Urdu literature women have been contributing their feminist skill and sensitivity to poetry, fiction, novel, drama, humor, travelogue, analytic and other creative writings. With the movement spreading its wings, women found poetry as a ready podium to express their thoughts, voice their concerns and to claim their biological rights. If we talk about influence of feminism in Urdu poetry, we have a list of women poetesses who not only collected their inner emotions and feelings to paint their thoughts and to highlight the issues that they confronted. At least they were being heard and read. Their protests were being lodged against discrimination and their messages were being conveyed to the curators of segregated society. These poetesses created masterpiece of literature. We have an array of names of female poetesses who received stunning success in their creative pursuit starting from Mah Laqa bai Chanda, Zaibunnisa Makhfi, Zahida Khatoon Shervania ZKS and Lutfunnisa Imtiaz to Ada Jaffery, Kishwar Nahid, Perveen Shakir, Fahmida Riaz and Shahida Hassan.

STF: How will you evaluate the power of feminist consciousness in contemporary Urdu poetry?

NA: There is a new approach developed in Urdu feminist writing. The contemporary Urdu poetesses are creating feminist literature that is based on their personal and collective issues. They have evolved a unique poetic tone. These poetesses created fine technique of symmetry, diction, style, and phraseology. They are creating rich written words, in some cases better than their predecessors as modern writers and poetesses enjoy many facilities and resources that their predecessors really did not have. They have thus been able to reach a large audience of women and articulate an explicitly feminist narrative so powerful that compel us to revisit the spirit of contemporary feminist poetry again and again.

STF: How feminism has become a popular movement or school-of-thought among modern writers?

NA: Women’s participation and joining in Urdu literature has smartened the statement of language. The feminine notes and tones are very rich in terms of usage of words, presentation, and style. Their works are powerful enough to hold a larger audience. There was a time when women were not allowed to talk, participate in discussion and writing their thoughts. It was considered as taboo. But women creators were powerhouse of skill and used superfine word arrangement with layers of their thought. Their spirit and skills have been transpired to the poets and writers of new age.

STF: Do you think Urdu literature is becoming richer by women’s writings? 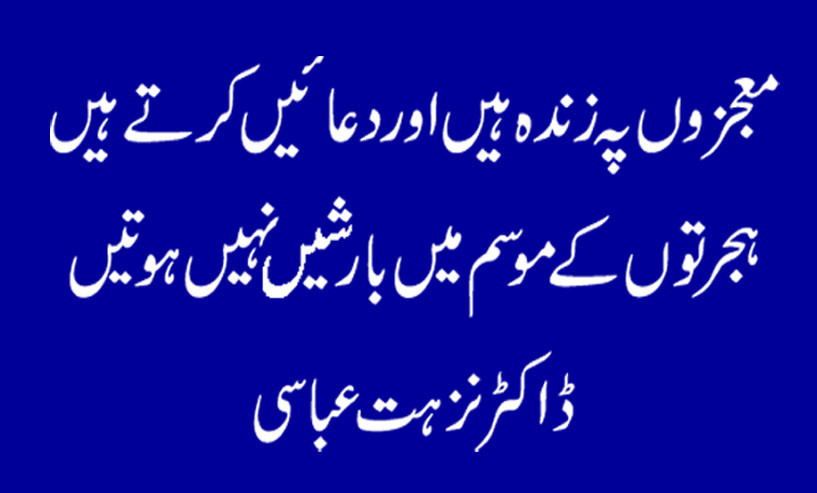 NA: In all over the world, women have contributed a unique thought, voice, tone and mood to the field of literature. Women have expressed their thoughts and imaginary that has enriched the literature. Let us talk about Pakistan. Here too women writers/poets are fully aware of the issues in the society. They are raising socio-economic issues. They are a bold voice of equality and rights for women. During the last century women of Urdu literature became more significant and creative. Today’s women are educated and empowered too. They have creativity of highest order and not less than men in any way, if compared. Urdu literature is no exception. There is a dire need to do research of feminism in Urdu literature to understand its importance and worth, not to segregate it by labeling as womanly literature. The aim of feminism in Urdu literature is to express women’s own thoughts in own way, own style, language and inborn creativity and to display their approach towards life. Women writers/poets are creating characters that they see around them. They weave in words what they experience as women and animate those in words. Definitely, they have a role in enriching Urdu literature.

NA: With feminist literature there emerged the concept of Gynocriticism to construct a female framework for the analysis of women's literature. Women creators have comprehensively contributed to fiction too. They have produced extremely valuable contents while experimenting with their very precise identity and being. Feminist elements in Urdu fiction writing can be traced in Urdu short stories starting with Nazar Sajjad Haider and followed by Mumtaz Shireen, Rasheed Jahan, Ismat Chugtai, Quratulain Haider. Other important fiction writers include Quratulain Haider, Khalida Husain, Fatima Hassan, Gillani Bano, Bano Qudsia, Zahida Hina, Jameela Hashmi and Azra Abbas and many more. They have enriched Urdu literature with their writings.

STF: Whom you would like to credit for introducing feminist element to Urdu literature?

NA: My research topic was feminist voice and tone in fiction writing and the thesis was published in 2013. It is a deep topic. In my opinion feminist element is noticeable in all category of Urdu literature including myth or dastan, fiction, poetry, and novel. In the early 20th century there was a significant development in writing of novel and fiction in Urdu literature. Women writers had started producing novel and fiction equally with men. They used their inner strength and talent. They used their own thoughts and diction, poured down all their feminine sensitivity and emotion on the flowing words that were impossible for men authors. Prominent among those women writers were Rashidatunnisa, Mohammadi Begum, Nazar Sajjad Haider, Khursheed Jahan, Momtaza Shireen, Asnat Chugtai, Qurratul Ain Haider and Jhadija Mastur. Jameeka Hashmi,Hajra Masrurm Jilani Banu, Banu Qudsia and of course how can I forget Nurul Hooda Shah.