Aryan, seven others on 14-day judicial custody in connection with alleged seizure of banned drugs from a cruise ship

An Indian court on Thursday sent Aryan Khan, the son of Bollywood actor Shah Rukh Khan, and seven others on 14-day judicial custody in connection with the alleged seizure of banned drugs from a cruise ship off the Mumbai coast, reported The Indian Express. Their bail applications will be heard on Friday, the court said. The NCB had sought an extension of their NCB custody, but the request was not granted.

“No doubt it is the right of the NCB to claim custody for investigation of an offence. But simply remanding the accused to police custody would amount to a violation of fundamental rights guaranteed by the Constitution,” the court said.

The NCB said it also wanted to confront the eight, including, besides Aryan, Arbaaz Merchant, Munmum Dhamecha, Vikrant Chhokar, Mohak Jaswal, Ishmeet Singh Chadha, Gomit Chopra and Nupur Satija, with a foreign national, who was intercepted allegedly with “commercial” quantities.

The court, however, said that the remand report and submissions made by the NCB were “vague”. “So far as the other accused are concerned, the investigation is silent. The remand report nowhere discloses sufficient grounds to extend custody. If the previous period of police custody is considered, sufficient opportunity and time were granted to the investigating officer for interrogation of these accused.”

Soon after the news of Aryan's detainment and arrest made headlines, many extended support to the youngster and SRK and wife Gauri Khan. Recently, Raveena Tandon took to Twitter and shared a tweet as well. Without naming names, she spoke out in Aryan's defence. “Shameful politics being played out. It’s a young man's life and future they toying with. Heartbreaking," the yesteryear's actor penned.

Shameful politics being played out.. it’s a young mans life and future they toying with … heartbreaking .

However, actor Kangana Ranaut shared how this case should serve as an eye-opener for the starkid. “Now all coming to Aryan Khan’s defense. We make mistakes but we mustn’t glorify them. I trust this will give him perspective and also make him realise the consequences of his actions." She added, "Hopefully, it can evolve him and make him better and bigger. It’s good not to gossip about someone when they vulnerable but it’s criminal to make them feel that they did no wrong.” 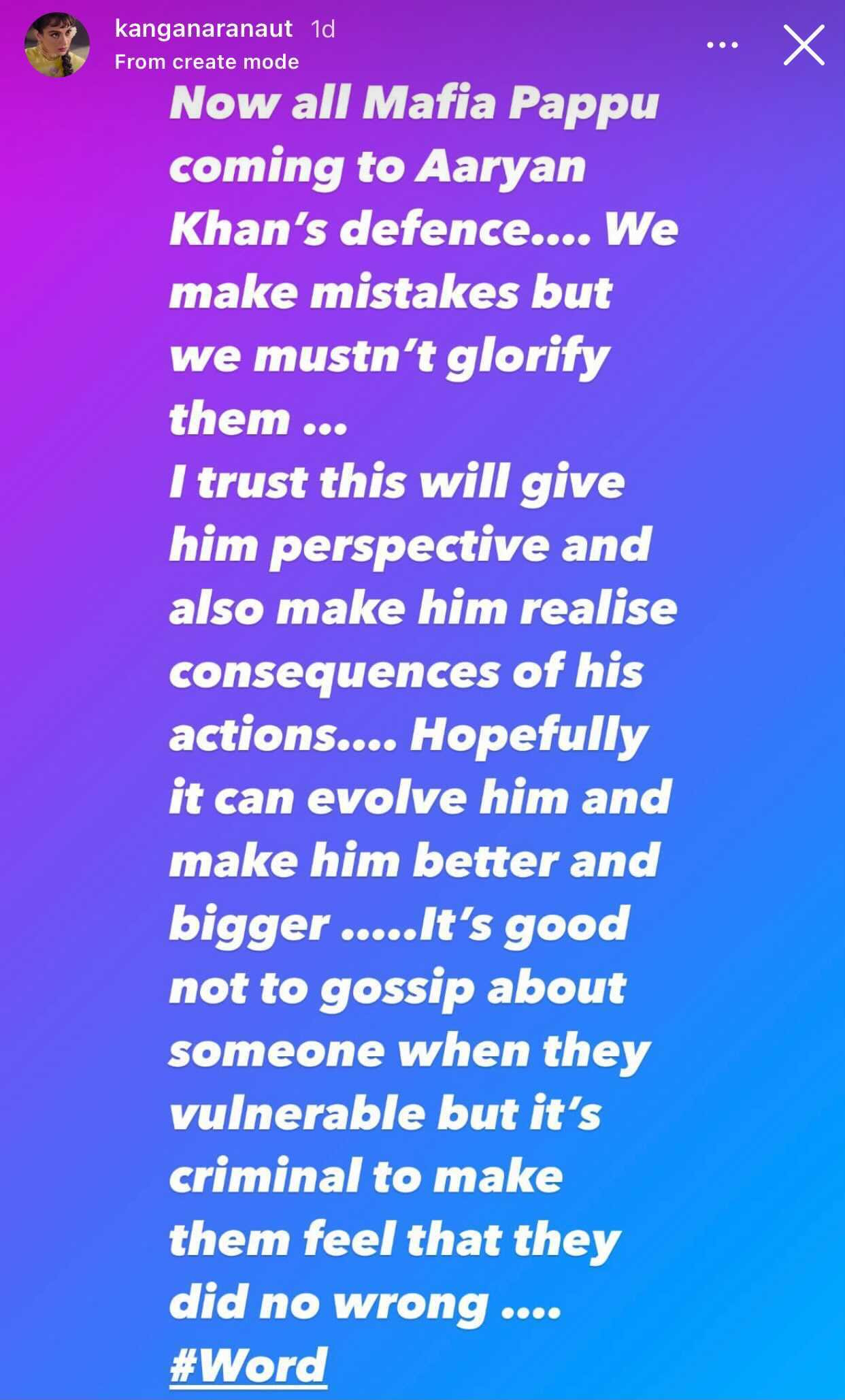 Her response comes after Bollywood hunk Hrithik Roshan penned a note for Aryan. Earlier on Thursday, the Kaabil star wrote a note of support for SRK's son on Instagram. He wrote, “My dear Aryan, Life is a strange ride. It’s great because it’s uncertain. It’s great cause it throws you curveballs, but God is kind. He gives only the toughest ones the toughest balls to play. You know you are chosen when amidst the chaos you can feel the pressure to hold your own. And I know you must feel it now. The anger, the confusion, the helplessness. Aaah, the very ingredients that are needed to burn the hero out from inside you. But be wary, those same ingredients could burn away the good stuff, the kindness, the compassion, the love.”

Aryan, Munmun Dhamecha and Arbaaz Merchant were arrested by the NCB on October 3 following a raid on a Goa-bound ship, while the other five were arrested the next day. They were produced before Additional Chief Metropolitan Magistrate RM Nerlikar at the end of their remand. The court sent them in judicial custody even as the probe agency sought an extension of remand till October 11.