Defined as the gravest crime against humanity, genocide has claimed more lives in the twentieth and twenty-first centuries than any war or conflict. Experts believe it occurs when warning signs are ignored and preventive action is delayed.

Despite similar lessons, patterns, and commonalities among the perpetrators and victims, these serious crimes against humanity, experts believe will continue to occur due to the selective approach to prevent them.

The Express Tribune examined data from the most recent examples of genocide in Burundi, Rwanda, Bosnia, and the ongoing atrocities in Indian occupied Kashmir (IoK). The information shows that despite all the warning signs, the cries of the Kashmiri people appear to be falling on deaf ears. 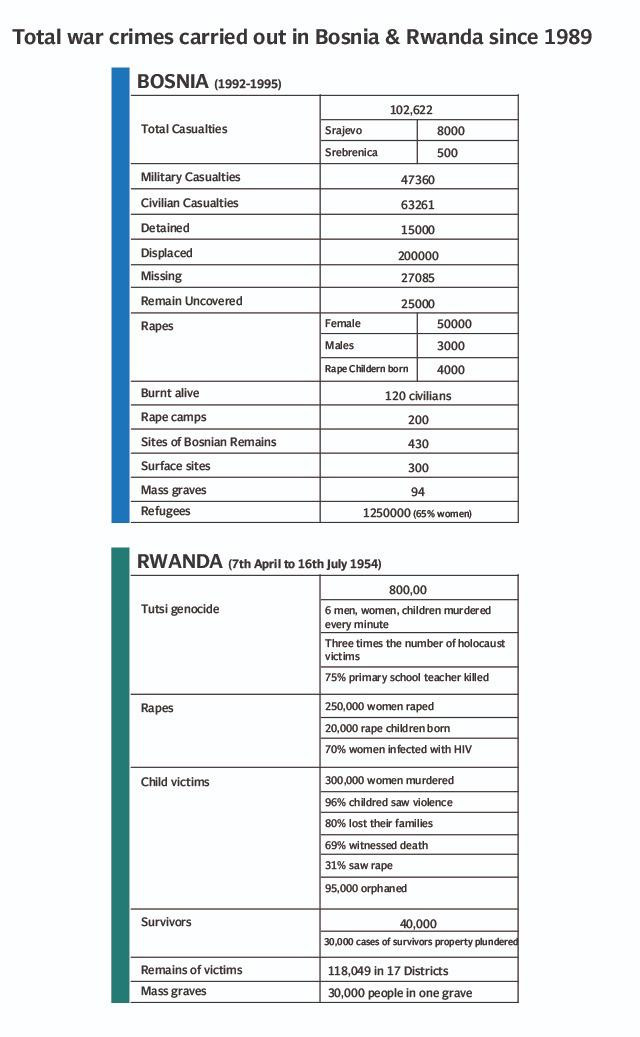 In the space of a little more than three months, 800,000 defenseless men, women and children perished in Rwanda, in what's been described by rights experts as the most efficient genocides in history.

“The intensity of the situation and the fact that it boiled so quickly, gripped the attention of the global community,” explained Dr. Hussain Nadim, Executive Director of Islamabad Policy Research Institute (IPRI).

Since Rwanda, the world has experienced at least five similar events of mass killings. Based on the trends and patterns from these events, it seems that the Indian occupied Kashmir appears to be inching closer to becoming the perfect textbook example of an ongoing genocide. 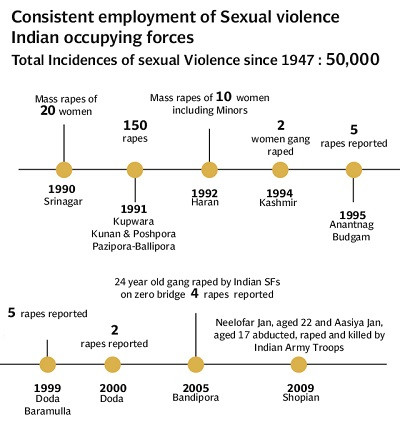 Despite the appalling figures from the occupied valley, it appears the global community is unwilling to prevent what Medecins Sans Frontieres’s, Alain Destexhe, once described as the gravest and greatest of the crimes against humanity in his book Rwanda and Genocide in the 20th Century.

Those responsible for the genocide in Rwanda and Bosnia had to face International Tribunals and serious charges related to war crimes. However, despite tell-tale signs of a genocide in Kashmir that is being carried out by the Indian forces, the UN itself appears to be helpless.

“I really find it troubling. This deafening silence over atrocities that have taken place in Indian occupied Kashmir, is criminal. Children have been injured, women have lost their honor, and young people are being randomly killed on suspicion of belonging to the freedom movement. But the world is probably waiting for the situation to deteriorate further before they think about any preventive measures,” said Dr. Talat Wizarat, a noted scholar and former chairperson of the department of International Relations at the University of Karachi.

Over the past seven decades, 11 UN resolutions have been passed on the Indian Occupied Kashmir. Whereas Bosnia was rescued after seven UN resolutions and Rwanda after five. In both cases, the world reacted and preventive measures were taken. Lamenting the global body for its indifference, Dr. Wizarat said: “The UN is an obsolete body and will end up as the League of Nations.” 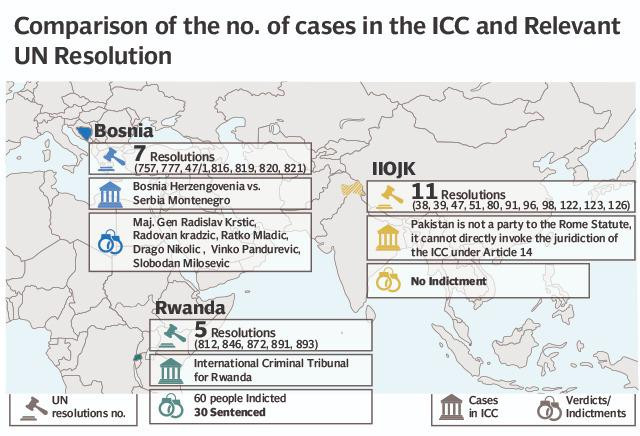 When asked to comment on why the Western world appears to be silent or chooses not to criticise India, Dr. Wizarat said: “The world is following the policy of appeasement. It failed in Europe and it will fail in this case too. Their commercial, economic, and strategic interests have blinded them and clearly it shows that they are willing to excuse India for all the human rights violations because of that.”

Not only was the UN very active in calling out the perpetrators in Bosnia and Rwanda, the International Criminal Court (ICC), that has the authority to investigates and, where warranted, prosecute individuals charged with the gravest crimes of concern to the global community: genocide, war crimes, crimes against humanity and the crime of aggression, was very active in handing down indictments. In Bosnia’s case The Hague-based court handed six indictments. Similarly, 60 people were indicted and 30 were sentenced in Rwanda’s case. While Kashmir has been on a low burner for more than 75 years, there hasn't been a single case or indictment.

This deafening silence over atrocities that have taken place in Indian occupied Kashmir, is criminal
Dr. Talat Wizarat,former chairperson of the department of International Relations at the University of Karachi

“If they have to embarrass a competitor or a rival, they blow the human rights issue out of proportion, but when it comes to their interest, as they evidently have in India, they conveniently turn a blind eye as if nothing is happening,” said Dr. Wizarat during a no-hold-barred interview.

The systematic coverup, she said, continues despite warnings from international human rights groups, including Amnesty International, the UN, and the Genocide Watch. In one way or the other all have raised the red flag and cautioned about the seriousness of the situation in the occupied valley. 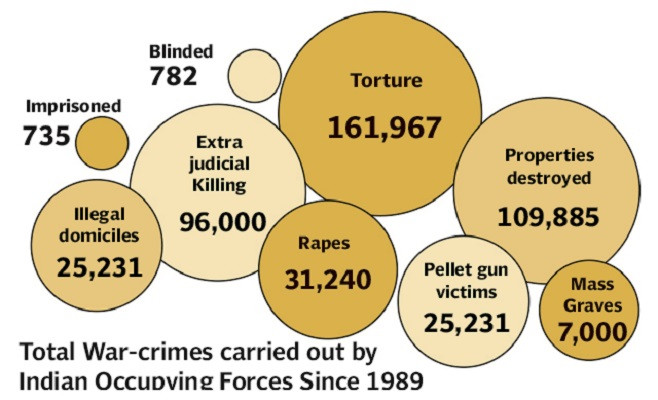 At the Islamabad-based think-tank, Dr. Nadim had similar views about the situation. Human rights, he said, are secondary to the business and economic interests of Western powers.

Back when New Delhi had a strong alliance with the Soviet Union, the Western powers, Dr. Nadim said, were more vocal about the Kashmir issue. “During the 90’s,particularly after the collapse of the Soviet Union, the international community decided that it was in their best interest to align with India to tackle the Chinese influence in the region. Since then, their interests supersede concerns for human rights in this area.”

According to Amnesty International, the Indian government’s decision to revoke the special status of occupied Kashmir has inflamed tensions in the area and that has increased the risk of further human rights violations. For its undiluted warnings about the atrocities and violations in the valley, including the longest blockade of the internet, the london-based rights group was forced to halt its operations in India.

The truth, according to multiple UN resolutions, however, is that Kashmir is a multilateral issue
CJ Werleman, Global Correspondent for Byline Times

But before leaving, Amnesty exposed the Narendra Modi government over a number of issues, including the heavy presence of Indian forces in the valley and their use of force against unarmed civilians. In total, 225 senior military operators are present in the occupied territory that are directly responsible for preserving the New Delhi administration’s tight control of Kashmir.

Why is the world numb?

According to CJ Werleman, a US-based journalist and global correspondent for Byline Times, India, through its media campaigns has made the Kashmiri resistance against the occupation and colonial rule indistinguishable from violent jihadism and terrorism in the minds of Western audiences.

“This has created the diplomatic space for New Delhi to argue that its brutal occupation management strategies used against 8 million Muslims in Kashmir, is in no way different to those deployed by the United States, United Kingdom, and European Union in their respective counterterrorism efforts against al Qaeda and ISIS,” explained the host of the popular CJ Werleman show.

India, Werleman said, has also successfully lobbied Western governments and audiences into believing the dispute over Jammu and Kashmir is a bilateral issue between New Delhi and Islamabad, which, in turn, has made the international community a disinterested observer. “The truth, according to multiple UN resolutions, however, is that Kashmir is a multilateral issue, one in which the UN is responsible for arbitrating or facilitating its long-promised referendum,” said Werleman by email.

What can be done?

Observers in Pakistan believe that India’s misinformation campaign needs to be countered more effectively. “India delivers its misinformation more confidently than we deliver our truth,” said IPRI’s Dr. Nadim. Pakistan, the Islamabad-based policy expert said, needs to be more aggressive and confident with exposing India on the global stage. He credited the National Security Adviser and the foreign ministry for being more proactive now.

Referring to the recent Indian media faux pas, Dr. Wizarat too said, Pakistan needs to be more aggressive when it comes to showing India’s true face to the world. “The self-proclaimed largest democracy in the world appears to be spinning a high volume of misinformation, which is a known threat to democracy and democratic values,” said Dr. Wizarat. “Pakistan has to counter India’s lies -- particularly related to Kashmir -- on every platform,” the Karachi-based foreign policy expert concluded.