Cashing in on the NFT craze

Behind on the cryptocurrency curve, Pakistan has taken lead in embracing its newer, more complex ‘cousin’

While Pakistan is yet to fully adopt the concept of cryptocurrencies, the country has taken a lead in understanding and embracing a relatively newer and more complex phenomenon of non-fungible tokens (NFTs). Lately, many entrepreneurs have established businesses that are involved in trading of NFTs while many others are planning to open up ‘digital antique shops’.

Recently, the infamous ‘Friendship Ended With Mudasir’ meme by a Pakistani creator was sold for 20 Ethereum tokens — equivalent to $51,776. The Express Tribune reached out to the firm that facilitated the sale of this meme for insights into the NFT ecosystem of Pakistan.

Not the first one 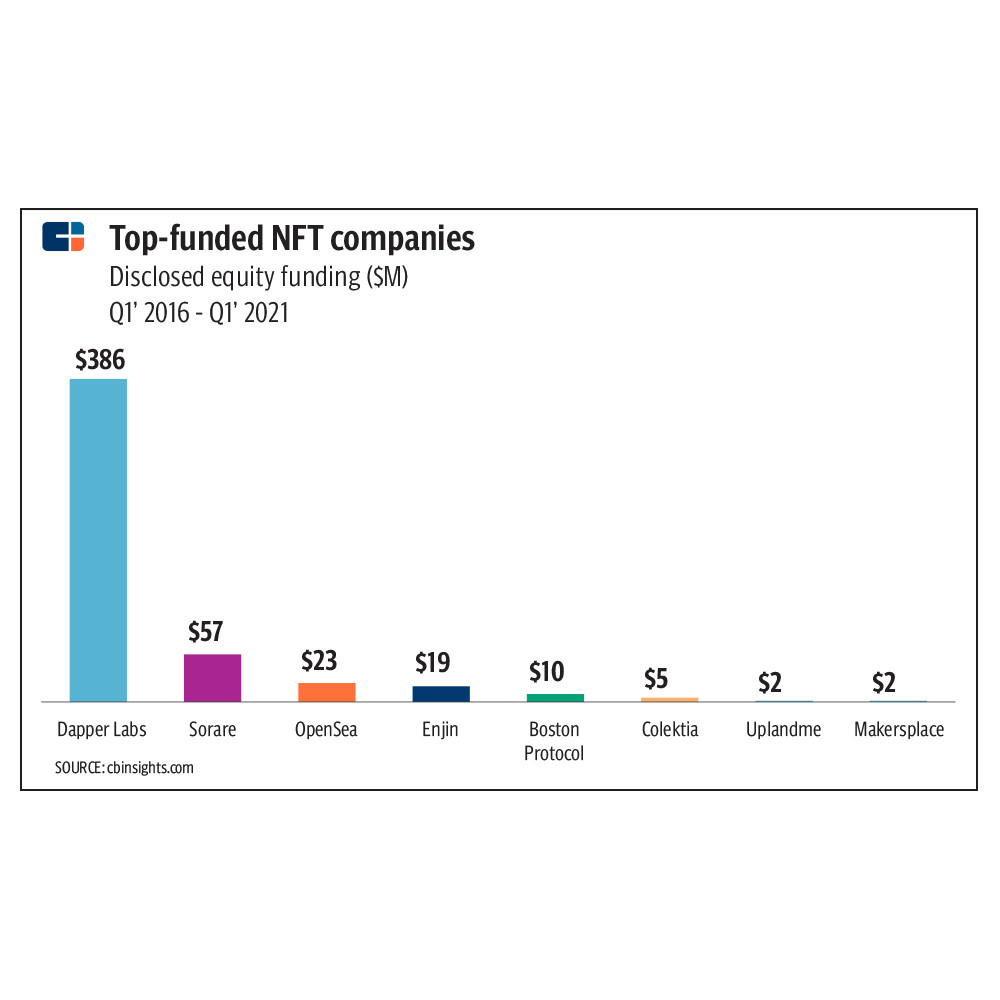 Umair Ahmad Khwaja, Co-founder of NFT focused platform Alter, clarified that contrary to popular belief, ‘Friendship Ended With Mudasir’ NFT was not the first NFT auctioned and sold in Pakistan.

“Instead, it is the costliest meme NFT sold in the country,” he underlined.

Cherishing the fact this his firm facilitated the transfer of the said NFT between the two parties, he stated that his enterprise was not the only firm working in NFT field in Pakistan and countless businesses specialising in this area in Pakistan have emerged across the country and the world.

“There are many others and we support their work. We are not looking to make profit right now rather we want to popularise the concept of NFTs” he said.

He appreciated that his business was receiving immense positive attention and said that there was a massive opportunity at hand in the Pakistani market and he aimed to take creators on board to create a win-win situation for everyone.

He detailed that the response to NFTs is brilliant and there are so many creators on board at Alter that the firm is having trouble contacting all of them.

“We are now working to secure a breakthrough contract and I can bet there is more to come in the world of NFTs,” he said.

Ayaz Bin Sabir, the second Co-founder of Alter, said that the response, received for the initiative from the Pakistani market and the world, was amazing and way better than anticipated.

“NFTs are a beginning to the world of new opportunities and they are supported by cryptocurrencies and blockchain,” he said.

He highlighted that since its launch in March 2021, his firm is now home to a massive catalogue of non-fungible tokens.

We began in March this year and had a lot of hiccups but overall it has been a good experience, he said.

“Not only in South Asia but people all over the world are contacting us now to showcase their NFTs,” he said. “Even western Europeans, who are well versed with the idea of NFTs, are approaching us with their art.”

He added that the prime aim of his initiative was to connect the people from emerging economies to each other for sale and purchase of non-fungible tokens.

Through the initiative, the co-founders look to provide creators a platform to showcase their creations and sell it to potential consumers.

“What we had in mind is that such creators lack public relations hence we intend to bridge that gap,” he said. “There is no shortage of talent in Pakistan and our aim is to enhance value of creators and get them in touch with those who are interested in purchasing their art.”

Oval NFT Founder Batool Aamir was of the view that things are just starting to take off in the NFT space in Pakistan largely due to the public’s attention from the sale of a meme for over $50,000 and recent rally in cryptocurrencies,.

Her startup helps business to strategise and implement the launch of NFTs across the spectrum from brands, artists and content creators to degree-awarding institutions, real estate and the public sector.

However, she voiced fear that consumers would mix the concept of NFTs with cryptocurrencies despite the fact that the two things are very different.

“My intuition is that those who bet on its price movements will lose and those who bet on the underlying technology will win in the longer run similar to the trend of internet in the early 2000s,” she said.

Talking about such platforms, Quecko Inc Founder and CEO Alee Abbasi remarked that there are diverse platforms for NFT bidding, buying and selling in Pakistan.

Some platforms involve a third party while others grant the owner complete freedom to trade NFTs, he detailed

Talking about his own business, he pointed out that it was involved in blockchain, cryptocurrencies, NFT minting and NFT trading. 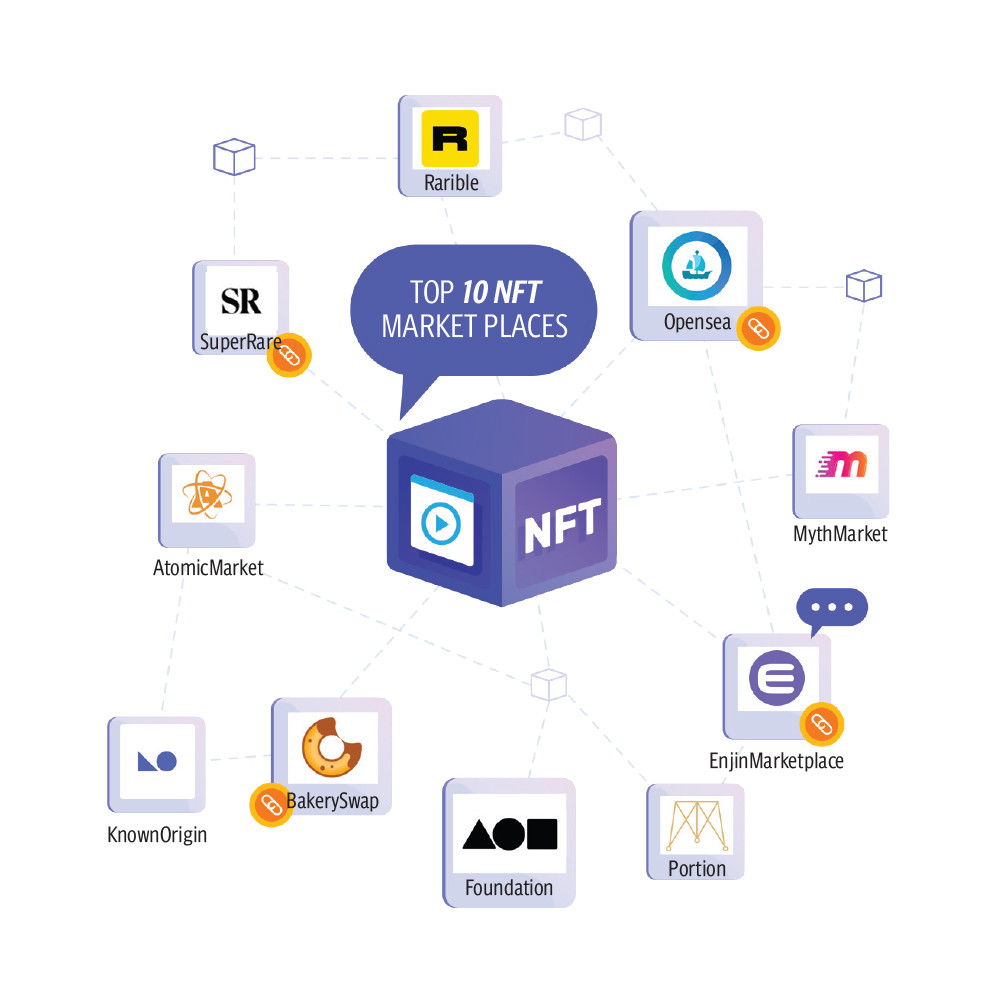 Elaborating on NFT minting, he underlined that it is a process of converting an art, music or video piece into a token that reserves the rights for the owner.

“After the process is performed, the owner can download the token and showcase their NFT to others or trade it,” he said. “A specific address of the NFT files is given to the owner that grants them full access to their property. To complete the process, blockchains like Etherium or Polkadot are used.”

However to mint the creation into a non-fungible token, the artist is required to own a crypto wallet as it helps in paying the fee for marketplaces and blockchain to convert the art into a token. Similarly, people who intend to buy NFTs should also possess crypto wallet to transfer the funds into the seller’s account.

“While trading NFTs, the owner and the buyer have to connect their wallets to the platform so that transaction can be completed,” he said adding that his company creates its own NFTs and sells them for revenue. “Our website can be used by creators for listing NFTs as well as for minting them.”

He clarified that his firm did not charge a penny for minting but still creators were liable to pay the fees to blockchain to convert their produce into tokens.

Moreover, he elaborated that the price of blockchain varies on type and size of NFTs. 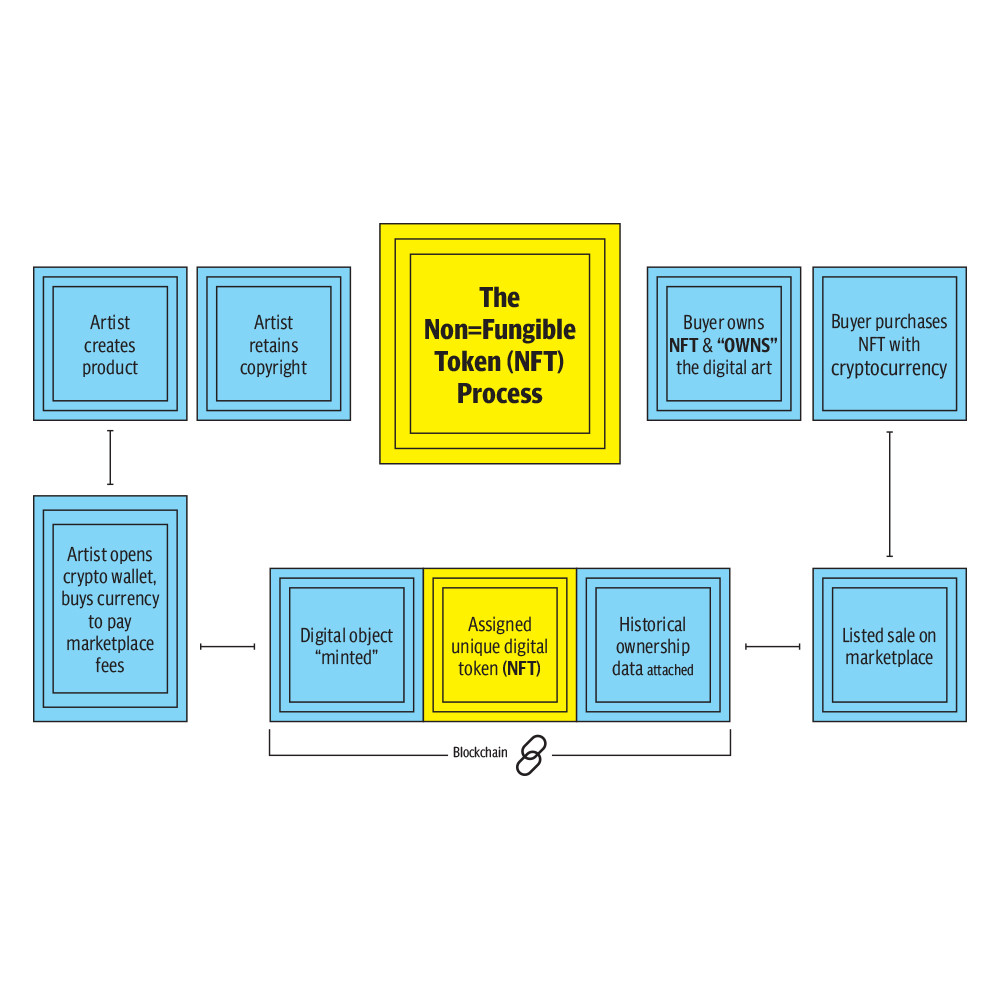 Sabir was of the view that there was massive need to raise awareness of NFTs among Pakistanis.

He admitted that few local creators from Pakistan were selling NFTs in the international market however there he stressed the need to highlight the potential of this relatively new technology for all Pakistanis to open new doors of opportunities and generate employment.

He reitereated that NFTs in Pakistan and the world were still at a nascent stage it was just the beginning even for NFT investors.

At present, he said that people and companies were converting movies and advertisements into NFTs to secure their rights or to sell them.

He concluded that a lot of institutions have to play a role in enhancing the outreach and knowledge of NFTs to the public of Pakistan.

Endorsing his views, Khwaja added that there was ample space to educate the market and rest of the public about NFTs.

“People in South Asia and Pakistanis in particular possesses immense potential in this regard and there is a need to tap this potential for greater good of whole nation,” he said.

Aamir said that young demographics of Pakistan, coupled with the country’s rapid movement towards digitalisation can aid it to emerge as a huge market for NFTs while NFTs could in turn solve numerous challenges present in Pakistan. It

“As we moving towards digitalisation, we will own more digital assets in future to collect, trade and exhibit for others,” she said. “These digital assets will soon emerge as the social currency of our society just like iPhones, watches and cars are at present.”

Right now, everyone is asking why would I they buy NFTs but eventually everybody is going to buy them. She drew similarities of present state of NFTs with Facebook in 2007 when people swore they would not sign up but 10-12 years down the line, almost all of them have Facebook accounts. 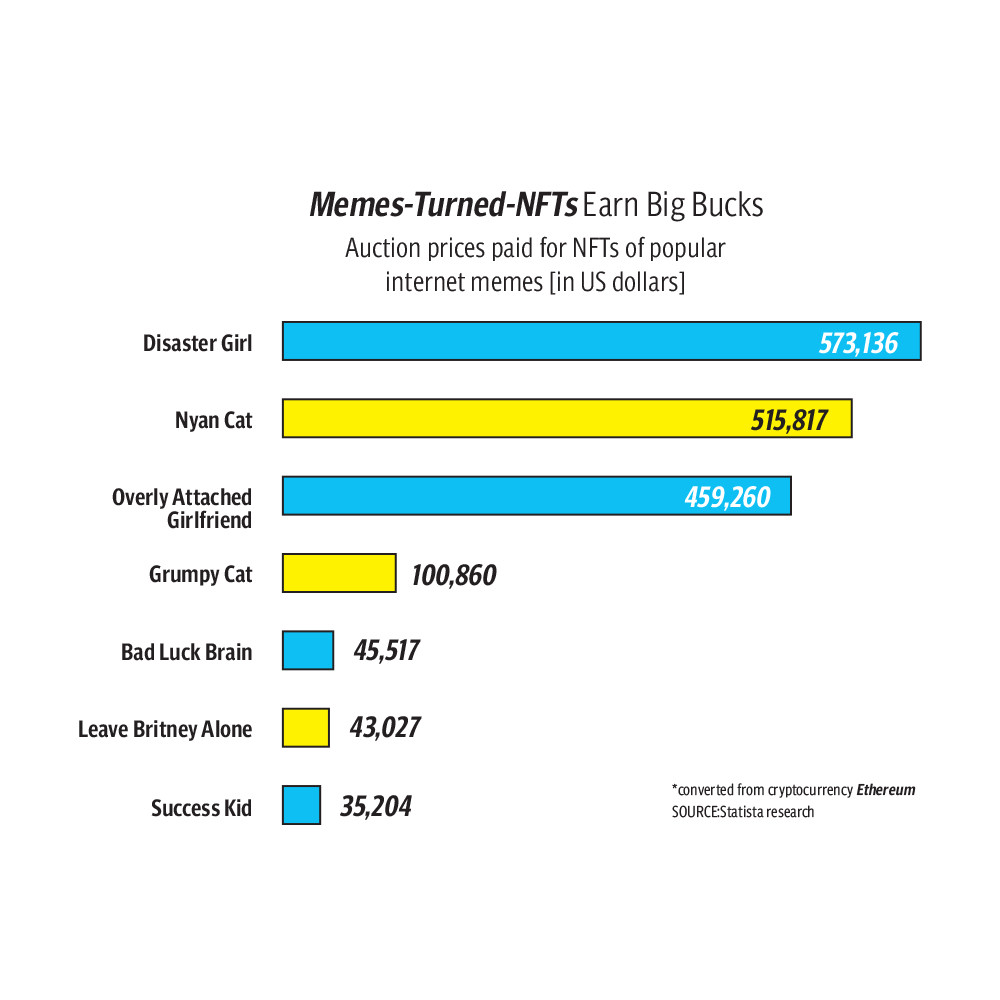 Talking about the challenges faced in dealing with NFTs, Sabir said that the foremost problem was cash flow. He outlined that startups are prone to difficulties hence the co-founders were discouraged by people to start an NFT focused business in the first place.

“They questioned about how we will be able to sell the NFTs if people will not get any royalties,” he detailed. “A new thing is always challenge and we were on our own at the start.”

He was of the view that a lot of people lack vision for innovation and since NFT is a relatively newer concept, people are unable to grasp it completely.

However, he voiced firm hope that NFT was here to stay.

Aamir flagged lack of awareness about NFTs as huge issue in Pakistan as people are confusing NFTs for an investment product rather than a technology that can be used to solve problems.

Abbasi talked about the problems faced by his firm and said that all clients wanted to be paid in cryptocurrencies however the status of cryptocurrencies is disputed in Pakistan hence it is difficult for his firm to pay sellers in digital coins.

“We tried to motivate them to use some other channels that are available and widely used in Pakistan and we encouraged them to involve the most prominent path ie the banking channel,” he said.

He added that cryptocurrencies and NFTs go side by side therefore an unclear status of the former threatens the penetration of the latter in the Pakistani market. Securing a crypto wallet while in Pakistan is another issue.

Sharjeel Awan, who manages product design and user interface at Quecko, noted that shortage of qualified human resources was a massive problem.

“Universities should focus on NFTs now and offer courses, workshops and seminars which would equip the graduates with the knowledge and enable them to excel in this field.”

He projected the trend of NFTs to accelerate in Pakistan in the coming years.