The last of Jinnah’s knights

The last of Jinnah’s knights

The last living passen­ger of the ‘flight of indepe­ndence’ recall­s his servic­e to Quaid-e-Azam.
By Haris Masood Zuberi
Published: August 14, 2011
Tweet Email 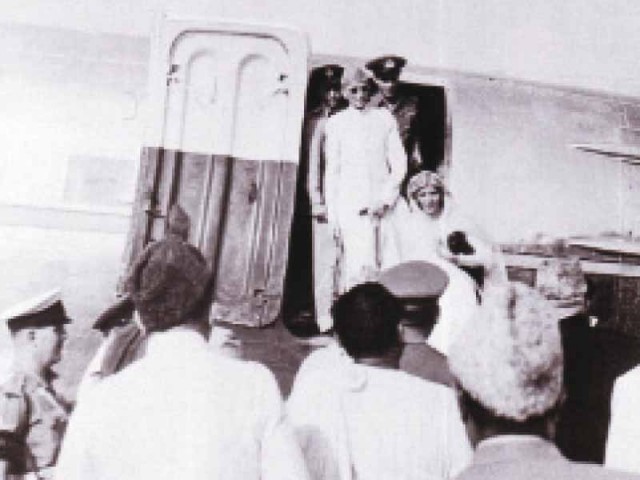 KARACHI: With a glimmer in his eyes and a spirit of youthful enthusiasm, Atta Rabbani, who served as Jinnah’s Aide-de-Camp (ADC) 63 years ago, recounts his experience of working for his former boss.

Rabbani, who is pushing 90, is the last living passenger of the historic ‘flight of independence’ that brought Quaid-e-Azam and Fatima Jinnah from Delhi to Karachi – which was going to be the capital of independent Pakistan – on August 7 1947.

He vividly recounts details of the flight in the silver Douglas C-47 (DC-3) Dakota aircraft which took off from Palam airfield in Delhi, without even a hint of a public farewell. Rabbani recalls that as soon as the plane was airborne, Jinnah categorically exclaimed “That is the end of it!”

As the passengers enjoyed an aerial view of Delhi’s landmarks for the final time, Rabbani noticed that the Quaid remained silent and lost in deep thought throughout the journey. “One can only imagine the sense of overwhelming responsibility he must have felt at that very moment,” Rabbani reflects on Jinnah’s contemplative state.

Yet in stark contrast to its quiet takeoff, the aircraft landed amidst a deluge of fanatic supporters at Mauripur (now Masroor) airfield in Karachi.

The overjoyed well-wishers surrounded the aircraft, overwhelming all arrangements made for the reception. “We could not see any recognisable faces from the window except those of Liaquat Ali Khan and Abdur Rab Nishtar!”

The slogans of “Quaid-e-Azam Zindabad! Pakistan Zindabad!” echoed endlessly to herald Jinnah’s arrival in Pakistan. This particular scene is also captured in a popular historic photograph.

“I am proud to have been just a step behind our leader at that historic moment. I was in uniform and it was hard to control my emotions and push back tears of joy!” the former ADC recalls fondly.

As the ADCs stepped out behind Quaid-e-Azam and Fatima Jinnah, the fervent crowd lifted them.

The former pilot has a repertoire of many such fond memories about his time serving Pakistan’s founding father. He narrates jubilantly how he, as a 24-year-old young flight lieutenant in the Royal Indian Air Force, got lucky enough to serve Jinnah.

“I used to secretly imagine serving Quaid as the pilot of his aircraft, but that seemed far-fetched since I was still a soldier of the British Empire,” he says candidly.

Yet he admits that he unwittingly almost missed out on his dream opportunity. “I intentionally ignored three signals from my headquarters to report immediately as I was unaware of my appointment as Jinnah’s ADC. When I finally returned to Delhi, I was immediately intercepted at the railway station by a relative who was an army major,” he recalls with a laugh.

When he rushed to Quaid-e-Azam’s residence, the leader questioned him in a commanding manner, “What kept you Mr Rabbani?” But soon after hearing his explanation, he approved the young officer’s appointment.

Rabbani served as Jinnah’s ADC for over seven months following independence. Subsequently he was summoned to serve as flying instructor at the Royal Pakistan Air Force  (RPAF) College in Risalpur. “I left Quaid’s house with a heavy heart. Even though he was reserved and formal, he was always very kind,” he recalls.

His last meeting with the governor general was in April 1948, when the latter visited RPAF College. During his visit, Jinnah patted Rabbani on the back and told him to visit Karachi. “His unprecedented gesture of affection made me feel an overwhelming sense of contentment,” he gushes.

“Till this day, I consider his pat on my shoulder as my knighthood; for me, it was the same as a monarch knighting a noble with a sword.”

Unfortunately the young pilot never got another chance to see Jinnah since he passed away soon afterwards. “When I visited Karachi a few months later, I paid my respects at his mausoleum,” says Rabbani ruefully.

The former flight lieutenant, who has witnessed the country’s drastic political transformation, candidly admits that the Pakistan dream has indeed gone sour. However, even at his age, he is certain that things will change for the better. “I am hopeful one day things will be on the right course — we have all necessary ingredients, the passion, hard-working people and military prowess. We can never we wiped out! All we need is the same spirit and unity as in 1947.”