In one of his obituaries for Saadat Hasan Manto, Muhammad Hasan Askari has vehemently defended the great but controversial short story writer by highlighting what may be termed Manto’s ‘double labour’.

Askari said that if Manto could not become as great a short story writer as Guy de Maupassant – as some writers of that time had suggested – it was more because of the literary tradition that he had inherited rather than any shortcoming on his part.

According to the erudite critic, the ‘form’ that Maupassant used had been developing in the French literature for some two centuries thanks to the works of a number of influential writers that included the likes of Voltaire, Stendhal and Gustave Flaubert. On the other hand, both the ‘content’ and the ‘form’ that Manto chose to employ were new in Urdu literature and Manto had to first ‘dig a well’ in order to quench his thirst.

“Manto’s status [in Urdu literature] is that of a forerunner both in terms of ‘content’ and ‘form,” Askari wrote. “Therefore, before making any final judgment about Manto, we will have to see what was happening in Urdu [fiction] before Manto; what his contemporaries were doing, and what he delivered or failed to deliver [in that particular scenario],” he added.

I don’t know what Askari sahib would write, if he were to pay tribute to another legendary artist – Dilip Kumar. However, in my opinion while the ‘content’ in the case of an actor is often pretty much pre-decided, Dilip Kumar was faced with the same challenge as Manto in terms of ‘form’.

As a forerunner for what was then a nascent Indian film industry, he had a short cinematic tradition to draw inspiration from. Dilip Kumar also had to do the ‘double labour’ – of digging a well and then drawing water from it.

If we use Askari’s argument, we will also have to see what was happening in the Indian cinema before Dilip Kumar; what his contemporaries were doing, and what he delivered or failed to deliver in that particular scenario – before making any final judgment about the recently deceased thespian and his legacy.

The pre-Dilip Kumar Bollywood was still a film industry still at the embryonic stage. As such, it was at that moment in time heavily relying on the conventions of earlier theatre. Even so, that early industry managed to produce exceptional enduring leading men in the form of Prithviraj Kapoor, KL Saigal and Ashok Kumar.

However, it was not until the arrival of a new generation of heroes – which included Dilip Kumar, Dev Anand, Raj Kapoor, Sunil Dutt, Guru Dutt, Rajendra Kumar and Raaj Kumar – in the 1940s that the Golden Era of the Indian film industry began, an era that continued till the 1960s.

This was a constellation of new stars whose brilliance, novelty and success overshadowed the film actors of the previous lot. But the only actor among these stars who was to leave a lasting legacy for the male artists of coming generations was Dilip Kumar.

Dilip Kumar was fluent in over half a dozen languages and was often commended for his pristine Urdu and immaculate dialogue delivery. But what made him a class part was the huge range of emotions – from love, rage, fear, paranoia, all the way to tenderness – that he had the power to portray.

The actor had started exhibiting versatility from the very beginning of his career in the mid-1940s – a versatility which most of his contemporaries, including Raj Kapoor and Dev Anand, lacked.

Dilip Kumar was rightly called “the King of Tragedy” for his harrowing portrayal of tragic heroes in a number of his earlier films – a streak of amazing performances after which he reportedly had to seek psychiatric help for depression.

And yet when he decided to take on lighter roles, he managed to conjure up an equally powerful magic on the silver screen. Dilip Kumar was one of those original performers who single-handedly provided enduring prototypes for a vast gallery of characters for the generations to come.

He stands out among his contemporaries as he is the ‘father’ of most of the angry young men, pure-hearted villagers, kings and princes, consumptive, alcoholic, tragic, light-hearted and jilted lovers and flirts and playboys that Bollywood has produced in the last 50 or so years.

He is not just one of the key influences on the work and style of the later actors including superstars like Amitabh Bachan, Rajesh Khanna and Shah Rukh Khan. He is one of those rare artists who have a lot to do in determining what Bollywood stands for today.

However, the greatness of Dilip Kumar does not only lie in his being the father of modern Bollywood heroes. He is also great because in many cases the subsequent generations of actors could not transcend the character prototypes that he created.

I admit that I have some reservations about a few of the roles that Dilip Kumar played later in his career. Yet, I believe that he is one of the few actors of the past generation, a major portion of whose work can be presented as the textbook example of great acting.

If someone from the younger generation wants to know how an actor can strike awe in the viewers without uttering a word, he should watch the brief sequence from Mughal-e-Azam in which Salim [Dilip Kumar] faces his father Shahanshah Akbar, [Prithviraj Kapoor] after the latter comes to knows about his love affair with a courtesan, Anarkali. Or if you want to understand how an artist can fill every word of a sentence with pathos, you should watch Dilip Kumar’s Devdas delivering this simple line: kitna dukh howa tha jab Paro ki shadi howi thi [How much pain I felt when Paro was married off].

I believe that even today no actor in Bollywood can pull off similar feats as smoothly. The work of this genius from Peshawar – who breathed his last in the morning of July 7 in Mumbai – will survive as long as there are people who can appreciate film as a creative medium. 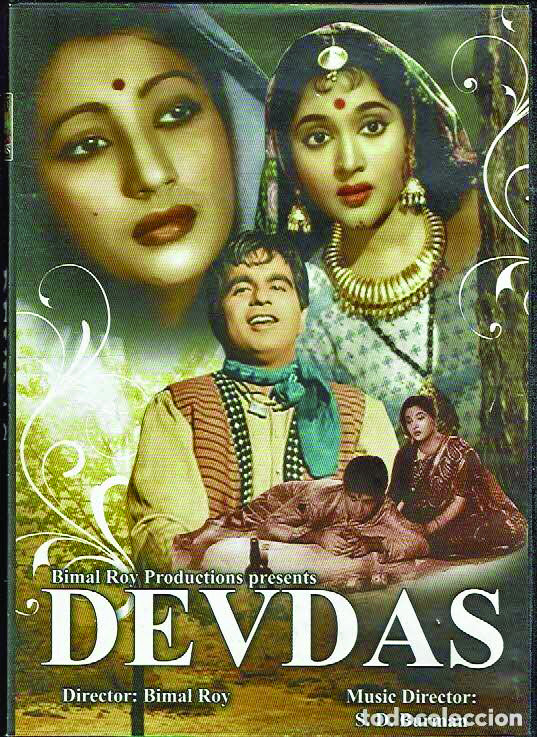 Based on Sharat Chandra Chattopadhyay’s eponymous novel, the film tells a harrowing tale about the destructive power of love. This film, directed by Bimal Roy, is set in rural Bengal of early 1900. Devdas [Dilip Kumar] loves his childhood friend and neighbor Paro [Suchitra Sen] since his childhood. However, Devdas’s father refuses to allow this marriage due to differences in the casts of the two families. Thus starts the tragic story of Devdas’s descent into self-destruction.

This is the story of a young man slowly wasting away in love and Dilip Kumar has shown his prowess as an actor par excellence. Dilip Kumar has shown how words become secondary when an artist delves into the deepest crevices of his character. Indiatimes Movies ranked Devdas amongst the Top 25 Must See Bollywood Films in 2005. Devdas was also ranked at #2 on University of Iowa's List of Top 10 Bollywood Films. The film was also noted for its cinematography and lighting under Kamal Bose, that enhanced the emotional torment of the tightlipped protagonist. Forbes included Dilip Kumar's performance in the film on its list, "25 Greatest Acting Performances of Indian Cinema"

Deedar is a tragedy that reminds one of Greek dramatist Sophocles, despite the fact that its main character Shyamu [Dilip Kumar] is a bagger and not a king. The film highlights the tragic destiny of love in a materialist society full of class inequalities. Shyamu, a man who is also visually impaired, decides to look for Mala, his childhood love, undeterred by the fact that Mala's father disapproved of their friendship many years ago. However, this quixotic quest ends up in a still greater tragedy when Mala could not recognize him despite his desperate efforts.

Deedar further established Dilip Kumar as the "King of Tragedy" while also highlighting his versatility and the power to adapt to any character. And even today, the film still draws universal applause because of two overriding factors: Dilip Kumar's effortless enactment of a doomed lover and pristine singing by Mohammed Rafi. In fact, Rafi's tear drenched voice enhances Dilip's lovelorn persona and music is the bedrock of the everlasting appeal of “Deedar”. The romantic musical film, directed by Nitin Bose, also starred Ashok Kumar, Nargis and Nimmi.

Another story of unrequited love, Mughal-e-Azam is set in the palaces and court of Mughal emperor Akbar with Dilip Kumar this time playing the role of rebellious prince Salim. According to writer Shahnawaz Farooqui, the film is another proof of the versatility of the thespian as few people have been able to appear as elegantly princely on screen as Dilip Kumar in Mughal-e-Azam. It is said that initially director K Asif had rejected Dilip Kumar for the part of Salim. Dilip Kumar was also reluctant to act in a period film.

However, he accepted the role upon the insistence of the film's producer. According to Dilip Kumar, K Asif later trusted him enough to leave the delineation of Salim completely to him. And Dilip Kumar gave a new lease of life to historical Saleem in popular culture and imagination. The film is now widely considered to be a milestone of its genre, earning praise from critics for its grandeur and attention to detail. It broke box office records and became the highest-grossing Indian film of all time, a distinction it held for 15 years. 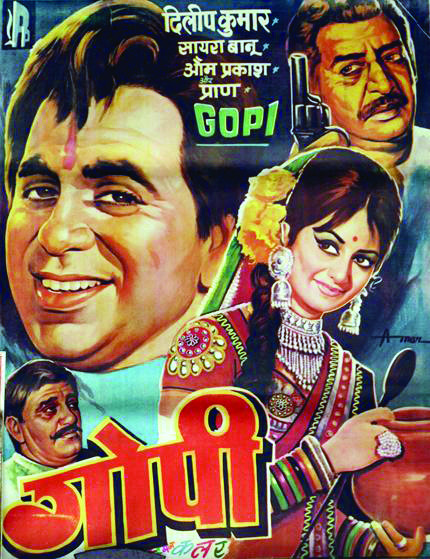 According to some biographies, Dilip Kumar went into depression due to his continual portrayal of tragic characters – particularly after Devdas – and a psychiatrist asked him to take up a lighter role as a therapy. Dilip Kumar did Gopi along with his wife Saira Banu in 1970 and further established that he was not just the “King of Tragedy” but also the “King of Comedy”. It is the story of an eponymous hero who is falsely accused of theft by an evil landlord. When Gopi’s brother throws him out, he goes to the city and vows to return only after making money. Gopi is a lighthearted movie that puts a smile on your face but it also makes you fall in love with the simple people of villages who have pure hearts and for whom human relationships are the most important value in life. Playing a rustic hero, Dilip Kumar also set a benchmark for a future generation of actors, portraying countrymen. Gopi is a must watch for all those who want to dis