What would you give for a wish?

The banks of the mighty River Indus and its tributaries have nourished human settlements for as long as human history stretches. It was the site where one of the world’s three original civilisations took root and in the centuries that followed, multiple thriving cultures, industries and economies were nourished.

But settlements and craft is not all the Indus has sustained. Along its banks emerged a rich spiritual tradition that finds little parallel elsewhere. In the myriad shrines that dot it, a rich Sufi culture centred on sons of the soil turned patron saints have flourished, and they in turn have birthed a new economy – a spiritual economy – in the cities and villages that surround them.

In the riverine cities of Sukkur and Rohri, located across from each other and cut by a vein of the Indus, for centuries people have been turning to saintly shrines whenever they need a wish to be granted. As common in most of Pakistan and parts of India, the residents of the twin cities pay homage to saints and offer prayers and offerings to secure certain mannats. The offerings, when they have to be made, take various shapes – a floral wreath sometimes or lush fabric, even something as simple as a meal for the poor. But some shrines and some wishes require more unique tokens of devotion. Either way, the people do whatever it takes to appease the holy entombed.

The shrine of Makhdoom Pir Syed Rajan Qattaar Jahania, known more popularly as ‘Rajan Mast’, is one shrine that requires offerings with a unique twist. In order to secure the entombed saint’s favour in granting their mannats, devotees must make an offering of a donkey. Not that far away lies the shrine of another local saint, Hajna Shah Hazoori. The offering he requires may be a simple one, but no less unique – a meal of Machhi Maani or fish with roti.

A donkey for your wishes

The shrine of Rajan Mast is located some 15 kilimetres outwards of Sukkur, where Sindh’s third-largest city meets the district of Khairpur. According to the shrine’s caretaker Syed Atif Jahania, Rajan Mast came from a long line of Sufi saints and was the grandson of legendary saint Syed Ali Sarmast, who lays in Sehwan Sharif, not too far from the shrine of Lal Shehbaz Qalandar. “He [Mast] belonged to the Makhdoom Jahania clan of Uch Sharif in Southern Punjab and had migrated to Sindh some 150 years ago,” told the caretaker.

Offering an explanation for the peculiar offering of donkeys, Atif Jahania said that it is linked to the saint’s love for riding the animal. “So although people bring all kinds of offerings to the shrine, including flower wreaths and cloth, a donkey’s donation is a must whenever one needs their wish to be granted.”

The donkeys offered to the shrine, he told, are kept on shrine premises and eventually sold to fund the site’s upkeep, which isn’t supported by the concerned government departments. “People come here all the way from Balochistan, Punjab, Sindh and even Azad Kashmir to pay homage to the shrine and feed the donkeys, especially on the eve of the annual Urs, held on the 14th, 15th and 16th of Shaban,” remarked the Atif Jahania.

According to local beliefs, an ordinary animal once offered to the shrine, is exalted in status. This makes the donkeys offered to the Rajan Mast shrine the most ‘special’ and valuable in the local market. “We do not put a price tag on the donkeys we get ourselves. But those looking to buy them are usually to spend as much as their pockets will allow on these outstanding animals,” he shared.

According to Atif Jahania, people with all sorts of problems, mostly health related issues, come to the mazar looking for spiritual and physical reprieve. “The ill get well, and the barren start to beget,” claimed the caretaker. He said that the sick are often required to stay at the dargah for four nights, during which they are treated by the saint. “Similarly, a childless woman, who desires a child stays at the shrine for seven Mondays and her wish comes true,” he asserted. Talking about the miracles of the saint, he claimed that the wished-for child is usually born with a black spot on his or her body, which is covered with donkey hair. 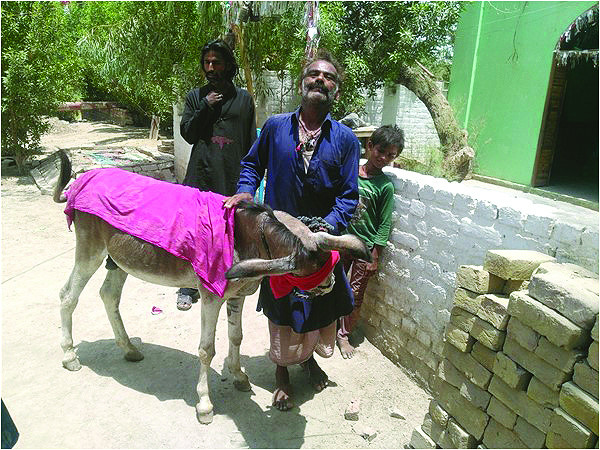 Devotees of Rajan Mast, countless in number, talk of miracles, their stories of which reflect an unmoving belief in the saint and his healing abilities. One of the devotees, Qadir Bux, who had journeyed from Kashmore, said that his ailing wife had developed a severe headache, which despite costly treatments in government and private hospitals remained uncured. So was the case until a friend of Bux told him about Rajan Mast and all that he can heal from beyond the grave. “It is my wife’s second day here and she is already started feeling better. It looks like she will recover, in return of which I look forward to offering a donkey to the shrine,” claimed the new devotee.

Ali Akbar Jatoi, yet another devotee from Jacobabad, is a regular visitor of the dargah and this time he is here to get rid of a persistent fever. “I often visit the dargah, stay here and drink water from the earthen pots and get well”, he said with great confidence.

Elderly Ghulam Mustafa and Fakir Mohammad on the other hand, have been living at the dargah since their childhood. Both of them have devoted their life to the service of the shrine and its devotees. Fakir Mohammad, alias Fakiro narrated that Rajan Mast loved donkeys so much that he would ride them everywhere, and oddly when saddled, face the donkey’s tail instead of the head. When enquired about the saint’s peculiar habit, the Fakiro fumbled for an answer but nothing came to his lips. However, he claimed that many childless couples have been blessed with children with the intercession of Rajan Mast. “Out of whom, two families used to live in Babarloi town, but now they have moved to Hyderabad,” he told.

However, residents of the town appear far less entranced by Rajan Mast’s supposed miracles and hold varying opinions about the shrine. A man, who runs a grocery shop a stone’s throw from the shrine, chuckled at the stories narrated by the shrine’s caretaker. The grocer who claimed that he’s spent close to 50 years in the town, said that he had never come across a single child who showed any condition that could resemble patches of donkey skin or hair. “The offerings are nothing more that a business to mint money,” he contended as he asked, “what is so special about someone riding a donkey a hundred years ago anyway? It was a popular means of transport back then.”

Even so, the shrine’s ‘true-believers’ testify to seeing many with broken limbs walk out of the shrine on their own two feet, after being healed by the miraculous powers of the saint. “If there was nothing good here, then what is the use of people visiting the dargah from all across the country?” questioned a devotee.

The Civil Surgeon of Rohri 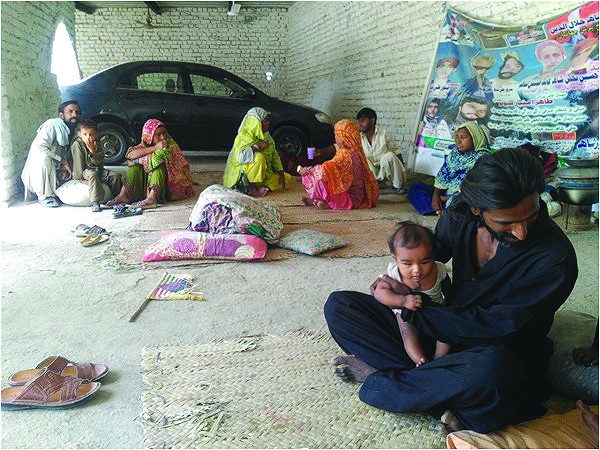 Similarly, at the dargah of Hajna Shah Hazoori – who is popularly called the ‘Civil Surgeon by locals – in Rohri, devotees and believers journey from near and far to have their wishes granted. In exchange, the unique offering made by them in the saint’s honour is a simple meal of fish and roti, known in local parlance as Machhi Maani. This meal is duly distributed upon acceptance of a wish.

Much like the Rajan Mast shrine, this shrine too welcomes many lacking trust in modern medicine and looking to be healed by the power of faith. “Those who come here hang a padlock or tie a thread on the dargah’s outer fence. Once their wish comes true, they come here again to remove their locks and threads and distribute the fish and bread among the needy,” said Abdul Ghaffar, the shrine’s caretaker.

The offering of fish and bread (roti), explained Ghaffar, signifies health, happiness and prosperity in the Indus region. “The shrine too is located on the river’s bank, where fish swimming upstream and downstream jump out of the water to pay homage to the saint,” he claimed.

According to Abdul Rahim Channa, a devotee of the shrine, when his elder brother was diagnosed with kidney stones and was afraid of going under the knife, the shrine was their only refuge. “We did the routine here for four days and my brother’s pain went away, that’s how we knew the stone had miraculously passed. The x-rays confirmed that too,” said Channa.

Similarly, Mai Hooran from Shikarpur was a tuberculosis patient who could not afford to purchase costly medicines, and brought to the shrine as last resort. Here, she claims, she stayed for seven days and and that’s all it took for her ailments to disappear. Now, a true devotee, she visits the shrine on every Thursday to pay homage to the saint. Similar are the stories of other devotees, who visit the shrine on a regular basis, seeking the blessings of the saint.