Pakistani youth: An icon for change

Pakistani youth: An icon for change 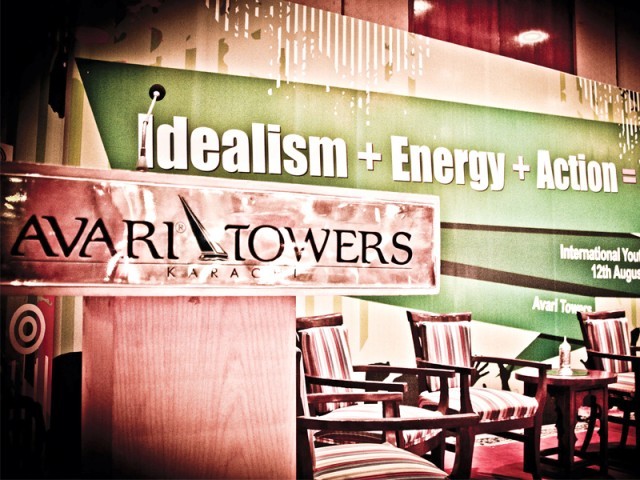 Youth Day 2011 was celebrated in the city-PHOTO-FILE

August 12 heralds International Youth Day and training, mentoring and consultancy firm Blinck took this opportunity to collaborate with the US Consulate General Karachi, to organise a panel-based interactive discussion. The theme of the discussion was ‘Youth Participation in Decision Making: Taking Charge of Your Dreams and Destiny’ and it took place at Avari Towers on Friday.

William J Martin, US Consul General in Karachi said, “Your talent, creativity and entrepreneurial skills are transforming various fields and sectors. Let us move forward in sharing the commonalities that exist between United States and Pakistan. The youth of Pakistan fills me with optimism and I see Pakistan in great hands.”

A panel discussion ensued, during which laudable Pakistanis shared their experiences with the younger audience.

Former mayor of Karachi, Mustafa Kamal shared, “I come from a middle class background — once you are in the field of politics, you are in state of war. In the city, people can transform societies, if they have the concept of ownership entwined in their minds and hearts. Life is not a bed of roses. Neither is a political position, it comes with a lot of responsibility.”

Documentarian and journalist, Sharmeen Obaid Chinoy said “I have worked in war zones from Afghanistan to East Timor. We in Pakistan take so much for granted; from the rights granted to us, to the beautiful country we are blessed with.” On mustering the courage to bring a change, Chinoy added, “Whoever has grown up in Karachi during the 1980s and 1990s is fearless and can stand up to anything. Courage is something we are born with.”

Popular vocalist and actor Komal Rizvi explained that, “The society we live in, it’s here that girls have significant problems that we have to deal with if you plan to step forward and make a change. We don’t need to bring ourselves down! I believed in myself. I believe everything in the universe conspires to make things happen for you.”

Social entrepreneur Farhad Karamally said it was inspiration that motivated him to become someone. Palwasha Bashir, national badminton champion, declared “When you have the will, nothing matters to you.” She asserts that what the world says shouldn’t matter if you have your parents’ support.  Karamally agreed, “People should do what they love best, they shouldn’t be bothered by societal norms and values, if they plan to change/transform a society.”

Each speaker faced drawbacks in their career: Karamally was considered too young to run a city; Obaid-Chinoy’s first documentary was rejected by 80 production houses; Rizvi met countless problems at home; Karamally couldn’t think out of the box till he looked within; Bashir  didn’t think of herself a winner. But they each had passion within themselves, and over the passage of time this allowed them to overcome difficulties. Eventually, each did remarkably well.

Youngsters were encouraged to remember that overcoming problems requires ignoring negative energy. Positivity allows inner talent to burst free, and transforms one into an inspirational icon.

Vaneeza Ahmad: The entrepreneur with a fashion streak