The government of Sindh has planned to meet its budget expenditures mostly through federal receipts, however, it has also decided to enhance its collection through indirect taxes and increase borrowing from banks to finance the budget deficit for next fiscal year.

The government has halved the revenue collection target on account of income tax on the agriculture sector. It has planned to collect higher tax revenue on natural gas production despite a significant drop in energy output in the province.

It plans to enhance tax collection from professions, trades and (phone) callings while halving the non-tax revenue collection target for the year.

The government has also proposed to slash the stamp duty rate for services including rental basis and transfer of property within the province. The Sindh government’s reliance on indirect taxes, which the common man pays on purchase of goods and services, will grow to 96.25% (or Rs293.56 billion) of the total tax collection during next fiscal year 2021-22.

The government had estimated indirect tax collection of 92% (or Rs242.41 billion) of the total tax revenue in the outgoing fiscal year 2020-21. More importantly, the government has revised down its direct tax collection target for the outgoing fiscal year following the receipt of a meagre Rs5.38 billion compared to the initial estimate of Rs21.10 billion.

For the next fiscal year, the government plans to collect Rs2 billion in tax on agricultural income compared to the outgoing year’s initial target of Rs3.87 billion. Farmers, however, paid a meagre Rs645.57 million in tax during the current year.

The tax collection target stands negligible compared to the total agricultural expenditure of Rs26.55 billion planned for fiscal year 2021-22, revealed the budget document. The Sindh government has planned to borrow Rs45 billion from banks in FY22 against the initial target of Rs20 billion for FY21. It, however, borrowed Rs30 billion during the current fiscal year.

“I am pleased to announce that we are not proposing any new taxes for next financial year (FY22),” Shah said while presenting the budget.

“We are facing a shortfall on account of federal transfers,” he said. “During 11 months of this financial year, we have only received Rs623.61 billion against budgeted receipts of Rs696.94 billion.”

Based on these figures, the government is facing a shortfall of Rs83.8 billion (in FY21), he said. 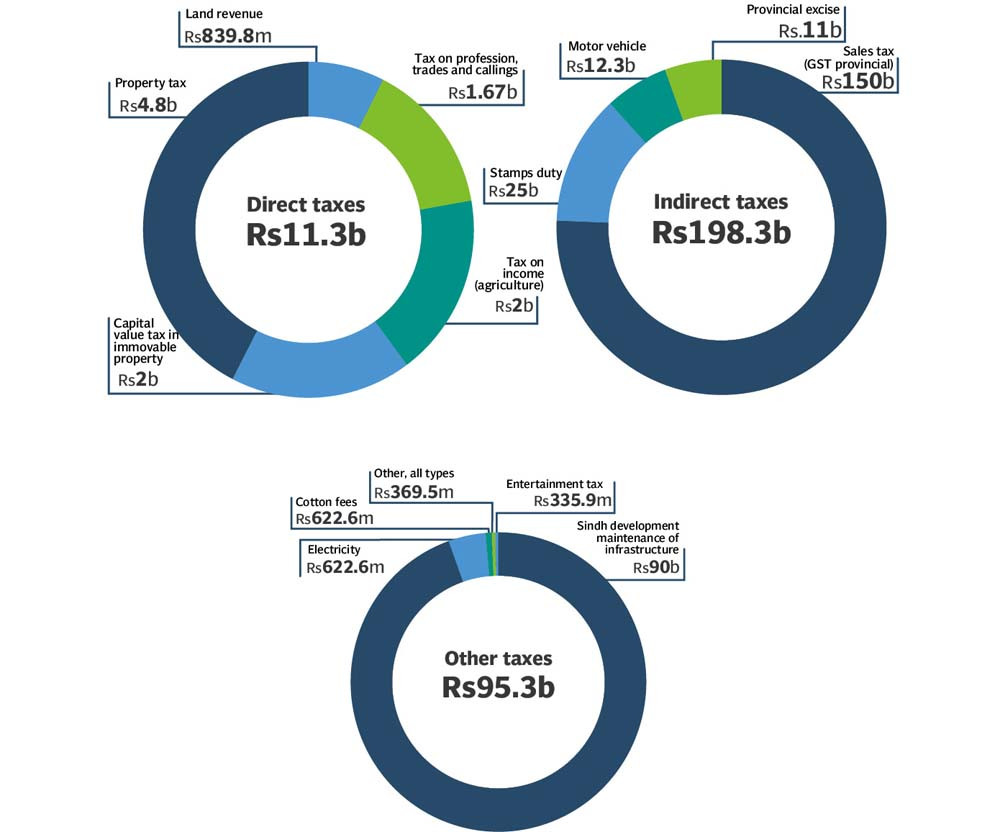 The rate of stamp duty on conveyance/sale and other instruments on transfer of immovable property has been reduced from 2% to 1%. Following the reduction, the stamp duty applicable to the Power of Attorney is being reduced from 3% of the amount purchased to 1% of the valuation table or floating rate charged on the actual amount.

The existing rate for standalone recruiting agents is being reduced from 8% to 5% for FY22. This shall remove the multiplicity of rate by abolishing the existing rate of 8%.

It has taken steps towards automation of tax collection systems. It has worked out a plan with the State Bank of Pakistan (SBP) under which the tax collection machinery will witness increased automation as the public will be able to pay taxes online through an alternative delivery channel, the Sindh CM said.

“We also expect to increase property tax collection manifold when it is automated,” he said. “We are also in the process of introducing smart cards for vehicle verification and for eliminating fake registration of motor vehicles.” “We plan to automate stamp duty collection, a major component of our tax collection stream in the next financial year,” Shah said. “The planned automated system will be deployed using ADC under State Bank of Pakistan and it is expected to increase our stamp duty revenues by about 100%.”

The Board of Revenue is diligently working towards its implementation, the CM informed the public.

Fawad slams Sindh govt for ‘zero development’ despite being given funds