Novak Djokovic captured his second French Open title as he recovered from being outplayed for two sets by Stefanos Tsitsipas to win 6-7(6) 2-6 6-3 6-2 6-4 victory on Sunday.

Djokovic's seismic semi-final win over 13-time champion Rafa Nadal looked like being in vain as an inspired Tsitsipas moved to the brink of becoming Greece's first Grand Slam champion.

After failing to convert a set point in an enthralling 72-minute opener full of brutal rallies and then crumbling in surprising fashion in the second set, Djokovic looked drained. 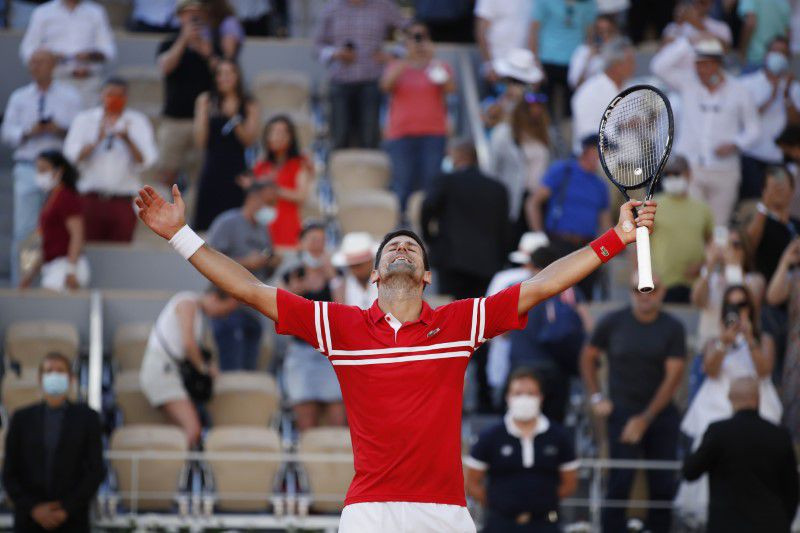 His hopes of banking a 19th Grand Slam title were hanging by a thread but he rediscovered his mojo in the nick of time to turn the match around in emphatic fashion.

The 34-year-old, who won his first French crown in 2016, rattled through the third and fourth sets as Tsitsipas, playing in his first Grand Slam final, struggled to maintain the intensity that had put him in charge.

Fifth seed Tsitsipas appeared to be struggling physically but valiantly tried to dig in at the start of the fifth set as the shadows spread across a sunlit Court Philippe Chatrier.But Djokovic got the early break in the decider and although he was pushed hard, he was never threatened again.

There were nerves as he served at 5-4, netting an easy volley and then seeing a Tsitsipas backhand flash past him on championship point. But Djokovic would not be denied as he claimed victory by angling away another volley at the second time of asking after four hours 11 minutes.

In moving just one behind the record of 20 shared by Nadal and Roger Federer, Djokovic became the first player in the professional era to win each Grand Slam title at least twice.

"It was again an electric atmosphere. Nine hours of tennis in less than 48 hours," Djokovic said on court.

"It's not easy; physically and mentally it was very, very difficult for me, these three days. I believed in my capacities and in my game. It's a dream come true."