Kashif­ul Islam is on board MV Albedo that was hijack­ed in Novemb­er 2010.
By Fazal Khaliq
Published: August 13, 2011
Tweet Email 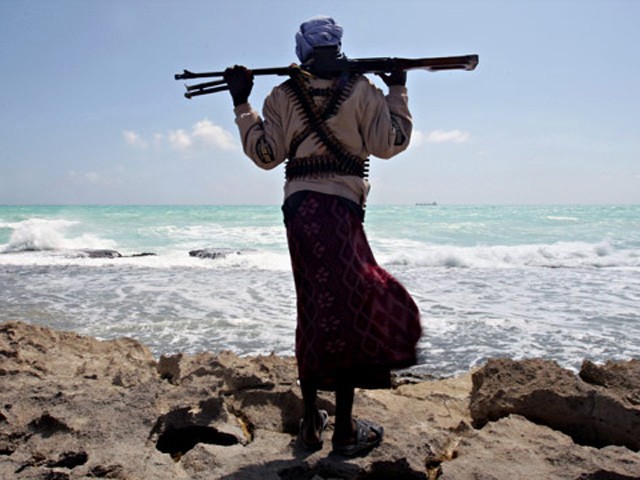 Kashiful Islam is on board MV Albedo that was hijacked in November 2010. PHOTO: FILE/AFP

Kashiful Islam’s family is hopeful that he will be with them this Eid. But given their meagre financial condition, Kashif’s return seems a long wait ahead.

Kashif, 24, was among the 23 crew members of Malaysian vessel MV Albedo which was hijacked by Somali pirates in November 2010. The ship, which was carrying containers for Mombasa from the UAE, had crew members from Pakistan, Bangladesh, Sri Lanka and Iran, and is yet to be released.

Kashif, who is from Dir, lived in Swat and had gone on his first journey as a seaman. Five months ago, Kashif spoke to his mother by phone and since then, there has been no contact. Kashif is married and has two children.

“My son had gone abroad to earn a living for his family. This was his first journey,” Ismaeel, Kashif’s father, told The Express Tribune. “We are poor and helpless. I request the government to take steps for the release of my son and other crew members.”

“I miss my father. When my friends ask about him, I have no answer. I tell them he has gone abroad to bring toys for me,” says Kashif’s son Hazrat Zayed, 8. “I hope he will come to celebrate Eid with us.”

It was not immediately clear how much ransom was demanded but, according to Kashif’s uncle, the family has no money to pay for Kashif’s release. “I appeal to the government of Pakistan to take action and raise this issue internationally so that the abducted people can be released,” he said.

In June, Pakistan Navy rescued the MV Suez, with four Pakistani sailors on board, after paying $2.1 million in ransom.