Israel either has deep pockets or Professor Xavier on their payroll: Sheheryar Munawar

The ceasefire between Israel and Hamas in the Gaza Strip appears to be holding, with the exception of tension in occupied East Jerusalem where Israeli police stormed the Al-Aqsa Mosque compound moments after the ceasefire was announced.

However, many including Mark Ruffalo, who initially called out Israel for committing war crimes and genocide, are now presenting a rather neutral stance on the matter. This has shifted the debate from terrorism, forced displacement, settler colonialism and ethnic cleansing to anti-Semitism.

Not only that, Pakistan’s Foreign Minister Shah Mahmood Qureshi was also accused of using an anti-Semitic trope by CNN journalist Bianna Golodryga after he accused Israel of having “deep pockets”. But it is pertinent to specify that anti-Semitism is the hostility to or prejudice against Jewish people, not Israel.

So amidst the diverting of narratives, actor and producer Sheheryar Munawar took to his Instagram Stories and wrote, “When reputable foreign media agencies quote more than 200 ‘dead’ – how did they one day just internally combust? – and 12 Israelis ‘killed’, it proves Israel either has deep pockets or Professor Xavier on their pay roll controlling minds.” 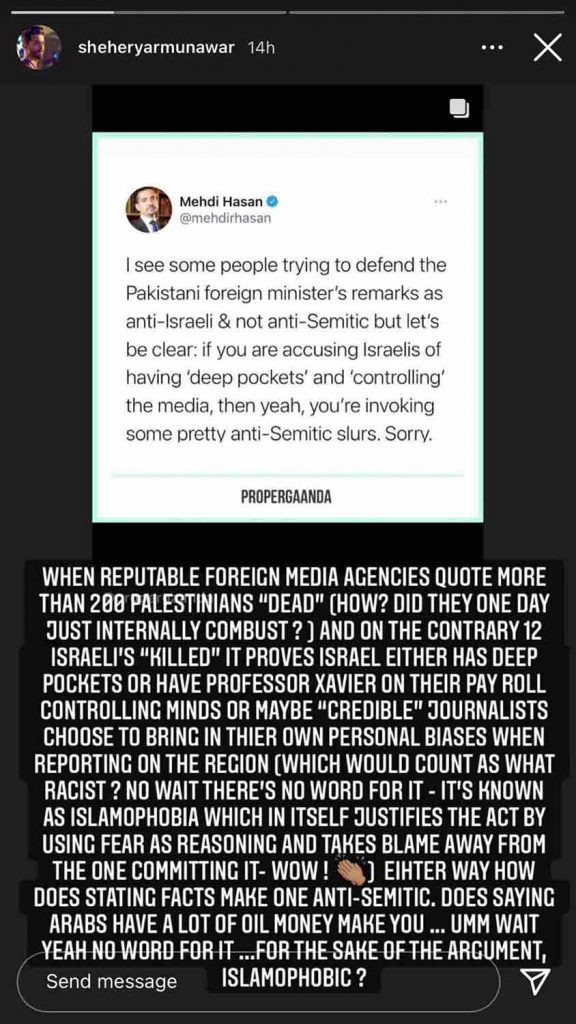 Taking a jibe at British-American political journalist Mehdi Hasan’s comments on Qureshi’s interview, Munawar added, “Or maybe ‘credible’ journalists choose to bring in their own personal biases when reporting on the region (which could count as what racist? No wait, there’s no word for it – it’s known as Islamophobia which in itself justifies the act by using fear as reasoning and takes blame away from the one committing it – wow).”

The Parey Hut Love actor then asked, “Either way how does stating facts make one anti-Semitic? Does saying Arabs have a lot of oil money make you…umm wait, yeah no word for it…for the sake of argument, Islamophobic?” Munawar then drew the line, “There’s a difference between being anti-Semitic and anti-Zionist. Just as every Muslim is not a Taliban, every Jew is not Zionist.”

He continued, “Am I or can the narrative from this side be called anti-Zionist? Yes! But we are anti-Zionist because we are anti-fundamentalism, whether we’re Muslim or Jewish.” 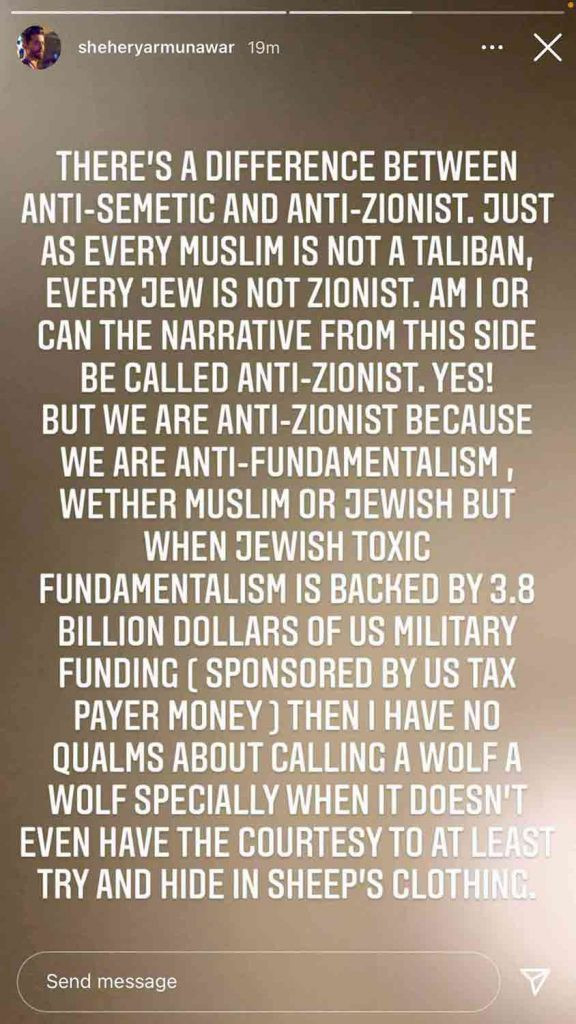 Addressing the audacity of Israel and the press allegedly backing it up, Munawar added, “But when Jewish toxic fundamentalism is backed by $3.8 billion of US Military funding (sponsored by US tax payer money), then I have no qualms about calling a wolf a wolf. Especially when it doesn’t even have the courtesy to at least try and hide in sheep’s clothing.”

The Egyptian-brokered ceasefire between Israel and Hamas came into effect in the early hours of Friday after 11 days of relentless Israeli bombing of the besieged enclave that killed at least 248 Palestinians, including 66 children, according to Aljazeera. Egyptian mediators are now trying to sustain the ceasefire.