BHC to take up plea against Asim Bajwa today

A producer told me, 'Friends' won't make you a star: Jennifer Aniston in reunion trailer

Highlights atrocities by Israeli forces, the miseries of Palestinian people and threats to regional peace

A Palestinian man looks out as the remains of a building, which was destroyed in Israeli air strikes, are reflected in a window, amid Israeli-Palestinian fighting, in Gaza, May 20, 2021. PHOTO: REUTERS

The foreign minister's remarks came during a dinner hosted by him at Pakistan's Embassy in New York in honour of the foreign ministers who arrived there to participate in the United Nations General Assembly's emergency session on the situation in Palestine.

FM Qureshi left for New York from Ankara on May 19, continuing his diplomatic peace mission against the ongoing Israeli atrocities targeting the people of Gaza. 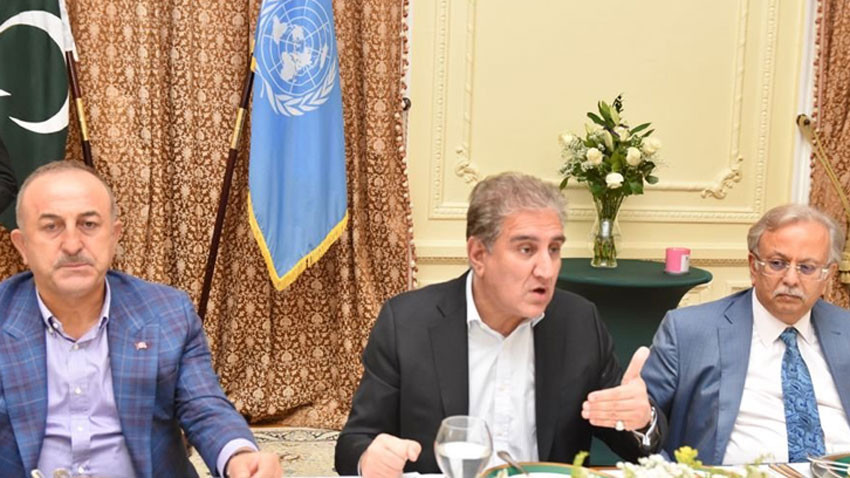 The minister is accompanied by his counterparts from Palestine, Sudan and Turkey during the visit.

During the dinner, Qureshi highlighted atrocities being committed by Israeli forces, the miseries of Palestinian people and threats to regional peace, and diplomatic efforts made by Pakistan in this regard.

The foreign minister of Tunis and the President UN General Assembly and Permanent Representatives of OIC member countries also attended the reception.

Prior to his departure to US, Qureshi held a meeting with his Palestinian counterpart Riyad al-Maliki during which he exchanged views over the evolving situation in the besieged Gaza.

During the meeting, he conveyed the resolve of the Pakistani leadership, especially Prime Minister Imran Khan, to continue supporting the Palestinian struggle for their right to self-determination.

The minister strongly denounced Israeli aggression against the people of the occupied territory.

Qureshi will attend an emergency meeting of the United Nations General Assembly tomorrow and will draw the attention of the international community towards the ongoing Israeli aggression against the Palestinians.

He will urge the world body to play its due role in bringing an end to the atrocities.

The minister will also hold important meetings with the UNGA president and other diplomats to highlight Pakistan's stance on regional and international issues, with a focus on the situation in Palestine.

During an interview with the Anadolu Agency on Wednesday, Qureshi said Pakistan is banking on the UNGA to play its role to evolve a consensus that leads to a cease-fire, de-escalation and an end to atrocities in Palestine.

FM Qureshi banks on UNGA to play role for Palestine

At least three rockets fired from Lebanon towards Israel