China preens in UN spotlight over Mideast as US isolated

Thousands rally in solidarity with Palestinian struggle in Karachi

Over a thousand Karachiites gathered at the Karachi Press Club in solidarity with Palestinians as Israel continues to bomb the Gaza strip.

Charged political and civil activists held up banners, flags and placards demanding an end to Israeli aggression, which has left nearly 200 dead in recent days. With the sun beating down their backs the protestors shouted anti-Israel slogans and called for collective action in support of the Palestinian liberation struggle.

Addressing the rally, protest organiser Hamza Harris said one of the primary demands of this demonstration was an immediate ceasefire. “Israel needs to stop bombing Gaza, it needs to stop forcing evictions.”

He also spoke at length about boycotting Israeli products.

“We demand the Pakistani government make pro-BDS (Boycott, Divestment, Sanctions) rules. We want to put pressure on our government to help with the boycott,” he said.

“Factories in Pakistan that share their profits with internationally recognised Zionist agencies should stop doing so and form a local body of their workers - and this can only happen with the help of our government.”

He added the Pakistani government needs to step in and spread awareness about the Palestinian cause from 1948 till date. 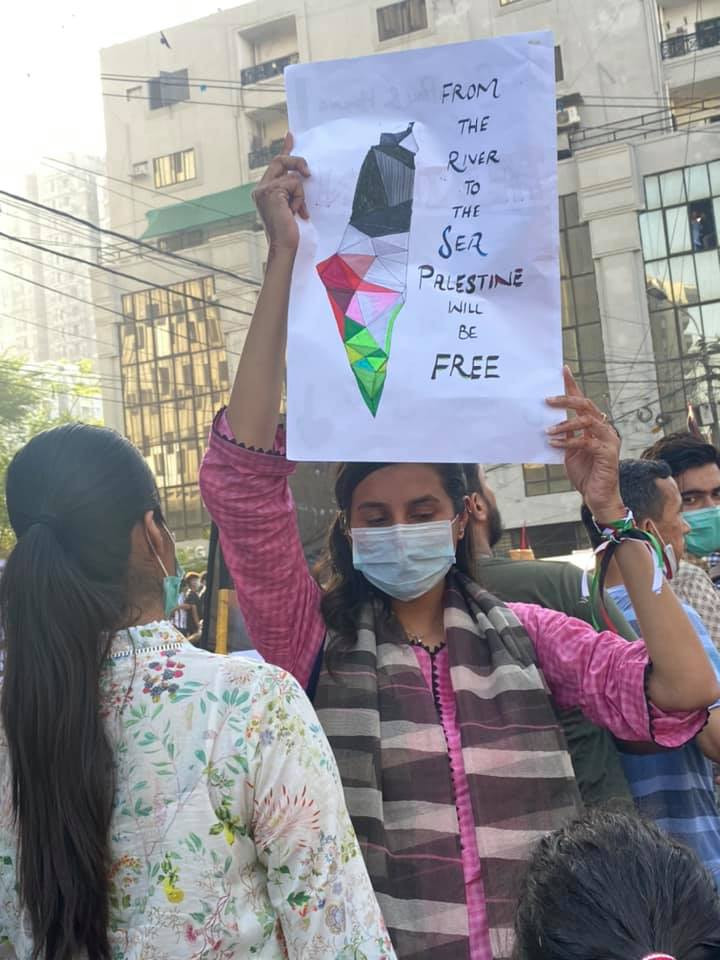 Call It What It Is - A Genocide

Many protesters highlighted the United Nations Security Council's silence over the brutal killings of innocent children and its failure to agree on a joint statement of concern. “How is killing civilians, especially children, not a war crime?” asked 18-year-old Mehwish* whose placard read ‘This is not a conflict, it is genocide'. 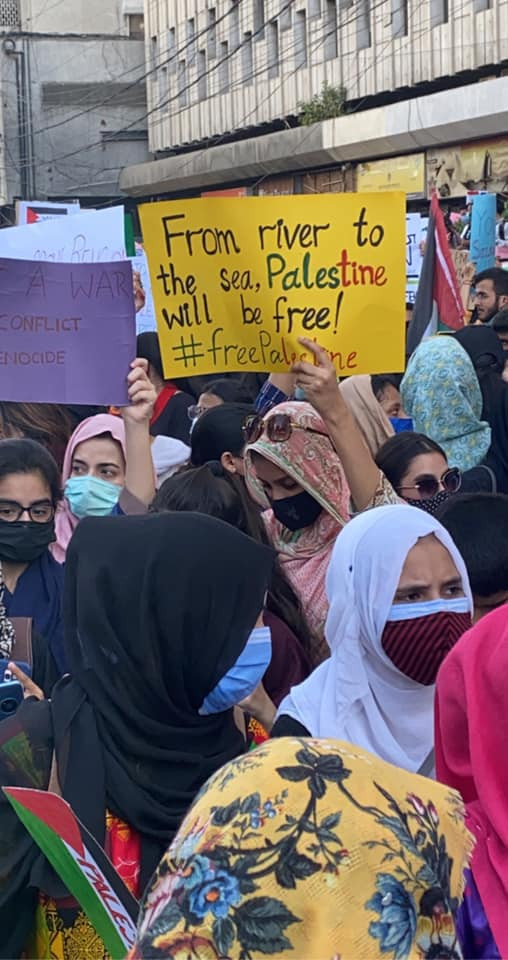 Speaking to the Express Tribune, one of the chief campaigners, Obaid Akhter, said people need to step out of their homes and raise their voices to show support for Palestinians whose homes are being bombed.

“My motivation behind helping with this protest is to spread awareness on the Palestinian cause,” he said. 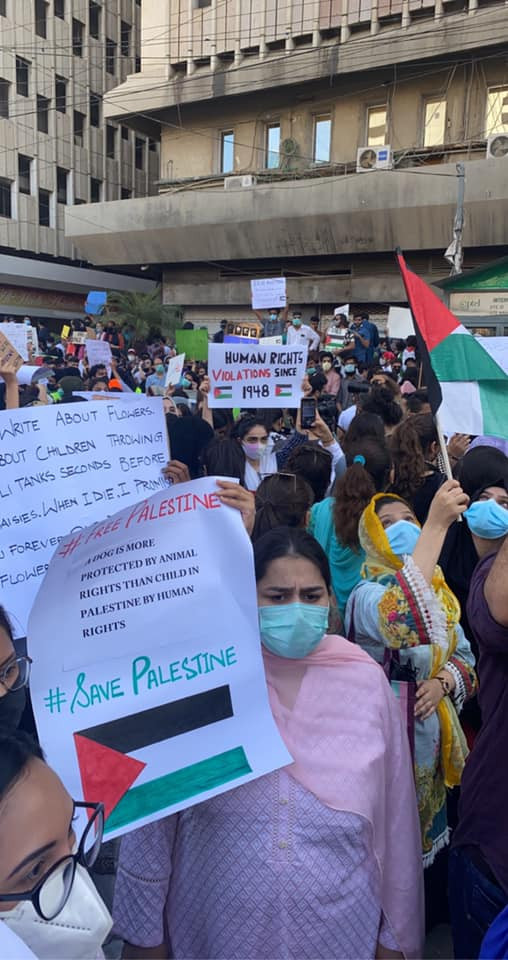 “I have been following the news, but the reality is what social media is showing. Videos of innocent people dying, of children being stuck under the debris of their own homes - how can anyone be at peace after watching something like that?” he added. “This is not about religion at all. It is a humanitarian issue.”

“We are here for a democratic Palestinian state that is free from Zionist supremacy,” said Hamza Harris. “This is a social revolution.”

“I am here because this is the worst week of violence in Gaza since 2014,” said a campaigner wearing a keffiyeh. “I am here to call for a unified approach. Enough is enough,” she added. 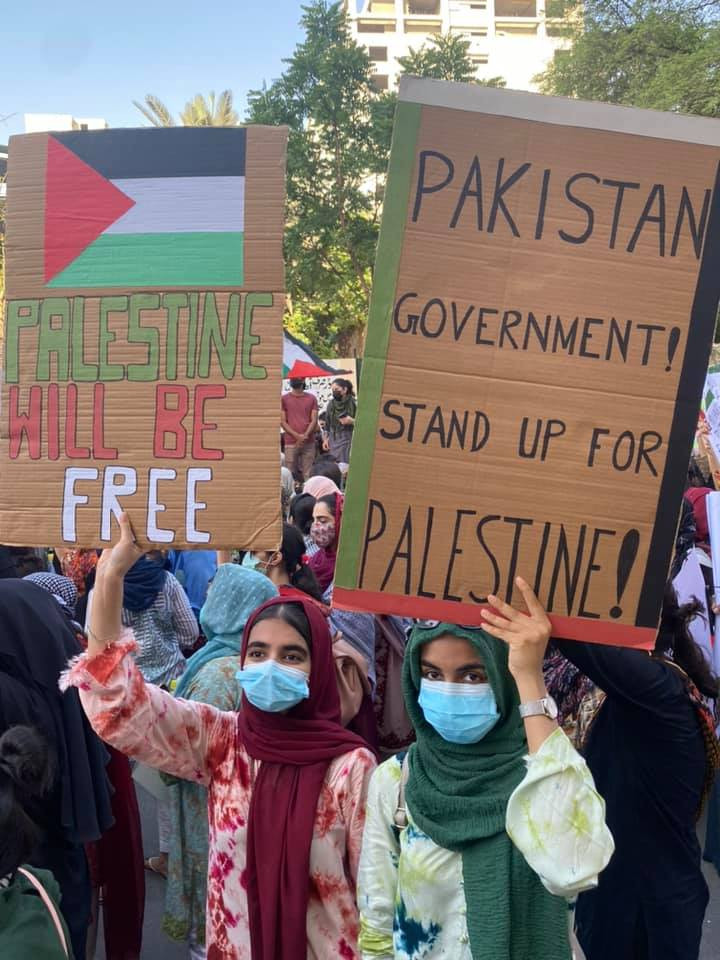 While Israel has been guilty of settler colonialism for over 70 years, matters escalated earlier this month with the Sheikh Jarrah evictions.

This was followed by ‘clashes' between Palestinians and Israeli settlers and a subsequent attack by Israeli forces on the Al-Aqsa Mosque in Jerusalem.

On May 9, the Israeli police stormed the Al Aqsa Mosque - the third holiest site for Muslims all over the world. They attacked

Palestinians inside and around, firing stun grenades, tear gas, and rubber bullets at worshippers. In retaliation to this, Palestinians threw stones.

After eight consecutive days of Israeli aggression, nearly 200 Palestinians in Gaza have been killed. These include at least 61 children and 35 women. 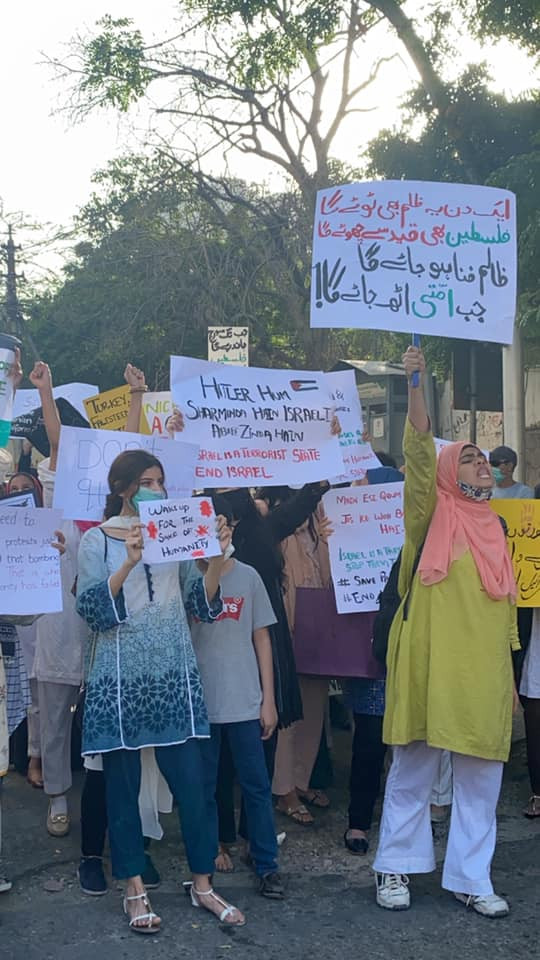 The protest in Karachi comes two days after students from Progressive Students' Collective (PSC) and Lahore University of Management Sciences (LUMS) held a demonstration at Liberty Chowk in Lahore.

A large number of people also rallied at Islamabad's famous D-Chowk roundabout to express solidarity with the Palestinians.

The first wave of international pro-Palestine protests erupted earlier this week in the United States of America, the United Kingdom, Turkey and Canada, coinciding with the 73rd Nakba Day.

Nakba [catastrophe] Day, observed on May 15 each year, marks the beginning of violence against Palestinians when 700,000 Palestinians were forced out of their homes and homeland in 1948 so the state of Israel could be created.

The Palestinian refugee crisis is the world's longest-running and the largest. Approximately one in every three refugees worldwide is Palestinian.

Motorcade rally taken out in support of Palestine