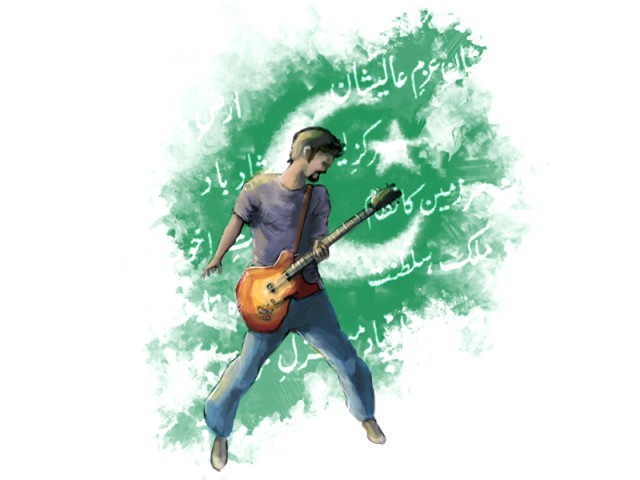 As a Pakistani, no matter where you are, the sight of the country’s green flag or the sound of its national anthem instantly connects you to the homeland. The beats of drums followed by a marching rhythm with trumpets stimulate deep feelings of patriotism as the words “Pak sarzameen shaad baad” resonate in your ears.

Composed by Ahmed Ghulam Ali Chagla, the lyrics of Pakistan’s national anthem were written by the subcontinent’s renowned poet Hafeez Jalandhari. The anthem is unique in that its music preceded its lyrics, which are written in Persian.

Head of music department at the National Academy of Performing Arts (Napa) and a sitar player, Ustad Nafees Ahmed gives his perspective on the overall structure of the anthem.

“The national anthem is the highlight of Chagla Saab’s career as a musician. The high and low notes of the composition make it unique; making it flow and sound like an anthem, instead of a song,” says Ahmed. However, the artist believes that the lyrics do not merge perfectly with the composition: “It is a little surprising that the music was composed before the lyrics were written, because generally the composer and the lyricist work together on the song. Hence, some parts of the anthem sound a little odd.”

According to Ahmed, “The line ‘Pak sarzameen ka nizaam’ is the point where the anthem gets really sad and mellow — which is an intelligent technique used by the composer as it gives breathing space to the singer after a number of high notes.”

Ahmed feels that the very line also has a sarcastic undertone: “Whenever I listen to it, I feel the writer was being sarcastic about the ‘nizam’ of this country, because a very important line about the system of our country comes at a very mellow point in the song. He may have seen it coming.”

While the veteran is critical of a few parts of the anthem, the young generation of musicians has an emotional connection with it.

“The most important thing about the national anthem is its lyrics. It has a very profound effect on the listeners, leaving them spellbound,” says Ahmed Ali Butt from Entity Paradigm (EP). The band that incorporated the closing words of the national anthem “Saae Khudae Zuljalal” in its latest song “Shor Macha”, Butt believes that this verse is the crux of the whole anthem.

“The interesting thing about our anthem is that it is based on a totally western-classical melody. As soon as you close your eyes it takes you through a narrative of our country, which like the melody of the song has been through a lot of highs and lows,” says Ahsan Iqbal, an up and coming musician and a faculty member at Neem Tree School of Music in Karachi.

Despite considering the anthem to have perfect lyrics and composition, Butt looks forward to a chance of further enriching it: “I would get all the celebrities, sportsmen and everyone who has made us proud and sing the national anthem with them. Obviously I won’t redo the composition because people have an emotional connection with it, but I will bring in the elements of our traditional folk music, just to revise the old version of the great anthem.”

The age of terror