The pre-dawn attacks were on houses in the centre of Gaza City, health officials said. A spokesman for the Israeli military said he would look into these reports.

The death toll in Gaza jumped to 181, including 52 children, since the fighting erupted last Monday. In Israel, 10 people including two children have been killed in rocket attacks by Hamas and other groups.

With no sign of an end to the worst outbreak of Israeli-Palestinian violence in years, the United Nations Security Council was due to meet later on Sunday to discuss the situation.

Both Israel and Hamas said they would continue their cross-border fire after Israel destroyed a 12-storey building in Gaza City on Saturday that housed the US Associated Press and Qatar-based Al Jazeera media operations.

The Israel military said the al-Jala building was a legitimate military target, containing Hamas military offices, and that it had given advance warnings to civilians to get out of the building.

The AP condemned the attack, and asked Israel to put forward evidence. "We have had no indication Hamas was in the building or active in the building," it said in a statement.

In what Hamas called a reprisal for Israel's destruction of the al-Jala building, Hamas fired 120 rockets overnight, the Israeli military said, with many intercepted and around a dozen falling short and landing in Gaza.

Israelis dashed for bomb shelters as sirens warning of incoming rocket fire blared in Tel Aviv and the southern city of Beersheba. Around 10 people were injured while running for shelters, medics said. 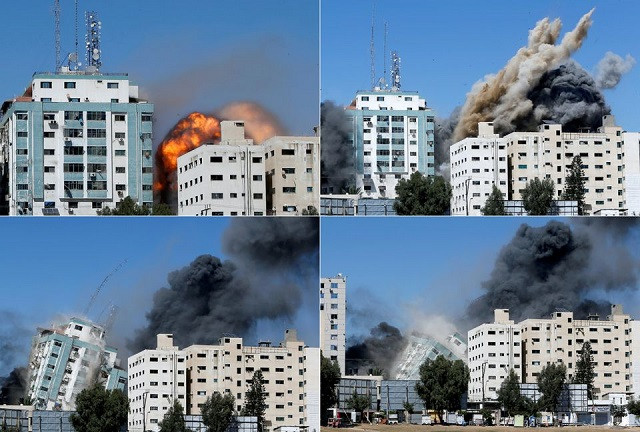 In a burst of air strikes early on Sunday, the Israeli military said it struck the home of Yehya Al-Sinwar in the southern Gaza City of Khan Younis. Sinwar, who was released from an Israeli prison in 2011, heads the political and military wings of Hamas in Gaza.

Palestinians working to clear rubble from a building wrecked in Sunday's air strikes recovered the bodies of a woman and man.

"These are moments of horror that no one can describe. Like an earthquake hit the area," said Mahmoud Hmaid, a father of seven who was helping with the rescue efforts.

Across the border in the Israeli city of Ashkelon, Zvi Daphna, a physician, whose neighbourhood has been struck by several rockets, described a feeling of "fear and horror".

Israel's security cabinet was due to meet later Sunday to discuss the hostilities. Prime Minister Benjamin Netanyahu said in a televised address late on Saturday that Israel was "still in the midst of this operation, it is still not over and this operation will continue as long as necessary". 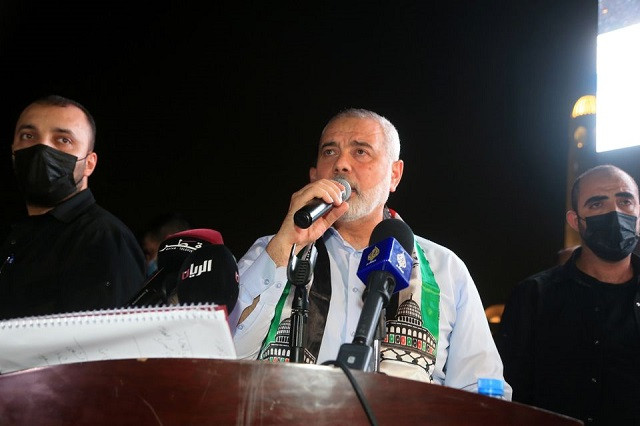 Palestinian group Hamas' top leader, Ismail Haniyeh speaks during a protest to express solidarity with the Palestinian people amid a flare-up of Israeli-Palestinian violence, in Doha, Qatar May 15, 2021. PHOTO: REUTERS

Hamas began its rocket assault on Monday after weeks of tensions over a court case to evict several Palestinian families in East Jerusalem, and in retaliation for Israeli police clashes with Palestinians near the city's Al-Aqsa Mosque, Islam's third holiest site, during the holy month of Ramazan.

Israel claims all of Jerusalem as its capital, a status not generally recognised internationally. Palestinians want East Jerusalem - captured by Israel in the 1967 Arab-Israeli war - as the capital of a future state.

Hamas and other groups have fired more than 2,000 rockets from Gaza since Monday, the Israeli military said on Saturday.

Israel has launched more than 1,000 air and artillery strikes into the densely populated coastal strip, saying they were aimed at Hamas and other militant targets.

UN Secretary-General Antonio Guterres reminded all sides on Saturday that "that any indiscriminate targeting of civilian and media structures violates international law and must be avoided at all costs,” UN spokesman Stephane Dujarric said in a statement.

There has been a flurry of US diplomacy in recent days to try to quell the violence.

n Israel, the conflict has been accompanied by violence among the country’s mixed communities of Jews and Arabs, with synagogues attacked and Arab-owned shops vandalised.

There has also been an upsurge in deadly clashes in the occupied West Bank. At least 15 Palestinians have been killed by Israeli troops in the West Bank since Friday, most of them during clashes. 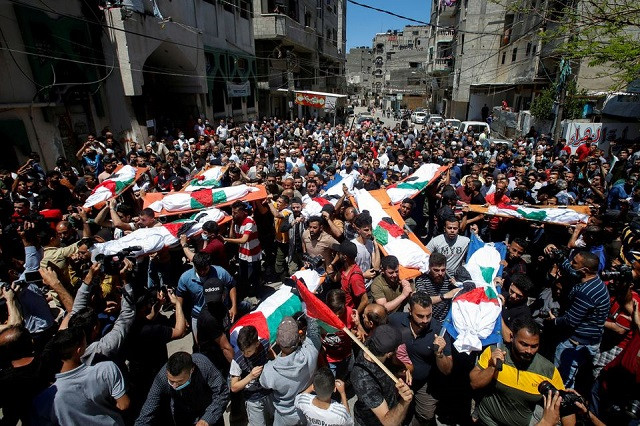 Mourners carry the bodies of Palestinians, including members of Abu Hatab family, who were killed amid a flare-up of Israeli-Palestinian violence, during their funeral at the Beach refugee camp, in Gaza City May 15, 2021. PHOTO: REUTERS