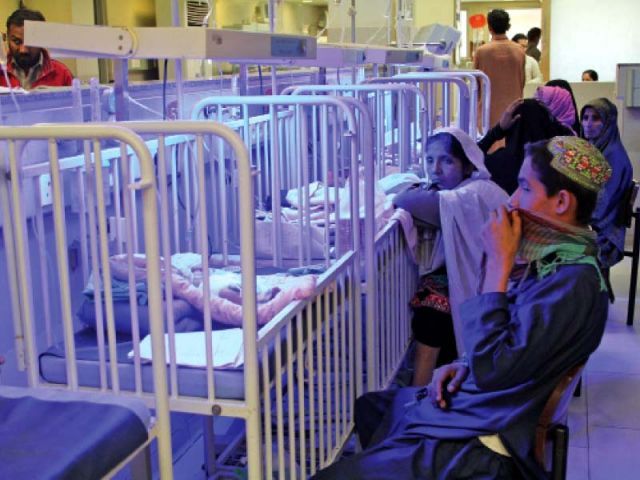 Nine more people have died from the novel coronavirus in Rawalpindi while another 598 positive cases have been reported in the twin cities during the last 24 hours.

Two patients succumbed to the virus at the Holy Family Hospital (HFH), two at the Benazir Bhutto Hospital (BBH), and five at the Rawalpindi Institute of Urology and Kidney Liver Transplant (RIUKT).

Some 178 patients are receiving treatment in these hospitals and among them, 139 are on oxygen support, and three have been put on ventilators.

Owing to the rapid increase in patients depending on oxygen support, the system is under pressure. A day ago, nine people had lost the battle to the deadly virus in Attock.

Another 171 more Covid cases were reported in Rawalpindi during the last 24 hours, raising the tally of confirmed cases to 23,985 in the district.

According to the District Health Authority, among the new cases, 44 were reported from Rawal Town, 35 from Potohar Town, 46 from Rawalpindi Cantt, nine from Taxila, 17 from Gujar Khan, two from Kalar Syeda, seven from Murree, two from Abbottabad and one each from Kotli Sattian, Kahutta, Attock, Jehlum and Chakwal.

"At present, 168 confirmed patients are admitted to various city facilities: 29 at the Holy Family Hospital, 29 in the Benazir Bhutto Hospital, 84 at the Institute of Urology, 20 at the Fauji Foundation Hospital, five at the Hearts International and one at the Akhtar Rukhsana Memorial hospital," the health authority report said.

Meanwhile, authorities said 427 new cases of coronavirus had been reported from the federal capital during the last 24 hours.

He added that 61,785 patients had been recovered completely. Commenting on the present coronavirus situation, he said the government had taken appropriate measures and tightened restrictions to curb the virus spread.

He said the government was closely monitoring the third wave situation and it may place more areas under lockdown if other interventions did not work in the next few days.

The Rawalpindi health department has increased the number of vaccination centres from three to six as the infection rate in the district surges to 10.17 percent.

Despite the climbing infection rate, the citizens of Rawalpindi are still defying all precautionary guidelines in public places.

The health experts said that infected patients were not making any substantial recovery from the drugs they are being administered. The percentage of patients dying despite getting moved on ventilators is also increasing, they added. The doctors are also using vent-base C-pipe on the infected patients to make their lungs function at a better capacity.

Further, District Health Authority (DHA) Chief Executive Officer (CEO) Dr Fouzia Kanwal told The Express Tribune that they had spurred the vaccination process to protect the masses against the pathogen.

She added that some 110,000 people have been inoculated against Covid-19 in the Rawalpindi district so far.