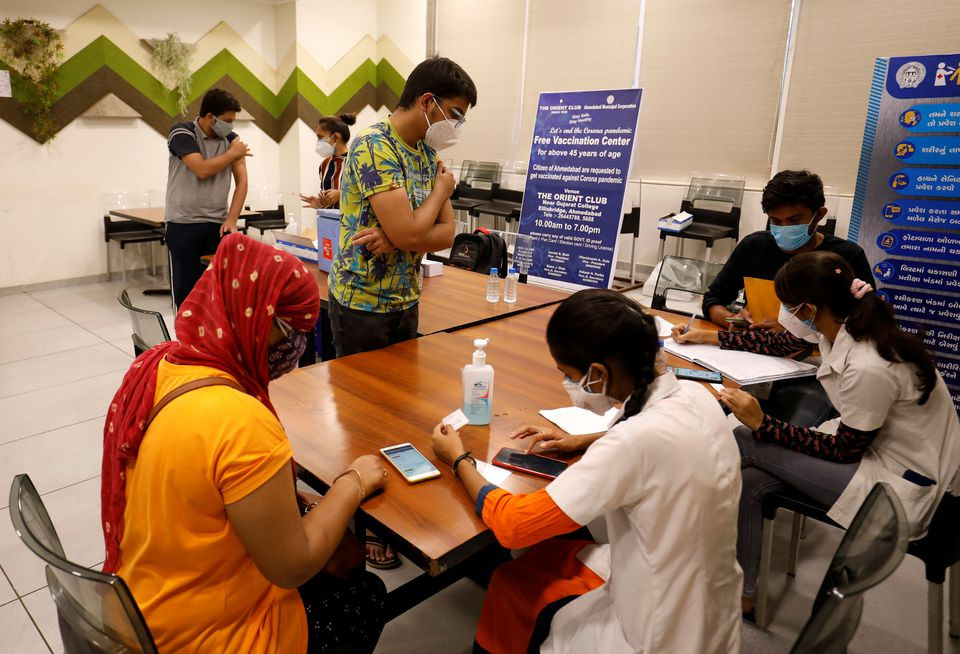 People get their names registered after receiving a dose of COVISHIELD, a coronavirus disease (Covid-19) vaccine manufactured by Serum Institute of India, at a vaccination centre in Ahmedabad, India, May 1, 2021. PHOTO: REUTERS
NEW DELHI:

A forum of scientific advisers set up by the Indian government has told authorities about minor mutations in some samples of the coronavirus that could "possibly evade immune response" and require more study, a leader of the forum has told Reuters.

However the advisers said while they were flagging the mutations, there was no reason currently to believe they were expanding or could be dangerous.

Scientists are studying what led to the current surge in cases in India and particularly whether a variant first detected in the country, called B.1.617, is to blame. The World Health Organisation has not declared the Indian variant a "variant of concern," as it has done for variants first detected in Britain, Brazil and South Africa. But the WHO said on April 27 that its early modelling, based on genome sequencing, suggested that B.1.617 had a higher growth rate than other variants circulating in India.

The forum of advisers, known as the Indian SARS-CoV-2 Genetics Consortium, or INSACOG, has now found more mutations in the coronavirus that it thinks need to be tracked closely.

"We are seeing some mutation coming up in some samples that could possibly evade immune responses," said Shahid Jameel, chair of the scientific advisory group of INSACOG and a top Indian virologist. He did not say if the mutations have been seen in the Indian variant or any other strain.

"Unless you culture those viruses and test them in the lab, you can't say for sure. At this point, there is no reason to believe that they are expanding or if they can be dangerous, but we flagged it so that we keep our eye on the ball," he said.

India reported more than 400,000 new Covid-19 cases for the first time on Saturday. The rampaging infections have collapsed its health system in places including capital New Delhi, with shortages of medical oxygen and hospital beds.