Pinot scratches from Giro as back problems persist

In view of the third wave of coronavirus in Pakistan, fuelled by the UK variant, the Punjab government on Saturday ordered the closure of colleges in 25 districts of the province.

It said that colleges have been closed in districts where the coronavirus positivity ratio is over five per cent.

Universities in these districts will continue their educational activities as per the SOPs issued by the Higher Education Commission, the notification further read.

According to the National Command and Operations Centre (NCOC), the country recorded at least 5,908 new coronavirus cases during the same time period, taking the country's Covid-19 tally to 790,016.

The country is witnessing a surge in Coid-19 cases as it grapples with the third wave of the pandemic, fuelled by the UK strain of the virus.

According to the NCOC, the country's death toll climbed to 16,999, with most deaths occurring in Punjab followed by Khyber-Pakhtunkhwa (K-P).

The highest ventilator occupancy rate in the country is in Gujranwala at 88 per cent, followed by Multan with 85 per cent occupancy, Lahore at 83 per cent and Mardan at 60 per cent.

The NCOC further reported that the highest oxygen bed occupancy was also witnessed in Gujranwala at 85 per cent followed by Peshawar at 77 per cent, Swabi at 71 per cent and Mardan at 68 per cent. 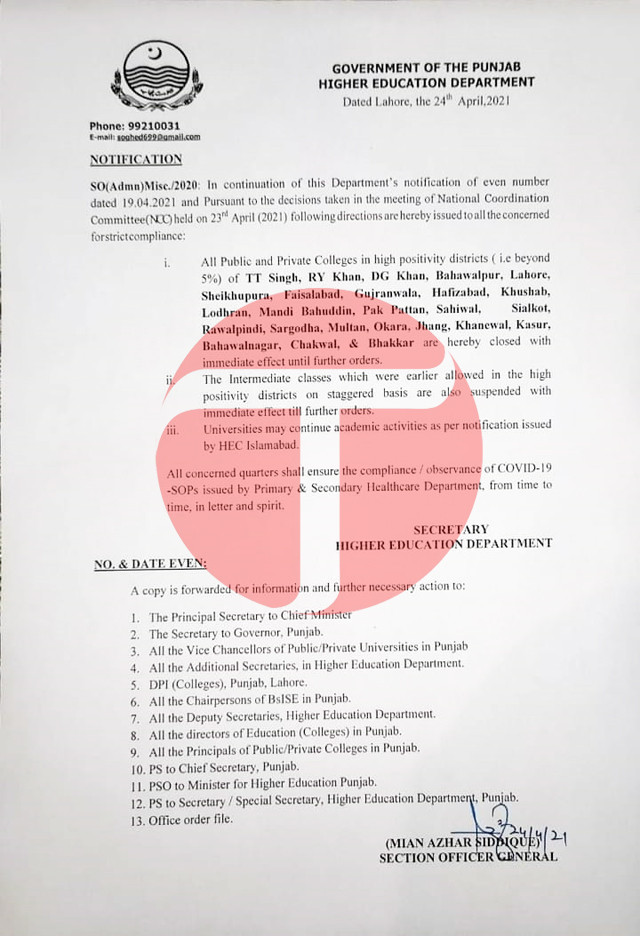 ‘No chance of school-assessed grades’