Foreign minister says Pakistan is ready to talk to India if it reverses its illegal steps of August 5, 2019 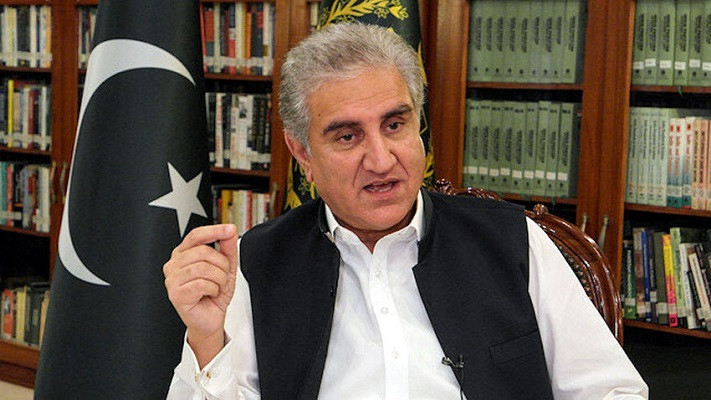 Foreign Minister Shah Mahmood Qureshi on Sunday ruled out backchannel talks between Islamabad and New Delhi, saying he was not scheduled to meet his Indian counterpart, Dr S Jaishankar.

"I am here for a bilateral visit and not an India-specific agenda. My agenda is UAE-Pakistan and not India-Pakistan,” he told the media in Dubai, a day after reaching the UAE on a three-day visit, putting an end to speculations triggered by New Delhi's announcement that its external affairs minister would also be in the Gulf nation for a day.

“I don’t think a meeting is set out with the Indian foreign minister,” he added.

The minister further said Islamabad had never shied away from addressing problems through dialogue.

“We are ready to hold talks with New Delhi if the latter reviews  its decision to revoke the semi-autonomous status of Indian Illegally Occupied Jammu and Kashmir (IIOJK),” he added.

“We want peace in the region and cordial ties with all our neighbours including India.”

The minister welcomed the UAE’s mediation in resolving Pakistan’s issues with India.

“We welcome third-party facilitation but no matter what friends say, the initiative has to be indigenous,” he added.

“They can be suggestive and facilitators but, ultimately, it is the people of South Asia who have to decide what kind of future they visualise.”

The foreign minister said  friends generally, including the UAE, had always said the two countries should sit and resolve issues through dialogue.

“India has always been hesitant of a third-party mediation. We have always welcomed it and were never shy of it.”

The invitation was extended during a telephonic conversation held between the two foreign ministers.

During the conversation, the two leaders also discussed the progress made so far on the Afghan peace process.

Qureshi and his counterpart also exchanged felicitations for the month of Ramazan.

Speaking to the Afghan minister, Qureshi maintained that a peaceful, stable Afghanistan was in the interest of Pakistan, adding that the country wished for a reduction in violence in the war-torn country.

Qureshi further said that Pakistan was a partner in the efforts for peace in the region and committed to continue its conciliatory assistance to make Afghanistan peaceful and stable.

The foreign minister hoped that the "Istanbul Process" would help make the Doha Agreement successful in its efforts to establish lasting peace in Afghanistan.

Speaking at an Iftar dinner hosted by the Pakistan Business Council in Dubai, Qureshi said it was a matter of satisfaction that despite the ill effects of the global coronavirus pandemic, Pakistan had achieved positive results through its economic diplomacy.

He said the government with its economic diplomacy had successfully attracted the world towards the business opportunities available in Pakistan.

The foreign minister assured that welfare and resolution of the problems being faced by expatriate Pakistanis were among the top priorities of the incumbent government.

He said it was a matter of pleasure that a huge number of Pakistanis were residing in the UAE and playing a positive role in the development and progress of the country.

Qureshi stated that the aim of his visit was to promote trade relations between Pakistan and the UAE in multiple fields.

The moment Qureshi landed in the Gulf country, the Indian government announced that its external affairs minister would be in Abu Dhabi for a day trip on April 18, setting off speculations the top diplomats may meet as part of efforts to seek rapprochement.

The UAE ambassador to Washington also confirmed that his country was facilitating dialogue between the two countries. The envoy said the idea behind the UAE’s effort was to ensure that Pakistan and India had a functional relationship.