The government could recover a meagre $30 million (Rs4.6 billion) out of cases of billions of dollars referred by the Organisation for Economic Cooperation and Development (OECD), prompting a state institution to launch probe into complaint of malpractices.

Average tax recovery in 1,150 cases by three zones was just Rs4 million or $25,800 per case owing to poor performance of the Karachi Zone of the Federal Board of Revenue (FBR), according to official documents seen by The Express Tribune. The official record shows that progress on thousands of offshore tax evasion cases was painstakingly slow despite Prime Minister Imran Khan’s declaration that the recovery of stolen and tax-evaded offshore money was his high priority.

The official record showed that the FBR headquarters forwarded Rs260 billion or $2 billion worth of nearly 1,580 cases to three Automatic Exchange of Information (AEOI) zones of Karachi, Lahore and Islamabad. The recoveries in about 1,150 cases were a mere Rs4.6 billion or $30 million as of last month, according to data compiled by the FBR headquarters.

PM Khan had promised to recover the $200 billion worth of looted money. But the Directorate General of International Taxes remains a neglected wing in the FBR, which has no permanent director general for the last almost one year. Asad Umar, now the planning minister, had repeatedly termed the “recovery of assets stashed abroad” a high priority of the prime minister.

The official record suggested that the performance of Karachi zone was very poor amid complaints of striking deals with the people who had offshore assets, highly placed sources told The Express Tribune.

They said that the matter had also been brought to the notice of former finance minister Dr Abdul Hafeez Shaikh.

Due to complaints of “malpractices with corrupt motives”, the Federal Tax Ombudsman (FTO) office has taken a suo motu notice and launched probe to determine as to why the FBR’s three field offices were failing the prime minister and the nation. FTO is a state organ that is responsible for checking corrupt practices and maladministration in the FBR.

FTO on Wednesday served a notice on the FBR, directing it to nominate officials for inspection of the three zones. Sources said that the FTO had ordered the inspection of all the three offices on complaints of malpractices with corrupt motives in the discharge of duties, falling within the ambit of maladministration.

To make the investigation transparent, the inspection team will comprise two officers - one each from the FBR and the FTO.

Section 9 of the FTO Ordinance empowers the FTO to investigate, on his own motion, any allegation of maladministration on the part of the Revenue Division or any tax officials.

The FBR record showed that the headquarters handed over 1,580 cases to the three zones, having value of Rs260 billion.

They worked out the taxable amount at only Rs53 billion. Out of this sum, they made Rs14 billion worth of tax assessments and collected only Rs4.6 billion, so far in 1,150 cases. About 430 cases still remain pending before these offices for a decision. The lowest taxable amount assessment was made by the Karachi zone, which was just 15% of total value of the cases referred to the Karachi zone.

The Lahore zone assessed the value of the taxable amount at 27% and Islamabad zone at 29% of the referred cases. 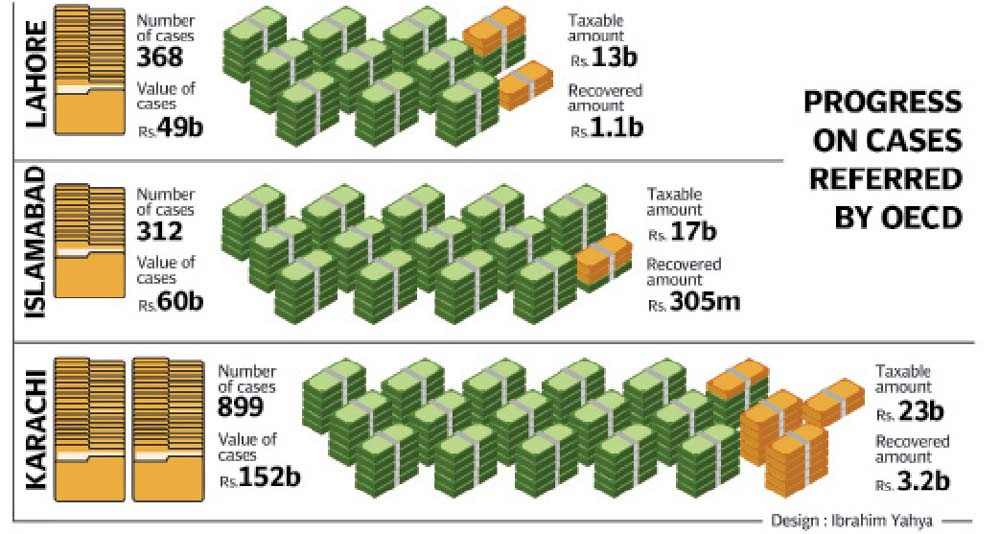 The AEOI zone Karachi is headed by Commissioner Shakeel Kasana, The FBR had referred nearly 900 cases worth Rs152 billion or $1.5 billion to the Karachi zone for recoveries. In its opinion, only Rs23 billion was taxable in these cases. In 624 cases, the Karachi zone made Rs5.1 billion tax demands and recovered only Rs3.2 billion. About 275 cases remain pending in the Karachi zone.

The FBR had referred 368 cases to Lahore zone having cumulative value of roughly Rs49 billion. According to the official record, the Lahore zone determined the taxable value at Rs13 billion or 27% of the total value. It made assessment orders worth Rs4 billion and has so far recovered Rs1.1 billion. About 82 cases still remain pending in Lahore zone.

The FBR headquarter handed over 312 cases to the Islamabad zone worth Rs60 billion. The taxable amount has been worked out over Rs17 billion or 29% of the referred cases. The zone has made tax demands to the tune of Rs5.1 billion and has so far recovered Rs305 million. There are 74 cases that are still pending before Islamabad zone.

An FBR official said that the reasons for recoveries lower than the referred value were mis-declarations, joint accounts resulting into duplications and the details of non-resident Pakistanis who are not taxable in Pakistan.

Pakistan had received the first batch of information from OECD in September 2018 - a month after the PTI came into power - but the agreement had been signed during the tenure of the Pakistan Muslim League-Nawaz (PML-N) government. The then Minister of State for Revenue Hammad Azhar had tweeted that the OECD shared information of 152,000 accounts worth $7.5 billion.

The Express Tribune had first sent questions to the FBR on December 16, 2020, about the fate of the OECD information. The reminders were given in February and then again on this Monday. No reply was received from the FBR.

The FBR spokesman had been requested to comment how much of the $7.5 billion has been recovered, details of zone-wise tax demands and the value of the information that the OECD shared in October 2019 in second batch.