Devotees gather to take a holy dip in the waters of river Ganges during Kumbh Mela, or the Pitcher Festival, amidst the spread of the coronavirus disease (Covid-19), in Haridwar, India, April 12, 2021. PHOTO: REUTERS

India reported a record daily tally of 168,912 Covid-19 infections on Monday, the world’s highest, while worries grew over a further spike, as hundreds of thousands of devotees gathered for a ritual bath in the Ganges river.

India now accounts for one in every six daily infections worldwide. Monday’s new cases carried it past Brazil, for an overall tally of 13.53 million, data compiled by Reuters shows, placing it second after the United States, with 31.2 million.

In the northern city of Haridwar, nearly a million devotees thronged the banks of the Ganges, a river many Hindus consider holy, to join in the months-long ‘Kumbh Mela’ or pitcher festival, risking a surge in infections.

Few wore masks as they jostled for a dip in the waters on a day considered auspicious in the Hindu calendar.

Authorities have made virus tests mandatory for those entering the area, where officials said they were battling to hold back crowds.

Elections are also due in four big states this month, with Prime Minister Narendra Modi set to travel to the eastern state of West Bengal to address rallies that will draw thousands.

“With 1.2 million active cases, and the daily number reaching 200,000, it’s bizarre to have poll rallies and a full Kumbh Mela,” political commentator Shekhar Gupta said in a Twitter post.

“This will take the virus deeper into villages and small towns. This is the calamity we dodged with a crippling lockdown in the first wave. Now we’re inviting it back.” 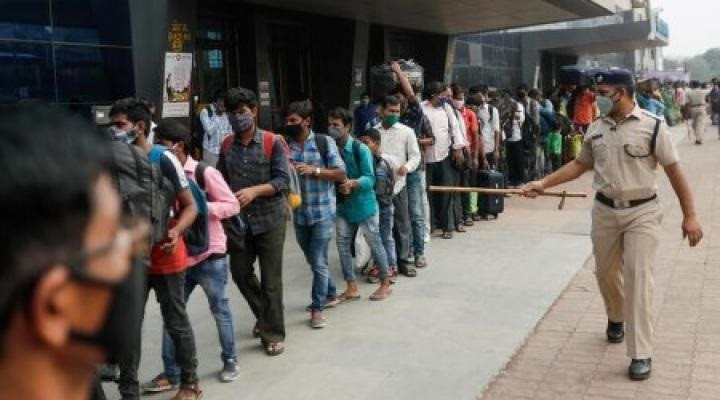 A police officer points at people in line at a railway station amidst the spread of the coronavirus disease (Covid-19) in Mumbai, India, April 11, 2021. PHOTO: REUTERS

Officials in the worst-hit state of Maharashtra, home to the financial capital of Mumbai, said they were considering a broader lockdown after large closures over the weekend.

The state, India’s industrial powerhouse, tallied 63,294 new infections on Sunday, led by a surge in its key cities of Mumbai, Nagpur and Pune.

“It is necessary to break the cycle (of infections),” said a senior state official who attended a meeting with state leaders on Sunday and sought anonymity.

“We are working on identifying industries and services that need to be exempted.”

The state is among many that have demanded more doses of vaccines for immunisation campaigns. India has injected more than 100 million doses since mid-January, the highest figure after the United States and China, but much lower as a share of its population than many countries.

As cases have climbed, India has banned the export of anti-viral drug remdesivir and its active ingredients, which doctors have used to treat patients. 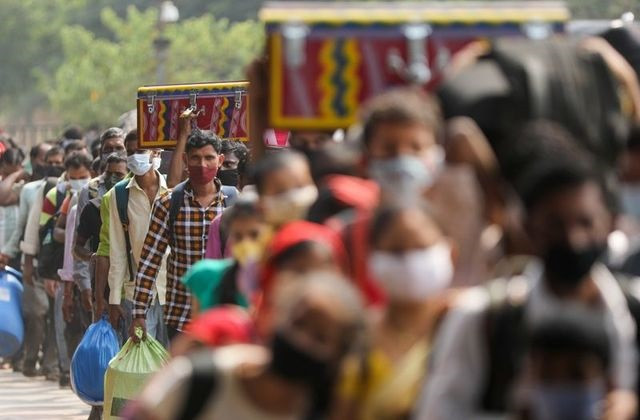 People wearing protective masks wait in a line at a railway station amidst the spread of the coronavirus disease (Covid-19) in Mumbai, India, April 11, 2021. PHOTO: REUTERS