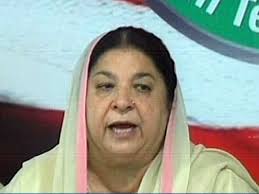 The Punjab Healthcare Commission (PHC) on Saturday sealed the operation theatre of a private hospital for allegedly causing serious eye infections and vision problems among its patients.

Reportedly, as many as 16 persons who were treated at the private health facility developed eye infections and vision problems due to alleged negligence during their treatment procedures.

According to a spokesperson for the PHC, these 16 patients developed the eye problems after treatment at Laeeq Rafique Hospital in Basti Malook, Adda Laarh, Multan.

After the eye problem cases were reported, Punjab Health Minister Dr Yasmin Rashid had ordered the PHC to send an inquiry committee to Multan immediately to probe the issue.

The four-member PHC team confiscated the hospital’s treatment records and also recorded the statements of doctors. The spokesperson for the PHC further said that the health commission would take strict legal action against those found guilty upon completion of the inquiry.