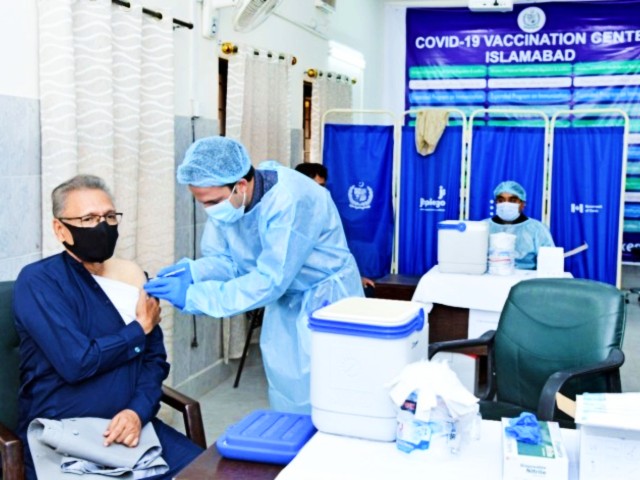 President Dr Arif Alvi and First Lady Samina Alvi on Monday got their anti-Covid vaccine in Islamabad with the former urging the nation to take precautions to make the country sail through the third wave of the pandemic.

The president and the first lady arrived at the vaccination centre at Tarlai after they received the intimation from the 1166 registration service where the duo had registered themselves on February 15.

Talking to the media, the president said the elite across the world had been breaking the queue to get vaccinated but in Pakistan, the government had put in place an efficient mechanism for vaccination of the people on their turn.

“I think the vaccine gives further protection but we will have to take precautions of wearing masks, washing hands and social distancing unless the world fully overcomes the pandemic. Allah knows till how long we will have to do this,” he said.

Calling the Covid-19 a deadly disease, President Alvi said it affected the elderly more than others and it could only be tackled through precautions.

The president said he found the system very easy and viewed that the mechanism of calling the people proactively had also avoided crowd at the centre, though the government had sufficient stock of the medicine available.

He said the vaccination was never meant to do away with the precautionary measures rather it was meant to give further protection.

President Alvi recalled that Prime Minister Imran Khan was the only leader who had resisted the call of blanket lockdown by all including experts but he went for smart lockdown just to avert the hunger-related deaths. "The idea was later endorsed globally by many others."

He added that the country kept the mosques opened and also observed Eid festivals with precautions and recognised the sacrifices by doctors.

“Pakistan’s success is that… We fought the first wave, the second one and it is also essential to fight the third wave. The precaution is direly needed. Keep wearing mask. Pakistan will bring it under control,” he hoped.