India's richest state has half of new, active coronavirus cases

Opposition alliance will reveal 'all the details' if same tactics are used in election of Senate chairman, says Fazl 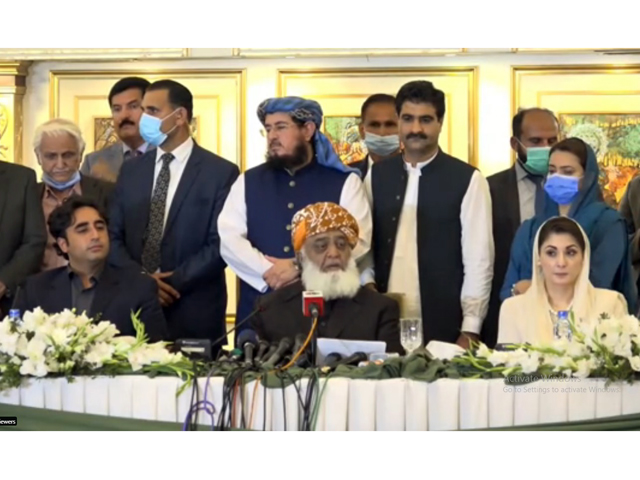 The 11-party opposition alliance – the Pakistan Democratic Movement (PDM) – while officially declaring Yousuf Raza Gilani its candidate for the slot of Senate chairman -- has warned the establishment against any attempt to interfere in the polls for the key position, scheduled for March 12.

Addressing a news conference after a meeting of the PDM leaders on Monday, PDM President Maulana Fazlur Rehman said there is evidence that intelligence agencies violated the Election Commission of Pakistan’s (ECP) code of conduct and tried to influence the March 3 Senate polls by threatening and luring the voters.

“The PDM condemns the move and warns that if the same tactics are repeated during the election of Senate chairman and deputy chairman then the PDM would be compelled to present all the evidence before the public,” said Fazl.

The PDM president was flanked by a number of PDM leaders including Bilawal Bhutto Zardari and Maryam Nawaz, respectively, the top leaders of the PPP and the PML-N.

The PDM also managed to get its candidate Yousuf Raza Gilani elected at the crucial general seat of Islamabad, a contest in which he defeated the PTI’s Dr Abdul Hafeez Shaikh with five votes. This setback compelled Prime Minister Imran Khan to seek a trust-vote from the National Assembly on March 6.

In their news conference on Monday, the PDM leaders, however, condemned the establishment’s alleged interference in politics, alleging that the country’s intelligence agencies coerced lawmakers into voting for the ruling PTI candidates during the recently-held Senate elections.

The PDM leadership declared the National Assembly’s sitting called to get a vote of confidence for Prime Minister Imran Khan “illegal and unconstitutional”.

Commenting on the establishment’s alleged interference, Bilawal said the PDM demands that all the state institutions focus on their work and stay in their domain.  “It should be a permanent reality and not just an exception for a certain election.”

The PPP chief claimed that efforts are being made to remove Gilani from the race of Senate chairman.

“We hope that the ECP and the courts will decide judiciously and the government will fail in its efforts. This shows that the government has already lost in the election of chairman and deputy chairman Senate elections,” he added.

Maryam Nawaz said the nation is waiting for the show of hands for the election of Senate chairman, adding that the government does not have a numerical majority in the Senate.

“The government must be asked why it has nominated its candidate when it is in the minority. It only indicates that the government wants to use agencies or money to pressurize voters for elections of chairman and deputy chairman of the Senate,” she said.

Fazl described the ruling party’s decision to challenge the election of Gilani as a foolish move. He asked why the PM bothered to take the vote of confidence if the Senate election was rigged.

He said the lawmakers gave their decision and compelled PM Imran to take a vote of confidence from the assembly. “Such tactics will not stop the PDM’s quest for democracy,” he added.

Bilawal said the vote of confidence was sought because the ruling party accepted that Gilani won the election, adding that the ruling party knows that there is no way to stop the PDM from getting its candidates elected as Senate chairman and deputy chairman if free and fair elections are conducted.

“The government fears that it will lose the Senate elections and that is why it is trying to keep Gilani out of the race. I hope the ECP and courts would not allow any force to do this.”

To a question, Bilawal said the PDM will take all the decisions, including the decision to move a vote of no-confidence in Punjab Assembly with consensus.

The PPP chief said the PDM is following the action plan presented by it on September 20 last year in its first meeting and takes all decisions with consensus.

Talking about his recent meeting with the PML-Q leadership, Bilawal said he visited Chaudhry Shujaat Hussain to inquire after his health and visited PML-N’s Hamza Shehbaz because he was imprisoned for two years and “it was a courtesy call.”

The PDM chief also spoke about the incidents of violence outside the Parliament House on Saturday, where PML-N leaders were allegedly manhandled by the PTI workers.

“The PTI goons attacked them,” Maulana said, adding that not only were the PML-N leaders insulted and harassed, the “goons even disrespected Marriyum Aurangzeb”. “This is the culture the PTI is inculcating among its workers,” he lamented.

While Imran Khan may be honest and willing to bring change for the better he is surrounded mostly by incompetent people. But that does not mean Pakistanis are so desperate as to bring back those who never ever had Pakistan s interest at the core of their policies.