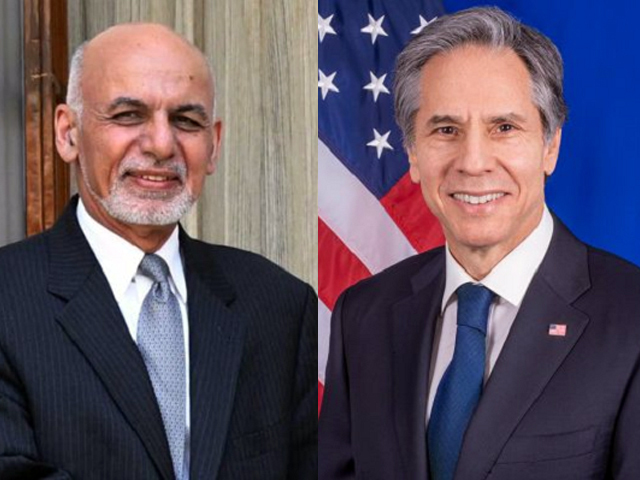 The Biden administration has presented a four-point strategy to the Afghan government, seeking an end to the war but with a chilling message that the absence of a peace deal may allow the Taliban to make “rapid territorial gains”.

The strategy was shared with Afghan President Ashraf Ghani and Head of the Afghan peace council Dr Abdullah Abdullah by US Secretary of State Antony Blinken.

He wrote letter to both leaders that were handed to them by US special envoy for Afghanistan Zalmay Khalilzad in his recent visit.

The letter shared by TOLOnews, an Afghan news outlet, suggested that the Biden administration wants to accelerate the peace efforts.

Although, the Biden administration has yet to complete a review of the Doha deal, the US Secretary of State said the US in its initial assessment concluded "the best way to advance our shared interests is to do all we can to accelerate the peace talks and to bring all parties into compliance with their commitments".

The Afghan leadership was informed that the US was launching a high-level diplomatic engagement with several countries including Afghan neighbours for this purpose.

As part of the four-point strategy, the US has proposed the UN-sponsored meeting of the foreign ministers of Iran, China, Russia, Pakistan and India to discuss the "unified approach" for the Afghan peace.

"It is my belief that these countries share an abiding common interest in a stable Afghanistan and must work together if we are to succeed," Secretary Blinken wrote.

The letter said Khalilzad was instructed to share specific proposals both with the Afghan government and Taliban to take the process forward.

These documents, as per the letter, would enable Afghan government and Taliban to move urgently to the task of developing (a) the foundational principles that will guide Afghanistan’s future constitutional and governing arrangements (b) a road map to a new inclusive government (c) the terms of a permanent and comprehensive ceasefire.

The US is asking Turkey to host the high-level talks between the Afghan government and the Taliban for peace agreement.

Expressing concerns over the increased level of violence, the letter said: "We have prepared a revised proposal for 90-day reduction in violence, which is intended to prevent the spring offensive by the Taliban to coincide with our diplomatic efforts to support a political settlement between the parties."

Secretary Blinken made it clear that these proposals were not meant to dictate terms to the parties but added the US expected a positive response from the Afghan government.

The Afghan side was also informed that the Biden administration had not ruled out any options at this stage. The letter went on to add that the US was considering full withdrawal from Afghanistan by May 1, the deadline set in the February 29, 2020 deal, as it pondered upon other options.

The letter concluded with a warning for the Ghani administration that the absence of deal may lead to the toppling of Afghan government by the Taliban.

"Even continuation of the financial assistance of the United States to your forces after the American military withdrawal, I am concerned that the security situation will worsen and the Taliban could make rapid territorial gains," the letter said.

Observers believe that this was clear warning for the Ghani administration, which sought extension in US troops stay and also has reservations over the possible interim set up.

"I am making this clear to you so that you understand the urgency of my tone regarding the collective work outlined in this letter," Secretary Blinken concluded.

Khalilzad, who held talks with Taliban in Doha on Friday, is expected to visit Islamabad soon to share the new push by the Biden administration for the Afghan endgame.