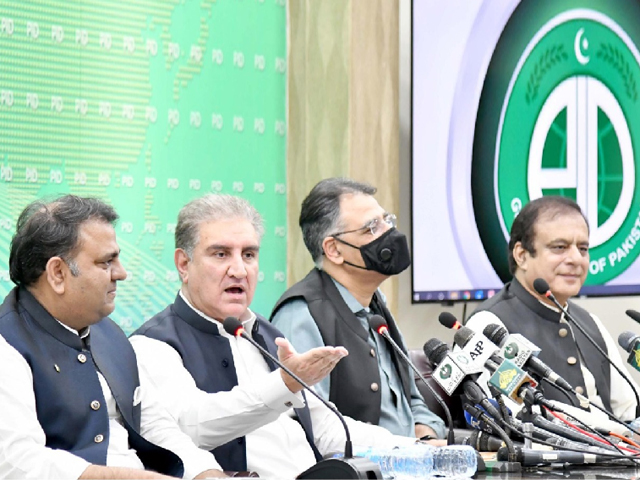 Foreign Minister Shah Mahmood Qureshi on Wednesday announced that Prime Minister Imran Khan would seek a confidence vote in the National Assembly in a counter move to limit the opposition’s ability to challenge legitimacy of his government.

Addressing a news conference along with federal ministers Shafqat Mehmood, Asad Umar, Shireen Mazari, Hammad Azhar and others, Qureshi described the victory of Syed Yusuf Raza Gilani on the general seat of the Senate from the federal capital as “negation of democracy”.

“The Pakistan Tehreek-e-Insaf (PTI) has unanimously decided that Prime Minister Imran Khan will seek a vote of confidence from the National Assembly,” Qureshi said, adding “Today was a sad day for democracy,”

He was referring to the defeat of PTI candidate Abdul Hafeez Sheikh to Gilani.

The foreign minister mentioned a video, which surfaced on Tuesday, in which Gilani’s son Ali Haider was seen telling someone how to waste the vote. After the video of Gilani’s son surfaced last night, his true self was exposed, he added.

“I regret to say that the Election Commission of Pakistan (ECP) failed to ensure transparency in the Senate polls,” he said. “The ECP was entrusted with a huge responsibility, but it [failed to deliver],” said Qureshi.

Taking a jibe at the opposition Pakistan Peoples Party (PPP), Qureshi said: “Those who claimed to be the champions of democracy have trampled upon it. [Corrupt] opposition leaders have come together [under the Pakistan Democratic Movement banner] to practice “the politics of escapism.”

Responding to a question, the foreign minister stressed that Prime Minister Imran always listened to the party members patiently. “If someone was upset, they should have openly left the party,” he said. “Prime Minister Imran Khan always takes a high moral ground when it comes to politics.”

Meanwhile, addressing the media in Peshawar, Information Minister Shibli Faraz said that Prime Minister Imran’s apprehensions about the Senate elections’ transparency proved correct, as evident from the result of election of the general seat for Islamabad.

Flanked by Khyber Pakhtunkhwa Minister Shaukat Yousufzai after the announcement of Senate election results, Faraz dubbed the victory of opposition’s candidate in the National Assembly the “outcome of the video leaked last night”.

Later in an interview with a private television channel, Faraz raised serious concerns over dubious role of Yusuf Raza Gilani, who won Senate seat “through unfair means”. Gilani didn’t have any moral ground to contest Senate elections after the video scandal of his son Ali Haider Gilani, he stated.

Yusuf Raza Gilani should step down from Senate’s seat because the Pakistan Peoples Party had lost morality after suspicious video of Ali Haider Gilani, he stated. Appreciating his party leadership, he said Imran Khan is a bold leader of Pakistan who made unprecedented campaign against corruption.

Commenting on open balloting system, he said Pakistan Tehreek e Insaf (PTI) leadership had tried well to introduce open balloting for Senate elections. Open balloting was the only way to stop horse trading like issues in the country, he remarked.

About the vote of confidence in the assembly, he said Imran Khan has made history as no political leader in the country had moral courage to take such a bold decision, he added.

The minister said that Imran Khan was the only person who could change the obsolete rotten system whereas the opposition alliance represented the forces of darkness, which believed in horse-trading, rigging, bullying and violence to manipulate the election results.

About the defeat of Dr Hafeez Shaikh in Islamabad, he said the PTI leadership was holding consultations and it would finalise the future strategy. About the results in Khyber Pakhtunkhwa, he said the opposition parties were divided and they did not vote for each other’s candidates.

Reacting to the upset defeat in the National Assembly several other PTI leaders, repeated the call for transparency in the election process. “We want elimination of corruption at every level but the opposition is out to protect the corrupt practices,” Senator Faisal Javed Khan told reporters.

Khan congratulated PTI’s Fauzia Arshad for securing 174 votes to win the women’s Senate seat from Islamabad, saying that her winning margin was evidence enough that “there was a clear horse-trading on the men’s [general] seat”.

Special Assistant to Prime Minister (SAPM) for Political Communication Shehbaz Gill said that once again votes were sold in the Senate election. “Imran Khan proved to be true. After the video came out, it became clear that Gilani was buying votes,” he added.

In Lahore, Special Assistant to Punjab Chief Minister Dr Firdous Ashiq Awan also expressed similar views, while talking to reporters. She regretted that politics of the opposition parties was based on protecting the vested interests.

Balochistan Chief Minister Jam Kamal Khan told the media persons in Quetta that allies at the provincial level jointly contested “these elections and won”. He added: “All allies worked hard which led to this success.”