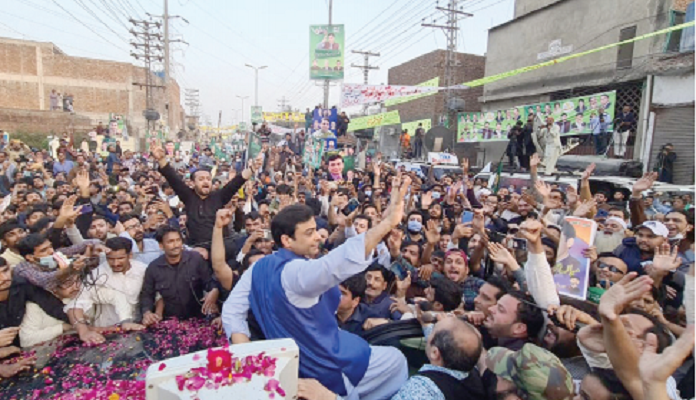 Leader of the Opposition in Punjab Assembly Hamza Shehbaz on Saturday was set free from Lahore's Kot Lakhpat jail on bail after being in custody for 20 months in a money laundering case against him.

Accountability Court judge Akmal Khan had ordered the release of the PML-N leader after approval of his bail bonds.vHamza is required to appear before the court on March 4 for the next hearing in the case.

On Wednesday, the Lahore High Court (LHC) had granted bail to the PML-N leader in the money laundering case and ordered the prison authorities to release him after the submission of bail bonds.

A two-judge bench had announced the order after the lawyer for the National Accountability Bureau completed his arguments during the hearing.

On Saturday, the PML-N workers who had gathered outside the Kot Lakhpat jail to welcome the release of their leader danced and showered rose petals on him.

Speaking to his party workers, Hamza termed his arrest a “farce” and maintained that "today the whole nation saw the logical end of this accountability drama.”

He said despite three years of the “worst victimisation”, the authorities could not prove a penny's worth of corruption against Nawaz Sharif's soldiers and the Sharif family."

Censuring the PTI-led government, the PML-N leader alleged that the "hired spokespersons" of the premier continued to lie about cases such as the Broadsheet or the claims made by the Daily Mail against Shehbaz Sharif. Hamza said the government’s action were based on revenge and seemed to be escalating.

"When nothing is found, then he [Premier Imran Khan] is angered, and that anger is vented out on Pakistan's 220 million people."

Speaking about the recent Daska polls, he said the people of Nowshera had rejected the PTI and backed the PML-N.

Earlier, while speaking to media outside her residence in Jati Umra before setting out to meet her cousin, PML-N Vice President Maryam Nawaz hailed him saying “Hamza has faced with bravery the fake cases” against him.

“[I am] really happy on his [Hamza’s] release. Together we will do more for the party. He was innocent but still he was put behind bars for two years.”

Maryam said that the incumbent government could not win the Daska by-polls despite “rigging” and decided to “challenge the election commission’s decision because they were caught red-handed”.

He alleged that Prime Minister Imran Khan had been “targeting” the PML-N leaders but their resolve had grown stronger with the passage of time.

Earlier this month, Hamza had filed second petition with the LHC for post-arrest bail on merit in the reference related to money laundering and owning assets beyond means.

The bail had also been sought on an additional ground of hardship and inordinate delay in the trial proceedings as the Supreme Court in January had rejected giving relief to the petitioner with a direction to approach the high court with fresh grounds for bail.

It said the charges were framed on November 11, 2020, after an "unconscionable delay" of 17 months.

The petition further noted that the delay could not be attributed to the petitioner in any manner whatsoever. It argued that the petitioner was entitled to bail on this ground of delay alone without touching the merits of the case.