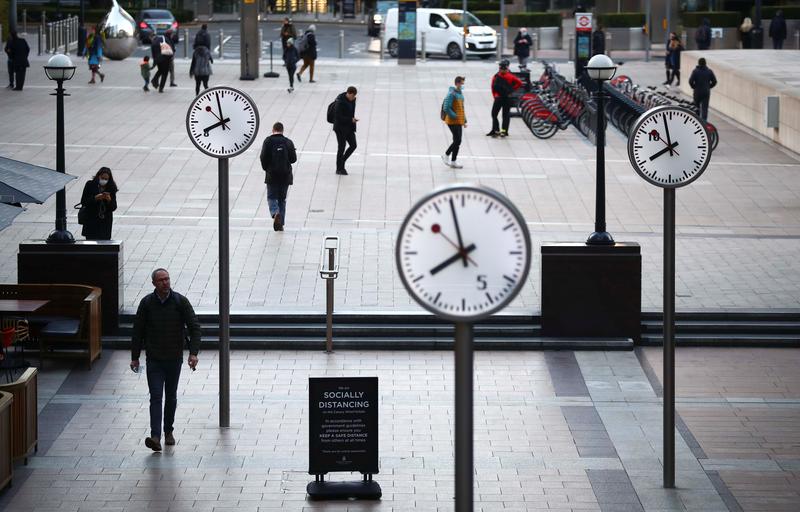 People walk during the morning rush hour in the Canary Wharf amid the outbreak of the coronavirus disease (COVID-19) in London Britain. PHOTO: REUTERS
LONDON:

Tens of millions of workers in developed economies will have to retrain for secure careers in post-COVID labour markets reshaped by the pandemic and the remote working revolution, a report by consultancy McKinsey said on Thursday.

The analysis by MGI, McKinsey’s economics research arm, concluded the pandemic’s biggest impacts will be concentrated in four work areas: leisure and travel venues; on-site customer interaction such as in retail and hospitality; computer-based office work; and production and warehousing.

Its scenarios suggested more than 100 million workers in the countries covered by the study - Britain, China, France, Germany, India, Japan, Spain and the United States - may need to switch occupations by 2030, up to 25% more than expected pre-pandemic.

“These workers will face even greater gaps in skill requirements,” it warned, noting that job growth may concentrate more in high-wage jobs as middle- and low-wage jobs decline.

“Workers without a college degree, women, ethnic minorities, and young people may be most affected,” it added.

Other types of work - such as medical care and personal care - may see less change because there is little alternative to the high level of proximity they require.

Overall, the study found that remote work and virtual meetings are likely to continue - less extensively than at the pandemic’s peak but still with considerable knock-on effects for real estate, business travel and urban centres.

While leisure travel and tourism are seen rebounding, McKinsey estimated some 20% of business travel may not return after the pandemic as companies and workers acknowledged a lot of earlier travel for face-to-face meetings was superfluous.

“This would have a significant knock-on effect on employment in commercial aerospace and airports, hospitality, and foodservice,” it noted.