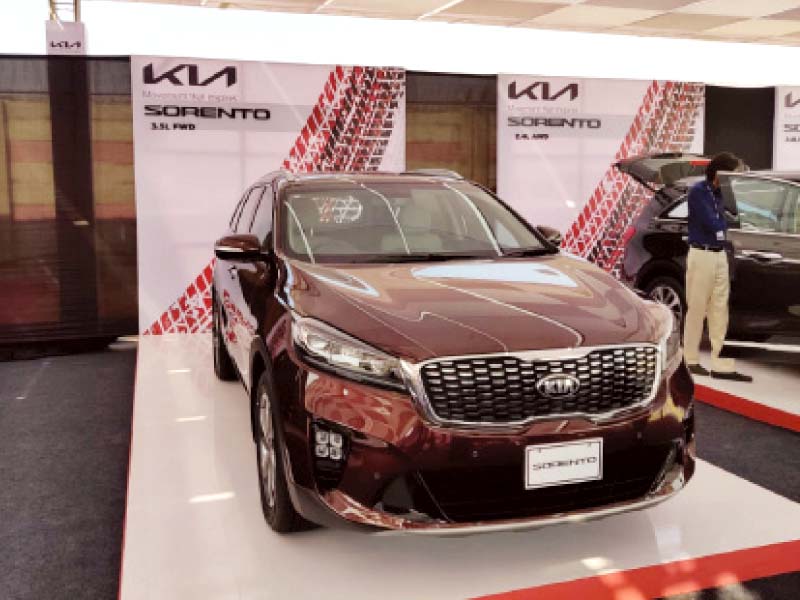 The Sorento model by KIA is a seven-seater SUV that will be available in three variants and seven colours. PHOTO: EXPRESS
KARACHI:

Lucky Motors is planning to launch Kia Sorento model to give competition to Toyota’s Fortuner variant.

According to a report released by Arif Habib Limited (AHL) on Monday, the company will launch the variant on February 19, 2021. The market also expects the car company to introduce another model called Cerato by June 2021.

Pakistan introduced an automobile policy in 2016 to attract new players to the country in a bid to deepen competition among automobile firms and to offer latest technology to customers.

He detailed that in this regard, Pak Suzuki launched newer variants of Wagon R, Cultus and Alto.

On the other hand, Indus Motor Company updated its Corolla model and introduced Yaris.

Honda Atlas is also expected to follow suit and introduce a fresh City variant later during the year after it launched 10th generation Civic.

He said that the automobile sector of Pakistan was on a growing trajectory and car sales during 2021 were projected at 200,000 units.

The current market situation is in favour of all players in the automobile sector as companies are reaping benefits of a lower policy rate, said AHL analyst Arsalan Hanif.

“Similarly, new players are receiving overwhelming response from customers because they have introduced diverse options in the market with better specifications and a good value for money,” he said.

The analyst pointed out that new players were bridging this import gap while existing player maintained sales growth.

“As the pressure on existing players is increasing, they are launching new vehicles with better facilities to keep their market share intact,” he said. The Sorento model by KIA is a seven-seater SUV that will be available in three variants and seven colours.

“We expect the price to be around Rs7-8.5 million,” said AHL report.

The company’s plant has been operating on a double shift capacity since January 2021.

Pakistan Electric Vehicles Manufacturers Association (PEVMA) Chairman Sabir Shaikh said arrival of new players in the market is encouraging for consumers as new technology and better variety of models are available to them.