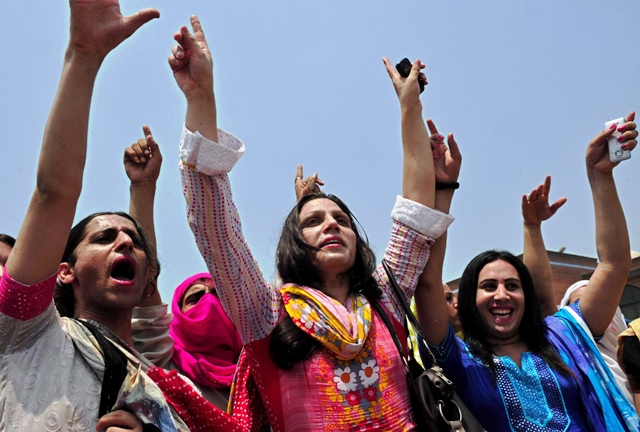 The transgender community in Pakistan has struggled and fought for inclusion in society for decades. PHOTO: AFP
LAHORE:

For transgender person Bali Jetty, learning the art of embroidery brought gradual respite from the banality of the stereotypical roles. Unfortunately, the transcendence proved to be short-lived as the work came to a standstill during the coronavirus pandemic.

The biggest dilemma of the transgender community is a lack of acceptance in the society. They even struggle to gain recognition from their own kith and kin.

“We earlier used to attend various events across different villages in Punjab. We received tips for performing at weddings, birth of a child, etc. The pandemic stole away from us the only known means of sustenance.”

In a posh area of Lahore, social activist Anusha Tahir Butt has started imparting vocational training to transgender community members at her own residence. Not only that, she has made arrangements for their learning of the Holy Quran as well.

Talking to The Express Tribune, Butt said that she had wanted to do something for these marginalised people since a very long time.

“For me, it is a dream come true. So far 10 to 15 transgender people have learned sewing and embroidery, while others are also learning the skills. Apart from getting religious education, they are also taught how to make decorative pieces.”

She continued that the government has gradually recognised the status of the community members and legislation has been enacted regarding their rights.

President Good Thinkers Organisation of Pakistan, Waqas Abid, said that during COVID-19 pandemic, his organisation interviewed 353 trans people in different cities of Punjab including Lahore. According to the data gathered, 97 per cent of the community members said they did not receive assistance under the Ehsaas programme.

The interview revealed that 57 per cent of the transgender community members were dissatisfied with the medical facilities provided by the government. It mentioned that 26 per cent of them were treated unfairly in recreational areas, parks and seminaries.

The organisation stated that the most common complaints were regarding derogatory treatment at mosques and other religious places, with around 52 per cent saying they do not travel in public transport owing to similar reasons.

According to the survey, 49 per cent also complained of sexual and physical violence during the pandemic. Interestingly, 51 per cent said they had suspended their activities during this period and as a result did not face harassment. The data recorded that only 29 per cent of the members said they received cash and assistance from various NGOs and philanthropists. An almost same number of members said they received no aid. A significant proportion, 45 percent, said aid was given in their area but they could not get it on the basis of their “trans” identity.

During the pandemic, it seemed as if the community members left the stereotypical profession of dancing and attempted to acquire new skills. Transgender persons are also increasingly seeking religious education these days.

Shama Jan is a local guru of the transgender community members, hailing from Multan. Jan shared that her family had disowned her on the basis of her gender.