Says all options on table to oust govt, including wheel-jam strike 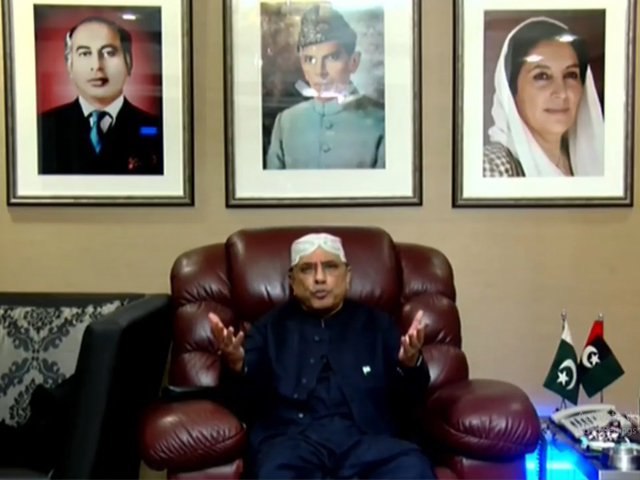 In a bid to dispel rumors of a discord in the Pakistan Democratic Movement (PDM) parties over bringing a no-confidence motion against the ruling Pakistan Tehreek-e-Insaf (PTI), Pakistan Peoples Party (PPP) Co-Chairman Asif Ali Zardari on Sunday declared that all options were still on the table including a no-confidence motion, resignations, long march and even a countrywide wheel-jam strike.

Zardari during a telephonic conversation with PPP Punjab leader Chaudhry Manzoor dismissed speculations of a rift between his party and the Pakistan Muslim League-Nawaz (PML-N), saying that the PDM was united and would “attack” the PTI-led government from all sides.

Reports of differences between both the parties emerged on Saturday after PML-N’s Ahsan Iqbal disagreed with PPP Chairman Bilawal Bhutto Zardari’s recommendation of tabling a no-confidence motion in parliament, instead of organising protest rallies across the country to remove the ruling party from power.

According to the statement, the PPP co-chairman stressed on sending the incumbent regime packing saying “their ineptness and incompetence can land (the) country into a mega crisis”.

Zardari emphasised that the PDM would utilise all available options to “rid” the country of the ruling PTI government.

“Few months are crucial for the country’s politics. We will not let this government hide behind coronavirus anymore,” the PPP co-chairman was quoted as saying.

He recalled that despite global economic crises the PPP government had taken the exports of the country to $26 billion from $19 billion during 2008.

“We doubled the revenues, doubled pensions of retired government servants and enhanced the pay of civil servants by 125%.”

Censuring the PTI-led government, the PPP co-chairman said that it had brought down all economic indicators.

“Neither the government has been able to procure coronavirus vaccine nor have they been able to do anything for the underprivileged except for our (PPP) initiated Benazir Income Support Programme.”

The PPP co-chairman said that he had foretold that the incumbent regime would “fall under its own weight”.

“The PTI government has fallen. Only a last push is needed.”

He said the PPP along with the PDM would “send this incompetent government home”.

Chaudhry Manzoor while talking to The Express Tribune said that in an unscheduled telephone call from the PPP co-chairman that lasted over 15 minutes, they discussed various political issues.

He said the party co-chairman told him they stood behind the PDM and would use all available options to send the government “packing”.

“[The option of] resignation and long march is still on the table. We will put forward our suggestion before the PDM and then a final decision will be taken with consensus,” he said.

Commenting on the ruling party’s stance that there was a “rift” within the PDM, Manzoor remarked that there were different political parties in the 11-party opposition alliance with different points of view “but those views, opposing as they may sound, should not be misconstrued as disagreement”.

“The Senate elections will expose fissures in the government, which is when the option of no-confidence motion can bear fruit.”

While talking to The Express Tribune, Iqbal said since PDM took all its decisions with mutual consent, the PPP’s suggestion of no-confidence motion was not a matter of concern.

“If PPP has a surprise up its sleeves regarding the no-confidence motion then it should bring it on the table.”

The PML-N leader recalled their “bitter” experience in the upper house when opposition had fallen three votes short during the no-confidence motion against Senate chairman in a secret ballot and maintained that they were not in favour of the option.

Iqbal said the next meeting of the PDM leadership will be held in the first week of March to discuss the future course of action.

Meanwhile, it was reported that Maryam Nawaz would be meeting with the parliamentarians to discuss the issue of in-house change and no-confidence motion.

PML-N spokesperson Marriyum Aurangzeb while talking to The Express Tribune said that Maryam Nawaz had been invited to attend a parliamentary party meeting of National Assembly and Senate on Monday (today).

Marriyum further observed that parliamentary party meeting was not the forum for discussing the PDM’s future strategy.